Boston Celtics signed Tacko Fall because he has all the predispositions to play basketball and immense talent for the sport on top of that. What they probably didn’t know is that he has musical talent as well. Fall showed that he is capable of conducting an orchestra. During the Boston Pops concert, he was brought on stage to perform one piece at their holiday concert.

Tacko led both chorus and orchestra during the interpretation of Sleigh Ride. The event was held at Symphony Hall in Boston. Fall, as tall as he is attracting attention wherever he goes. It’s no wonder that he was the star of the night when he put an excellent performance on stage. Celtics player spiced the entire act by making a spin move while on stage and waving to the crowd. 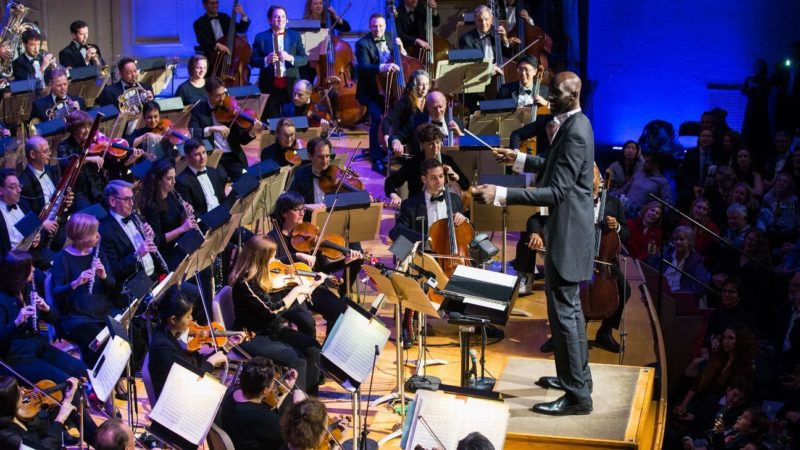 It is an understatement to say that the crowd was amused. Fall was already funny enough towering meters above the orchestra, but when he started to give musicians cues, the mass was out themselves from laughter. The effort was there, but Tacko was quite late on some of the beats. Nonetheless, everyone entertained to heir fullest.

In an interview, Fall gave to The Boston Globe, the player stated that this was his first time wearing a tuxedo. Celtics center says that he received compliments wherever he went.

According to Boston’s biggest attraction, he didn’t come unprepared. Tacko watched videos of Shaquille O’Neal to better prepare for the event. In 2010 former Los Angeles Lakers and Boston Celtics big man also participated in this event.

Tacko Fall leading the orchestra through “Sleigh Ride.” He even threw in a little spin. pic.twitter.com/2cXRKbpHbh

Despite going undrafted during this year’s draft, Tacko Fall is garnering more attention than some of the high picks. Fall joined the Celtics summer league team and work hard for a contract. Tacko signed a one-year two-way contract. This means that he is eligible to play for both Celtics and their G-league affiliate Maine Red Claws.

Today, after his Symphony Hall performance Tacko Fall at least knows that there is life outside basketball. He is born to be a star.

Leighton Vander Esch Is Out For The Season