NDTV – 05/26/2020: Donald Trump and the media. Name a more hating duo. You can’t. According to POTUS, they are always on his throat, and just won’t leave him alone. On the other hand, media outlets criticize the President’s every move.

During the weekend, Mr. Trump indulged himself with a game of golf. It was Memorial Weekend, and next year during this same period, we could have a memorial for those 100 thousand who died from coronavirus. Media were all over POTUS for his carelessness. 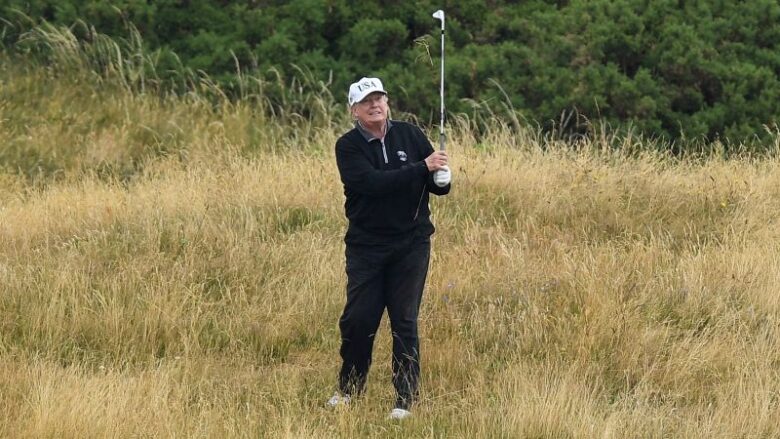 This was Donald Trump’s first game of golf since March, and he didn’t want to be criticized for it: “The Fake and Totally Corrupt News makes it sound like a mortal sin!” While playing golf isn’t a sin, the moment was all wrong.

The issue that “fake news” as Trump calls them brought out was Trump’s tweets from 2014. Back then, POTUS criticized Barack Obama for playing golf during the Ebola outbreak, a crisis that was quite smaller than the one we have now.

Some stories about the fact that in order to get outside and perhaps, even a little exercise, I played golf over the weekend. The Fake & Totally Corrupt News makes it sound like a mortal sin – I knew this would happen! What they don’t say is that it was my first golf in almost…

This is what Trump said in 2014: “There are times to play and times that you can’t play. It sends the wrong signal. You know when you’re president you sorta say, like, ‘I’m gonna give it up for a couple of years, and I’m really gonna focus on the job.'”

….3 months and, if I waited 3 years, they would do their usual “hit” pieces anyway. They are sick with hatred and dishonesty. They are truly deranged! They don’t mention Sleepy Joe’s poor work ethic, or all of the time Obama spent on the golf course, often flying to….

Trump is under fire for his hypocrisy, but he decided to fire back. In response to the media, Donald Trump wrote: “I knew this would happen! What they don’t say is that it was my first golf in almost 3 months, and, if I waited three years, they would do their usual ‘hit’ pieces anyway.”

I don’t often defend this @POTUS but I don’t begrudge him a round of golf.
Besides, it gives the rest of us a respite from those crazy tweets!

Not everyone wanted to criticize Trump. Former Barack Obama adviser, David Axelrod, defended him: “I don’t often defend this @POTUS, but I don’t begrudge him a round of golf.”

5 Things to Have in Mind When Booking Your Next...

What Are Polarized Sunglasses?