Did Ivanka Trump Used Her Position to Advertise Her Jewelry Company?

EXPRESS – 04/08/2020: Ivanka Trump, just as her father Donald Trump, isn’t only employed by the US government and people; she also has private ventures. One of them is her jewelry company, which allegedly sent out an email to their customers trying to sell a piece of jewelry that the first daughter wore after her father was elected President.

We are talking about a gold-and-diamond bangle that is worth staggering $10,800. Ivanka had it on during the 60 Minute interviews, which included all members of the Trump family. The book, Kushner Inc claims that her jewelry company immediately after the show started advertising the bracelet. 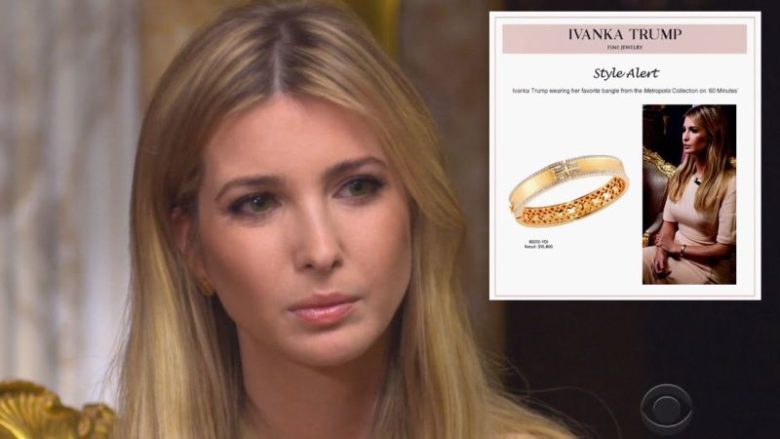 Because of this move, Ivanka Trump was accused by her critics for trying to use her political position for personal gain and to earn additional money. Her business venture regarding jewelry started back in 2007 in cooperation with Dynamic Diamond Corps. Her first line of diamond and gold jewelry was soled at an exclusive Manhattan store.

Another store was opened at 109 Mercer Street, in Soho district, which was even larger than the first one. By 2015 the store was out of business and closed. The only store remaining that sold Ivanka’s jewelry was located at her father’s building, the Trump Tower.

In 2017 even this one was closed. We can’t tell if the went out of the business for financial reasons or because of Ivanka’s political career. This wasn’t the only instance that Ivanka mixed her political life and business.

At on point, she had presidential adviser Kellyanne Conway advertise her on Fox News. Conway said: “Go buy Ivanka’s stuff. I’m just gonna give it a free commercial here, go buy it today, you can buy it online.”

Are Solar Panels Difficult to Maintain?

This Guy Has Bought a Tank to Help Him in Quarantine