Daily Mail – 01/15/2020: It’s not difficult to put social media in a frenzy. It’s especially easy if you are Donald Trump, or if you are somehow related to him. During the LSU-Clemons game, President Trump was approached by famous actor Vince Vaughn. You can guess that Twitter exploded when photos of two of them surfaced.

The presidential couple and the Delivery man actor shared a lodge at Mercedes Benz Superdome. They shook hands and exchanged pleasantries, which put Vaughn under the spotlight. There were those who criticized him for socializing with the 45th US President while others were judging those who criticize him. An all-around Twitter mess. 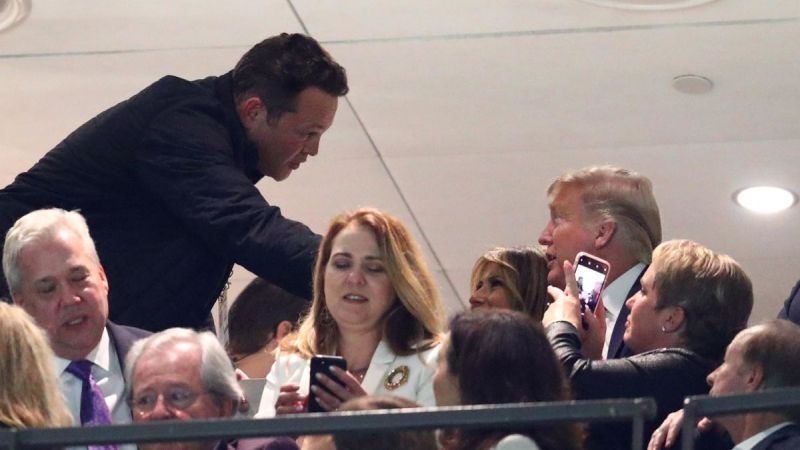 Their exchange was not long, as Vaughn was seen leaving the lodge soon after. But, the damage to his public image was already done. The first one to attack Vince was a Florida journalist Timothy Burke. He shared the video that showed the actor and Mr. Trump on Twitter and wrote that he’s sorry that he must share this video with his followers.

Others believed that Vaughn should have attacked POTUS for all of his wrongdoings instead of being greeted as the best President ever. There were even those who fell betrayed by Vaughn. Let’s say that there were even broken hearts.

I'm very sorry to have to share this video with you. All of it, every part of it. pic.twitter.com/ELMbDHZbZq

Of course, there were those who saw nothing wrong with what happened. They concluded that two grown men shook hands, said some meaningless things, and moved on, concluding that most people would do the same. It was professional from both ends, another Twitter user added.

Actor Vince Vaughn filmed here having a civil chat with the President of the United States.

Timothy below clearly thinks this is a moral outrage, civil conversation? Outrageous! Clearly, Mr Vaughn must now be cancelled.

Seriously, the culture these people are creating is toxic. https://t.co/gGyjQa9QZn

We’re not sure how much will either Trump or Vaughn be worried about this. Both met another famous person, made acquaintance, and watch an exciting game of college football. Both men will be pleased that it was LSU Tigers who took the win, and in the end, it should be the only thing that matters.