CNN – 02/05/2020: The feud between Nancy Pelosi and President Donald Trump continues. After POTUS finished his State of the Union Speech, House Speaker Pelosi ripped apart her copy of Trump’s speech.

The move was not expected either by Republicans or Democrats. It looked like something President Trump would do. Never before in the history of the US, a House Speaker did anything like this. 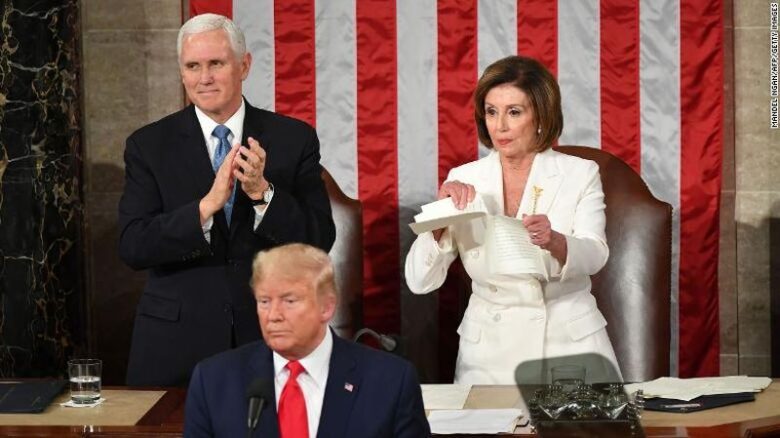 Now that dust settled, this move by Pelosi can be described as adequate. The news is filled with more stories regarding this than they are focused on Donald Trump’s speech. Liberals comment that passion like hers is always welcomed. Furthermore, it seems both Republicans and Democrats insist on talking about what Pelosi did. If you want the news to be filled with stories of you as they are with Trump articles, you need a move from his playbook.

According to Steve Doocy of Fox, House Speaker Nancy Pelosi knew what she was doing. Her act gave newspapers a story to write about. It was something POTUS would do to distract attention from something that’s right before people’s eyes. President was giving State of the Union speech, and hardly anyone talks about it. Instead, Pelosi fills the newsstands.

The manifesto of mistruths presented in page after page of the address tonight should be a call to action for everyone who expects truth from the President and policies worthy of his office and the American people. #SOTU https://t.co/7rUFbhWDDQ

This is only a continuance of their feud, but it got on a whole other level. Republicans claim it was Pelosi who started it with her role in trying to impeach Trump. The other side claims it was President Trump, who abused the law. Another thing people resent to Trump is the fact he refused to shake hands with Pelosi before giving his speech.

Nancy Pelosi claims she did the right thing by ripping Trump’s speech into pieces. She argues that there was no point in keeping her copy as it’s nothing more than a ‘manifesto of mistruths.’ What Pelosi did had the desired effect on Mr. President as he can’t stop tweeting about her.