Ezekiel Elliott was spotted at Dallas Mavericks game in high spirits. Camera at the American Airlines Center caught him with a huge grin on his face. This wouldn’t be a surprise as he sells his trade in the same city. What is shocking is how relaxed he was only four days before Dallas Cowboys’ biggest game of the year.

Popular Zeke had courtside seats and was the star of the night. At least star among the crowd. During Mavericks vs. Celtics game Elliott seemed as calm as one can be. Entire Cowboys fanbase is on their feet waiting for Sunday’s showdown with NFC East rivals Philadelphia Eagles. Ezekiel looked like he has no concerns over Cowboys next game whatsoever.

At first, he just sat there smiling, enjoying the game. Later during the evening, he walked around chatting up players. At one moment, he even did his signature ‘feed me’ gimmick while the jumbotron camera was focused on him. All signs that he is not caring much for Dallas’s next game were there. Or it’s just that he’s confident in his ability and his teammates that victory is theirs. 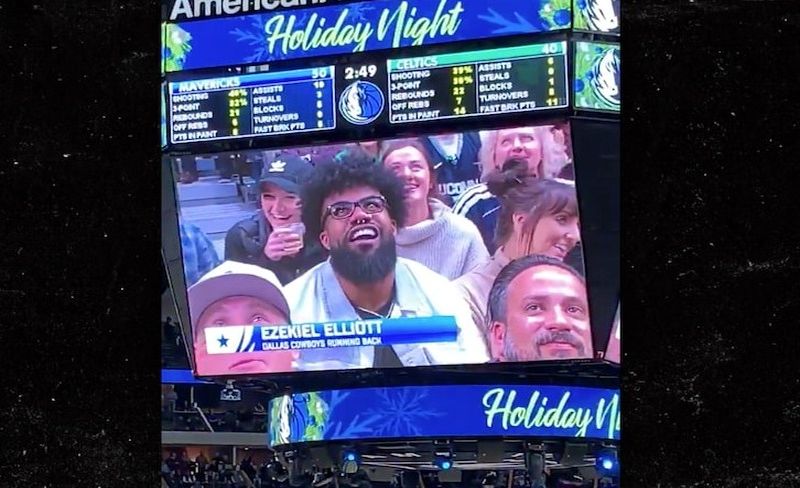 All of this could be concluded only by looking at him. But the thing may be that he’s only relaxed on the surface. Professional such is he could hide his real feelings. Elliott is probably nervous and excited for the Cowboys vs. Eagles match as all of us are.

There are only two weeks left in the NFL season. The fate of the NFC East will be settled in a direct duel between Cowboys and Eagles. Zeke and The Boys need a win to clinch their division and schedule a playoff match in January. If they lose, the season is over. With potential Dallas Cowboys showed this year, it would be a shame not seeing them in the playoffs.

During the Wednesday, Cowboys had training sessions. Zeke was one to talk with reporters afterward. League’s best-paid RB said that his body feels great and that he’s ready for the season finale.

All we can hope that Cowboys won’t disappoint their fans as Mavericks did. Dallas basketball team lost to Boston Celtics 109-103. As two sports have little in common, we won’t take this as a bad omen. We’ll be wishing all the best to Cowboys in their next match.