EXPRESS – 01/09/2020: A giant wooden statue that represented the US President Donald Trump posing as Statue of Liberty was burned in Slovenia. The statue was built there as the First Lady was born and raised in this Balkan country. According to sources, this criminal act was done by vandals.

The statue aimed to depict the 45th US President while mimicking the famous Statue of Liberty. It has a bit spiky hair, and one of its hands is pointing towards the sky. The Trump Statue was built last year in a small village in Northeast Slovenia. As we mentioned, this is the homeland of the first lady, so it’s no wonder they wanted to pay homage to Donald Trump. Police say the investigation is ongoing and they are looking to catch the culprits behind the crime. 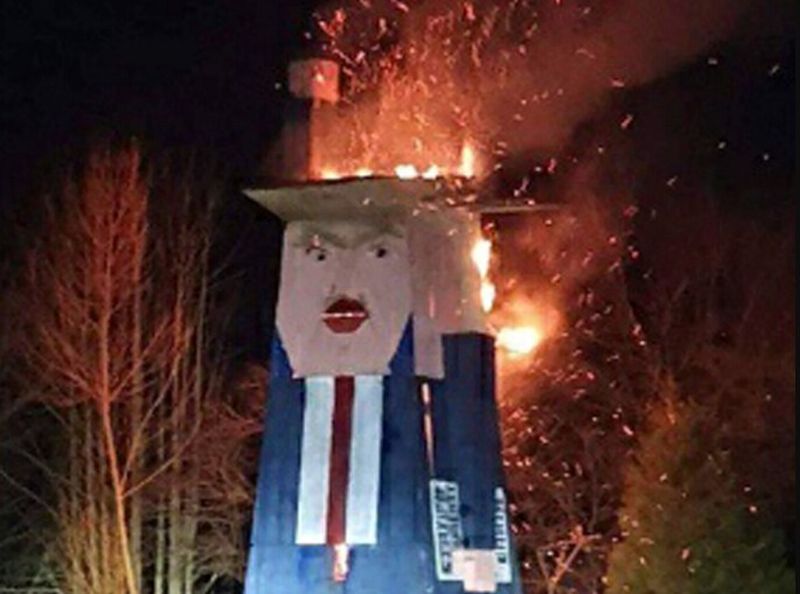 The statue is vaguely Trump-looking. They tried to show Mr. President in his navy suit, with a white shirt and a red tie. Statue’s hair is also faithful to the original. It is equipped with a mechanism that can move his lips, showing off his white teeth. The creator of this statue is an artist named Tomaz Schlegl.

The creation was showcased in a small village called Sela pri Kamniku last August. This village is located northeast of the Slovenian capital Ljubljana.

According to the artist who made the statue, it has two faces. The one is the friendly face that you can usually see, while the other one is the face of a vampire. In an interview with AFP, Tomasz stated that his goal when making the statue is to voice an opinion on populist politics.

The same artist claims that populism is once again ruling the world. Schlegl is claiming that society is going in a new direction led by populist leaders such as Donald Trump, Victor Orban, and Boris Johnson.

The statue was a popular tourist attraction, but it soon started to bother the village people who threatened to burn it on Halloween last year. Because of the security risks, it was moved to the village called Moravce. But it suffered the same fate as it was burned down in the act of political intolerance.

The Famous Model Claims Her 14-Year-Old Daughter Is Ugly and That She’ll Pay for Her Botox and Fillers!