Glorious days for Donald Trump. The 45th US President was awarded the highest certificate in taekwondo. An interesting note is that he never practiced the sport. It is just like Trump to accept a reward he didn’t earn, but we must wonder what were the people in charge thinking when making this decision.

Upon receiving the award, trump said: “It is my honor to receive Honorary Dan Certificate and I think Taekwondo is magnificent martial art for self-defense.” The award was given to Trump by the South Korean president of taekwondo. We are talking about an honorary black belt for a man who never practiced the sport. The ceremony was held at trump’s Mar-a-Lago estate, where he was presented with the award by president Lee Dong-sup. What Trump received is the ninth-dan certificate, which is the highest level in taekwondo. 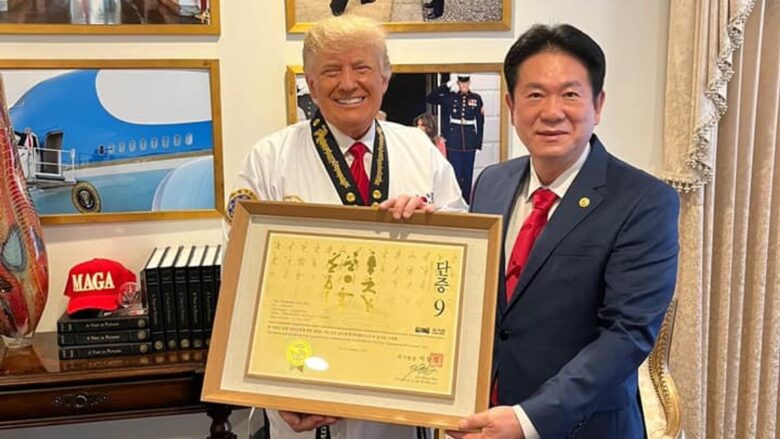 The sporting body of taekwondo released an official statement on their Facebook account. They wrote Trump’s word upon being honored: “It is my honor to receive Honorary Dan Certificate and I think Taekwondo is magnificent martial art for self-defense. I wish to see Kukkiwon Taekwondo Team’s demonstration.” The organization made a point of stating that this event is in no way politically oriented.

What’s even more interesting is that the same award was given to Russian President Vladimir Putin. The Russian leader received his award back in 2013. At that time it also wasn’t known if Putin had ever practiced taekwondo. At least he can say that he is a judo expert. To make things even more awkward, you should know that both of these world leaders now hold a higher rank in the sport than one and only Chuck Norris. 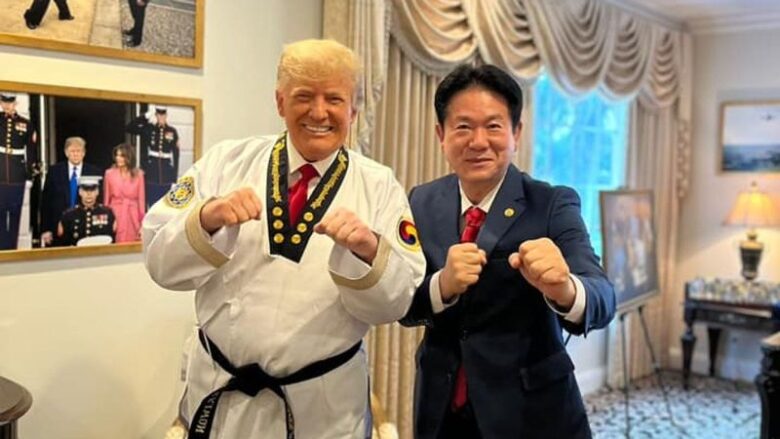 Like one could guess, this news didn’t sit well with people who actually practice this sport. One Twitter user wrote: “As someone who actually earned their blackbelt in TKD, I’m not happy about this. The 9th degree is grandmaster rank. Unbelievable.” Unfortunately, we can assure you that Donald Trump won’t care. You can see how much he’s self-obsessed if you pay attention to the photos behind him. There are photos from his time in the office and moments that captured him greeting Kim Jon-un, The Queen, and Prince of Wales, and Duchess of Cornwall.

We’re not sure how Trump feels about this accolade, but as anything else glorifying him, we think he’s proud of his achievement. Maybe his fake belt will help him in launching the 2024 presidential bid. Knowing that Joe Biden is at full health and ready to go, must be pumping Trump’s blood, and now he apparently knows how to fight.

As someone who actually earned their blackbelt in TKD, I'm not happy about this. 9th degree is grandmaster rank. Unbelievable.

Why would an Asian American give any award to Trump after what he's done to vilify the Asian community?

No, tgf is not worthy of such an honor. https://t.co/PqZVAGkErV

Why Is The Concept Of Cryptocurrency Still Foreign To Most Americans