Donald Trump avoided public appearances since he left the White House. He didn’t have too many reasons to appear as he was still getting over his election defeat in the hands of Joe Biden. But, on Saturday he came to watch one of the biggest sports events of the year, the Conor McGregor vs. Dustin Poirier fight. Before this fight, he only appeared on a few rallies that were organized by him. The reaction he received at UFC 264 certainly pleased the 45th US President.

As we already said, the main card of the evening was the bout between Conor and Dustin, and Trump chooses this fight to make his appearance. The reception was quite better compared to when he last made an appearance at a UFC match. T-Mobile Arena was packed with MMA fans who cheered the former president. If you don’t trust us check out the video below and you’ll get an idea of how things went. 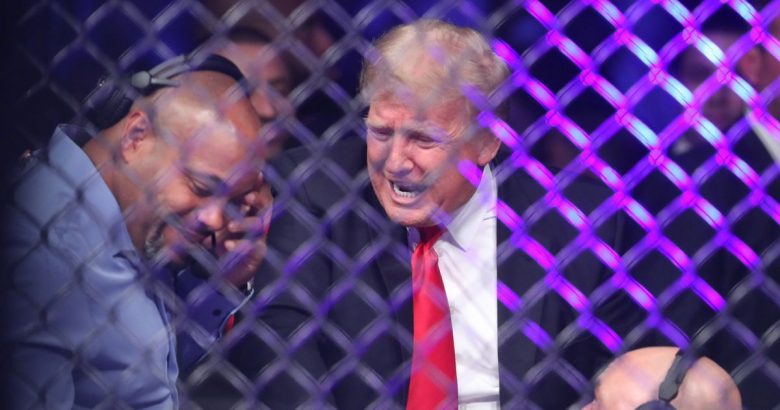 As he was greeted well one would expect that he would steal at least a piece of the show. That, however, was not the case as the attention didn’t turn to him once during the night. This comes as surprise as Dana White and Donald Trump are big friends and Mr. White supported his candidacy. He even announced before the bout that Trump will be in the crowd watching the match. As it was expected he received a reaction from the crowd. This usually happens, and depending on the venue he gets either supported or booed.

If you remember he was heavily booed at World Series at Nationals Park, while the crowd at Bryant-Denny Stadium cheered the president at the time. The UFC 264 night was his first public event since he left the office. While famous in his own right he was not the only one in attendance who is deemed a celebrity. The camera strolled through the crowd and we could see such names as Megan Fox and her boyfriend Machine Gun Kelly, NFL stars Baker Mayfield, Austin Hooper and David Njoku, actor Jared Leto, Travis Baker and his woman Kourtney Kardashian, the Paul brothers Logan and Jake who want to take on Conor McGregor or anyone from the industry willing to risk their legacy, and Sia among others.

Here is President Trump as he arrives on the floor at #UFC264 pic.twitter.com/AG81UaqrnK

They did not enjoy the full match as it all ended in the first round, in one of the more terrifying endings to an MMA fight. While the sport is violent, we can say endings as this one are not often to be seen. The fight ended after the first round as Poirier won via TKO after Conor’s ankle snapped. His tibia didn’t hold and Dustin was deemed a winner, as there was no chance of McGregor continuing.

While the injury was severe, there are already talks about another bout between the two fighters which would be their fourth match. McGregor proved to be a sore loser as he started threatening Poirier right after he lost while sitting in the octagon. Dana White confirmed that a match is going to be scheduled if both fighters are for it, as soon there are conditions to make things work. It remains to be seen how long will it take for McGregor to get better as he suffered a major injury. In addition, he lost the last two fights against Poirier, and his previous outings weren’t as great.

His last significant victory came against Donald “Cowboy” Cerrone, which is his only win in the last five years. While he remains a pay-per-view attraction and a real money-maker for the UFC, and himself, he’s doing no favors to his fighting legacy. Once considered one of the best fighters and trash talkers in the industry has come a long way where he can still talk the talk but is no longer able to walk the walk.

“Spiderman” Has A New Girlfriend