EXPRESS – 04/22/2020: Chelsea Clinton and Ivanka Trump were good friends back in the day. But the political careers of their parents, Donald Trump and Hillary Clinton put an end to that. The last time the two girlfriends were seen together in public was during President George HW Bush’s funeral in December of 2018.

The two of them were sitting close to each other at Washington National Cathedral. A video and photos from the event surfaced, and you can see Chelsea and Ivanka looking awkward. They exchanged a couple of words, but there was no more in-depth conversation among former friends. 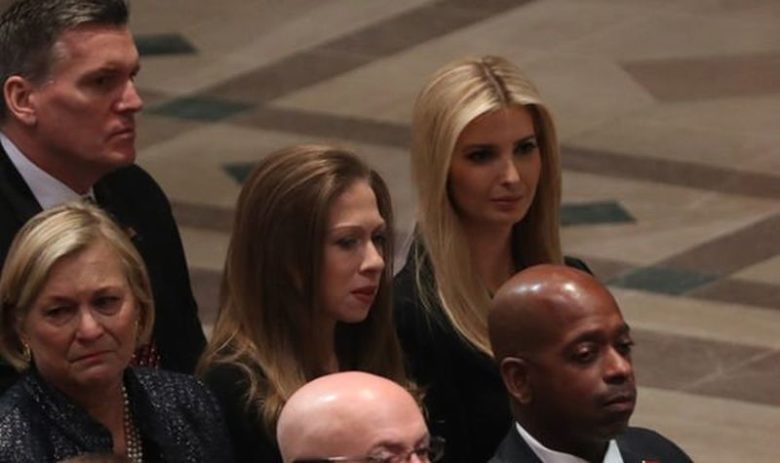 Putting them to sit next to each other must have been an omission on the part of organizers. Their friendship broke during Donald Trump’s campaign in 2016 when Hillary Clinton was on the other side of the spectrum. Ivanka is now an adviser in her father’s administration. The same administration, Chelsea Clinton, openly criticized.

As you probably know, Chelsea Clinton is the daughter of former President Bill Clinton and former Secretary of State Hillary Clinton. In 2016 Hillary run against Donald Trump as Democrat nominee in the presidential elections. The above-mentioned campaign put a dent in Ivanka/Chelsea’s relationship as Donald frequently called Chelsea’s mother “Crooked Hillary,” and called for her arrest.

Back at the day, Ivanka believed that their relationship would survive. During an interview with Fox News, in 2018, the first daughter said: “We support each other. We are not the candidates. We’re the children of the candidates, and we both respect our parents. We never talked about politics before this campaign, and I think it’s probably a good topic for us to avoid talking about now as well.”

Fast forward a few years, and Ivanka couldn’t be wronger. Politics destroyed their friendship beyond repair. Ivanka now supports her father’s regime and stands behind his every decision, while Chelsea is one of heir most prominent critics.

How to Hire a Website Designer and Not Get Burned