One week ago, you had the chance to witness a historic duel between New Orleans Saints and San Francisco 49ers. With the score being 48-46, you can bet that two quarterbacks, legendary Drew Brees and rising star Jimmy Garoppolo played lights out.

Jimmy G had four touchdowns in that game. This match was his third game of the year achieving this feat. In the mid-time, 49ers lost a close duel to Atlanta Falcons 29-22, but this doesn’t diminish how good Garoppolo was this year.

His team, the 49ers, are currently sitting at the top of NFC with an 11-3 record. Although they are leading their conference in the last three matches, they have two defeats. Regardless they are still No1 team in the National Conference and mostly thanks to their QB. 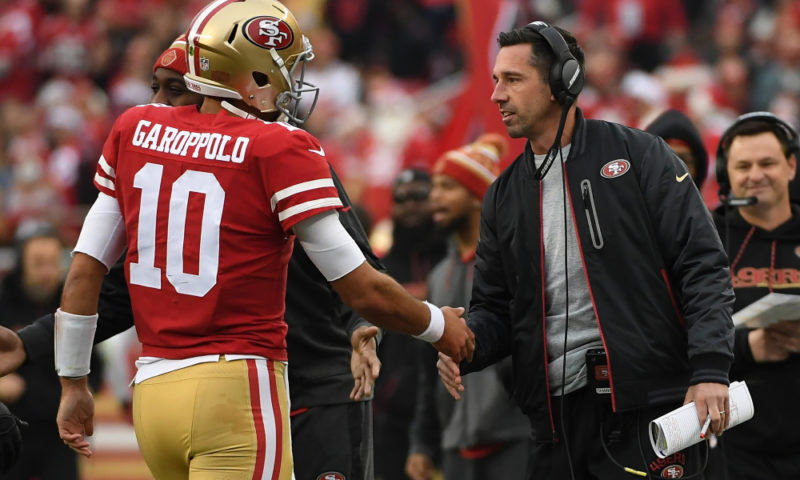 Jimmy G completed 69.5% of his passes for 25 touchdowns. He has 3.245 yards to his name and only 11 interceptions. He’s nowhere near being in the MVP conversation but is playing solid week in and week out. Fans and pundits both love him and believe he’s the future of 49ers.

Even after cementing himself as the star of SF franchise and their QB going forward, there are still those who doubt him. NFC offensive coach, who is currently working on a team, doesn’t quite believe that Garoppolo has what it takes.

Coach, who wanted to remain anonymous, said that Jimmy G had some excellent outings last couple of weeks, like the one against Saints, but he doubts that Garoppolo can do it consistently. He compared Brees with Garoppolo, claiming that what Brees is doing years back every week is something that Jimmy yet needs to do.

Also, he went further and claimed that Garoppolo belongs to the third tier of NFL quarterbacks.

Now, Jimmy G had up and downs during his NFL career, but he’s way above the third tier. Some would argue that Garoppolo is close if not within the group of league’s elite passers. At the moment, he is not closing the gap, if looking only at numbers, to likes of Lamar Jackson, Russell Wilson or Patrick Mahomes. But, he’s getting there.

Regardless of what some anonymous coach thinks, Jimmy has 19-4 record as a starter, and that means something in the world of professional football.

Next week 49ers play Rams and that’s another chance for Garoppolo to get closer to the elite QB group.

Baby Tries Pickle for the First Time and Can’t Let It Go!