Al Pacino is a worldwide famous actor. Deservedly so. His talent and passion for honing his acting skill separate him from other big names of his generation. Thanks to his hard work and dedication, he was nominated for the Academy Award eight times. Unfortunately, he managed to win only once.

As an actor with so much experience, he is in the right position to advise his younger colleagues. In one of his most recent interviews, Pacino said that if an actor wants to prepare for a role, all they need to do is to watch Lamar Jackson play football.

Most people expected that Al would say that the best way to prepare is to watch old movies or practice monologues. But, this was not the case. His comment on Lamar Jackson might sound surprising to many, but not to all. If you recall, Al Pacino played coach Tony D’Amato in a movie called Any Given Sunday. This movie is a pro football drama directed by Oliver Stone in 1999. 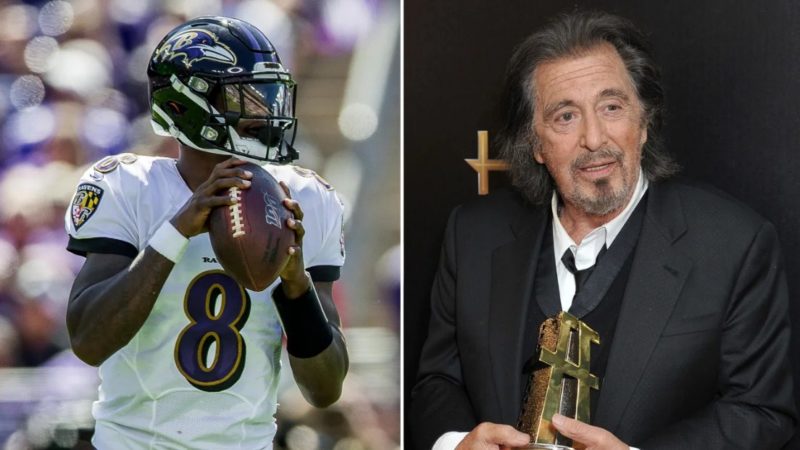 During a recent interview with The Ringer, both Oliver Stone and Al Pacino were talking about Any Given Sunday. This interview prompted Pacino to compare getting ready for a role with playing football.

When talking about Jackson, Al said that he is a generational talent who seems like he is enjoying every moment on the field. He continued by saying that the way Lamar plays should be inspirational to all people and that actors should be inspired by him. To watch someone play with such freedom and joy is something that anyone could look up to claims Pacino.

The movie Any Given Sunday revolves around Willie Beamen, who is played by Jamie Fox. Pacino sees similarities between the two as Willie was a third choice QB becoming starter, and Jackson waited for his chance behind Joe Flacco. Both players thrived after getting their chance.

Today, Lamar is the forerunner for NFL MVP, playing his best football week in week out. He’s playing football with great easy, which hasn’t been so far in the game, and because of that, Pacino notes that Lamar Jackson is a person and a star who must serve as an inspiration for all people, including actors.

Sofia Vergara Reveals Her Beauty Secrets: How to Get the Perfect Body Fast