The Kardashian family members are the most famous social media influencers, and they have a lot of power on the public around the world. They have large cosmetic and fashion companies that set trends among young people. But not everyone is obsessed with Kardashians – some people hate them for perpetuating unrealistic beauty standards.

“Keeping up with Kardashians” stars are open about plastic surgery they’ve had done, but what about Photoshop? Their excessive use of photo editing has been exposed countless times by the Internet.

Here are the top 10 Kardashian Photoshop fails exposed by their fans.

The Kardashians and Jenner’s are well known for having perfectly round bums. But are these bums the result of copious squats, plastic surgery, or something else entirely? Here’s a photo that Kylie posted with then-boyfriend Travis Scott at the premiere of his new film in Santa Monica. 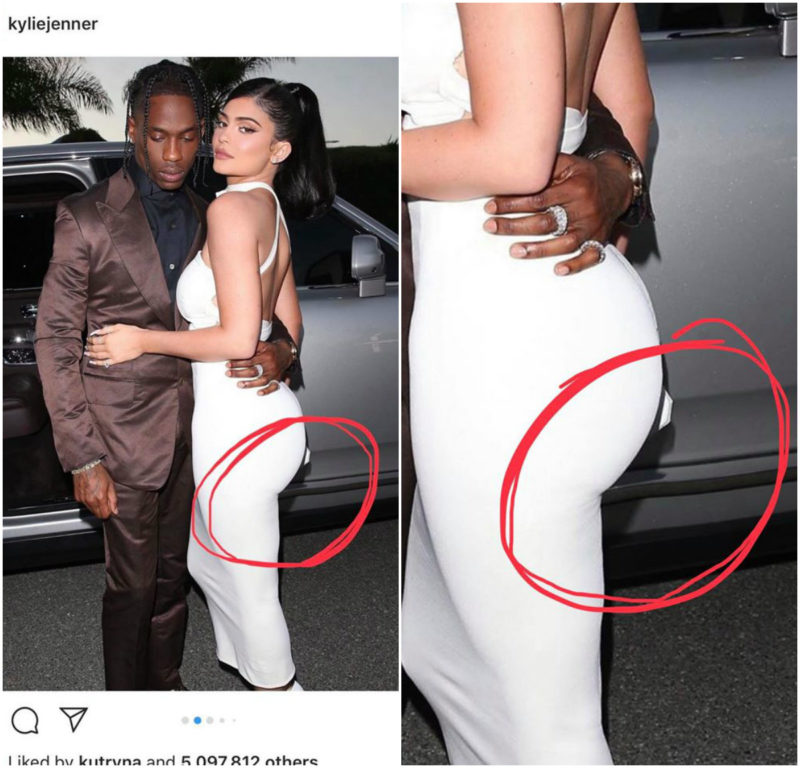 At first glance, everything looks lovely, but if you go and zoom into the car next to Kylie, you can see that the vehicle it’s distorted due to an attempt to make Kylie’s butt look a lot rounder.

Back in 2014, Kim was photographed with Jonathan Cheban on a boat in France. The caption was: “Fun night out with my best friend”. But upon closer inspection of the photo, it became apparent that Kim was missing her right arm. 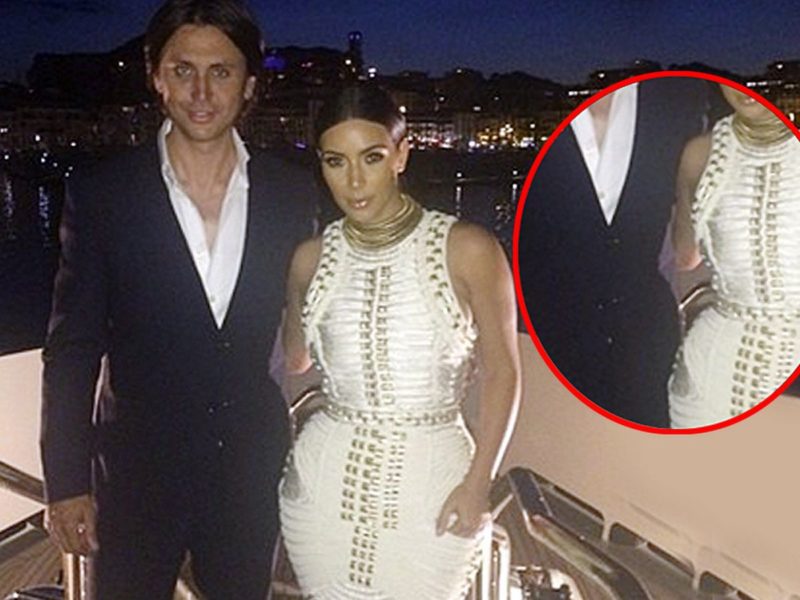 Kim actually ended up the caption of this photo to say: “Um, where’s my arm? So there was some speculation that this photo might not have been photoshopped, it could be just one of those optical illusions, or maybe Kim or Cheban did something to the picture to make his waist look thinner.

A 22-year-old Kylie had posted a photo on Instagram, posing next to her friend Anastasia on a daybed. It was taken on a girls’ trip to Turks and Caicos to celebrate the launch of Kylie skincare line. Everything looks beautiful, luxurious and normal until you zoom into the photo. 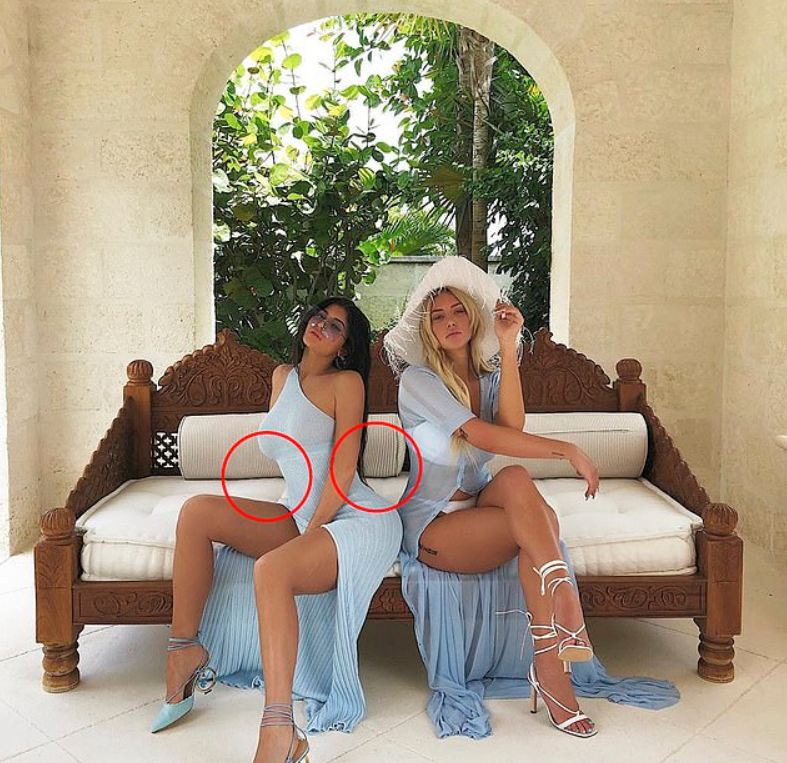 Fans noticed something very wrong with the pillows on the daybed. The pillow to the left and right of Kylie’s body is textured with lines that are not straight. This is because Kylie took in the sides of her waist, which inevitably changed the shape of the pillow pixels.

7. “Keeping Up With Kardashians” Sweet 16 promo

This photo is pretty famous and iconic, but not because the Kardashians look great in the picture. It’s because of several obvious Photoshop fails. 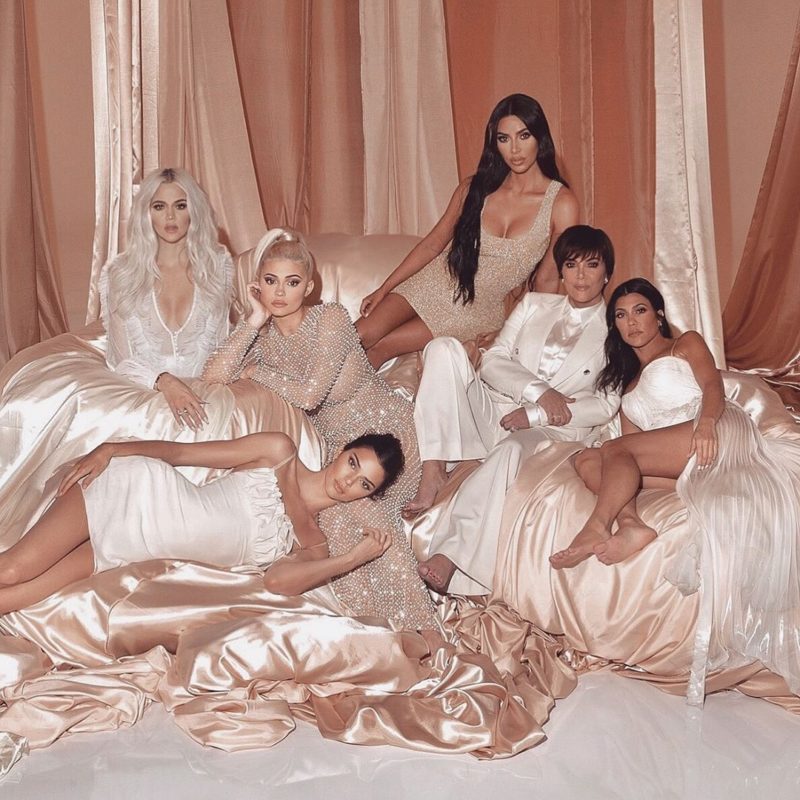 The first one is Kendall, who looks like she wasn’t present for the shoot and was just photoshopped lying down. She’s laying on a bunch of silk that doesn’t seem to be affected by her body.

Khloe Kardashian also looks very strange in this photo. Fans were asking themselves where is the rest of her body.

Also, Kourtney’s foot is something that caught Internet users’ attention. There are six toes! But this isn’t the only time the Kardashians were called out for feet photoshop.

6. Kim and Kylie have six toes 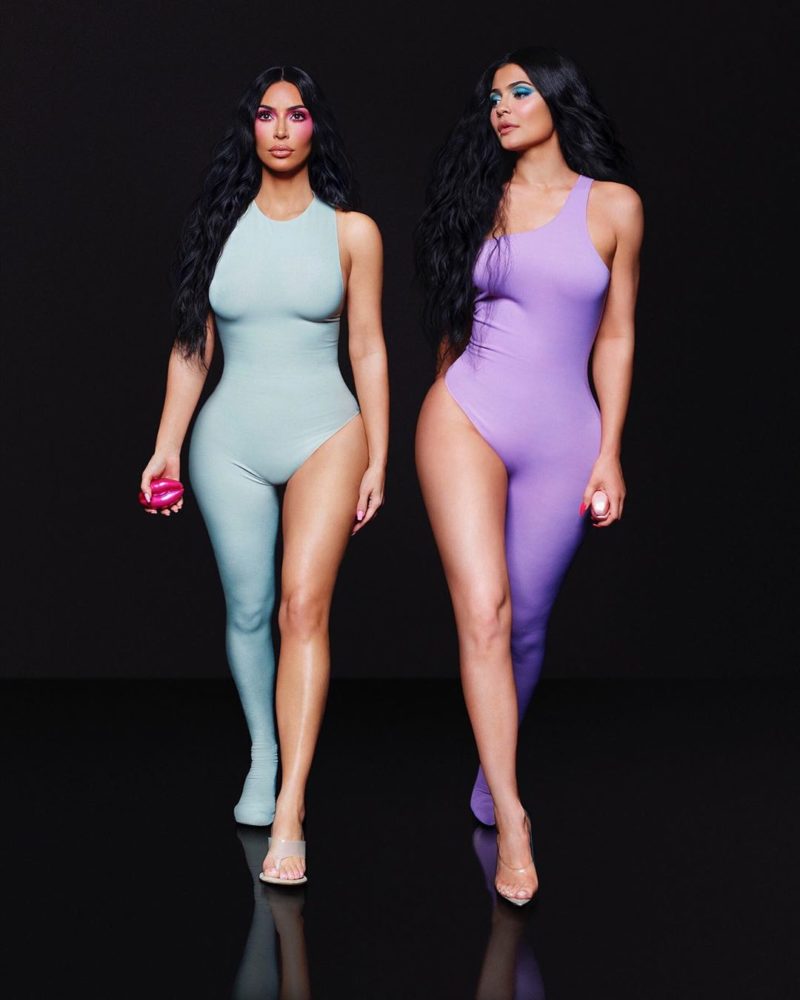 This photo was taken as a promotional image for their perfume collab. Everything looks ordinary and fabulous until you look down at their feet, where they’re each wearing open-toed sandals. 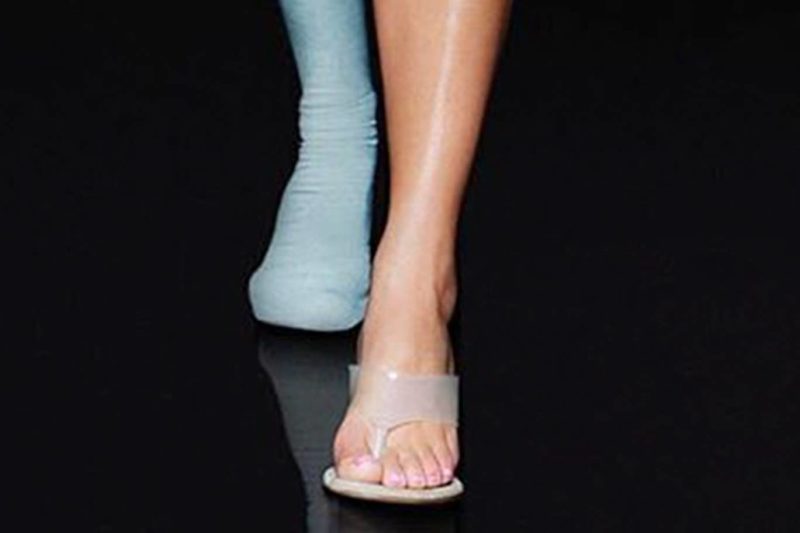 Fans counted six toes on each of them. Kim and Kylie never addressed the claims that they photoshop their feet.

Here they are together in Kim’s walk-in closet, with everything looking normal and bootylicious. But if you look to the left, you can see a very obvious distortion of both the door, the carpet, and the tiles on the ground. 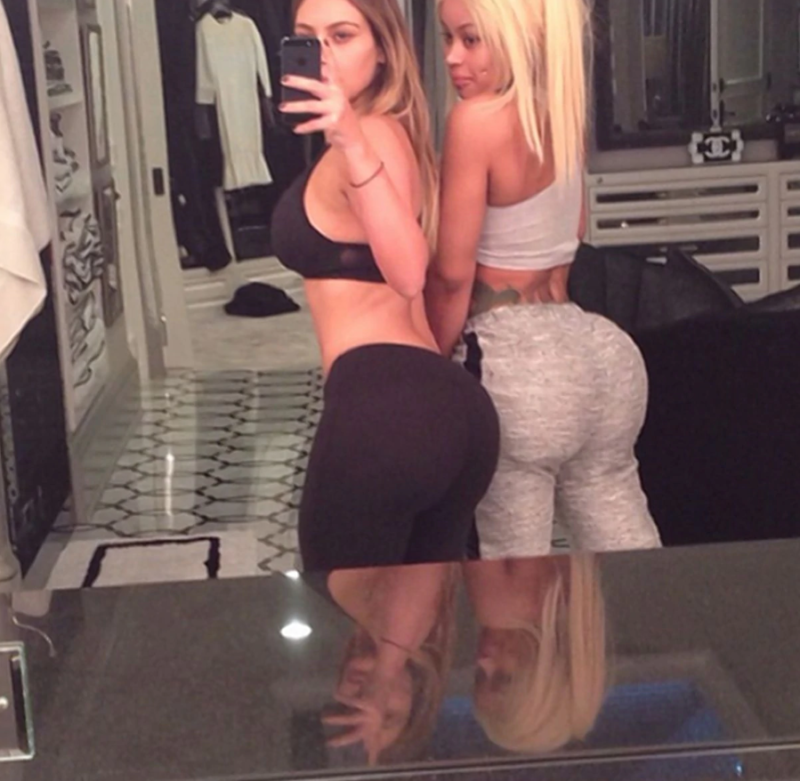 Either Kim’s walk-in closet defies the laws of physics, or there’s some serious photoshopping going on in this photo. Probably to make Kim’s waist look thinner.

The whole Kardashian clan have done huge brand deals with scam companies like flat tummy tea. A detox tea marketed to young women that are intended to reduce bloating and the size of your tummy. The photo posted by Kris Jenner, which meant to show the effects of flat tummy tea, was heavily edited, and fans were quick to notice. 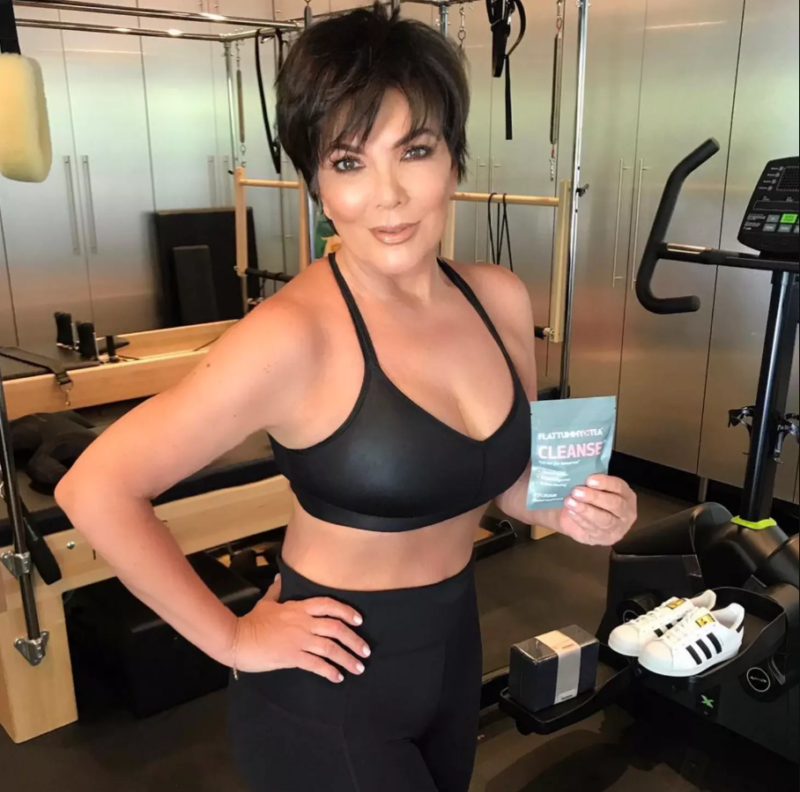 The counter in this photo is totally distorted because the pixels were moved around in order to make Kris’s arms look smaller. Her very flat tummy is also changed. There are blurred pixels next to it. 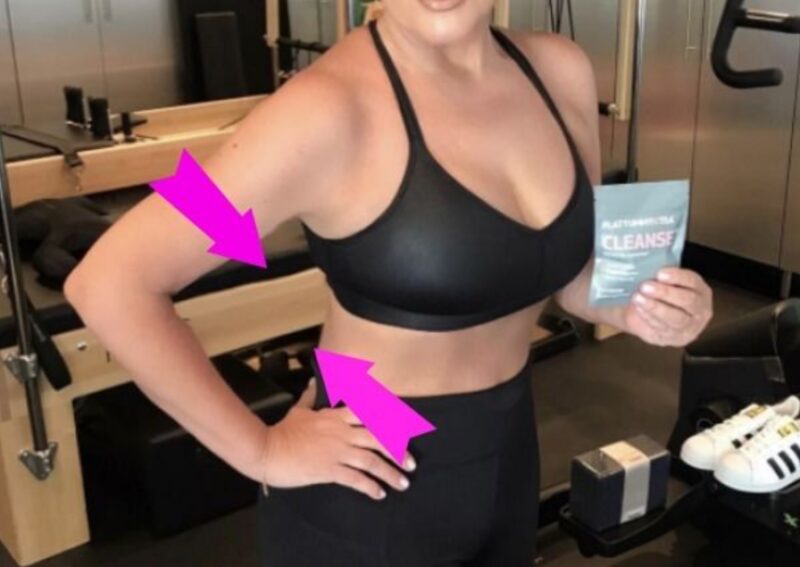 3. Kim’s March for our lives fail

The picture was posted with the intent to raise awareness for March for our lives. A protest to stop weapon violence. But instead of people talking about an important topic like that, all anyone could talk about was how bad the editing of this photo was. Kim looks great in the picture, but when you look at the rest of the photo, there’s a heck of a lot wrong with it – the sidewalk, car in the back, her scars. 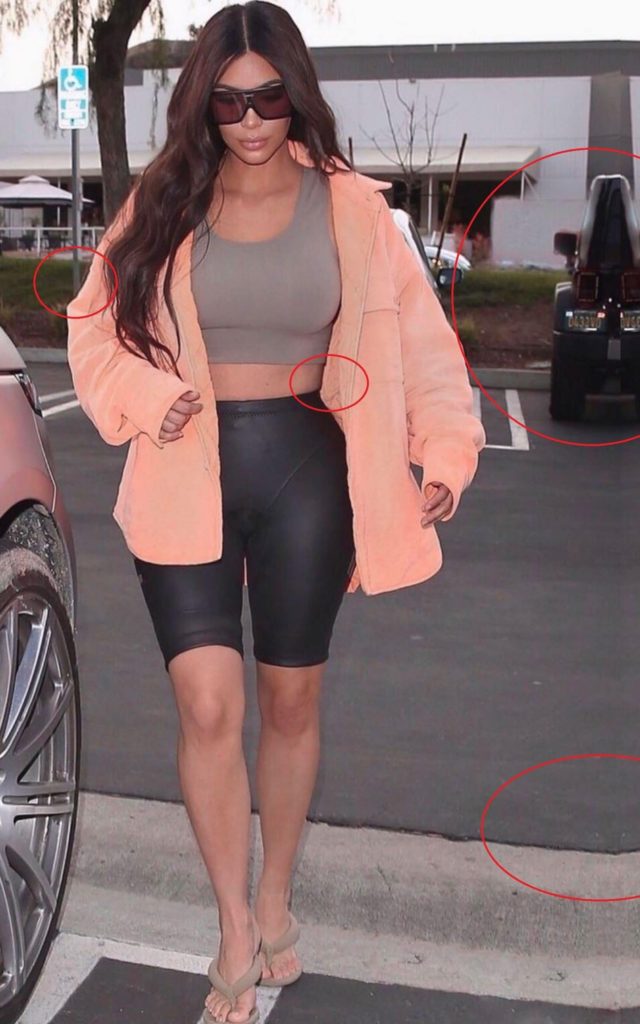 Here’s the original photo that was taken by paparazzi. Side by side, you can clearly see that Kim edited a scar on her right leg, and you can see the full jeep in the background of the original photo. Kim likely mirrored part of the picture so it would fit better in her Instagram feed. She was too tall to fit in an entire image. The photo is still up on Kim’s account, but the comments are still disabled. 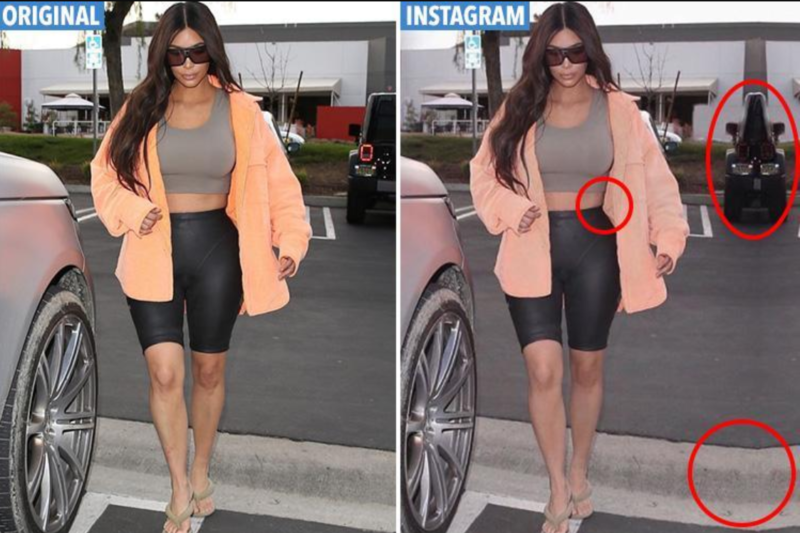 Kris Jenner once reposted a heavily edited picture, but an original unedited photo could be seen on Gordon Ramsay’s Instagram. Ramsay posted this photo with the caption, “Great seeing you tonight, Kris Jenner, can’t wait to read the cookbook”. 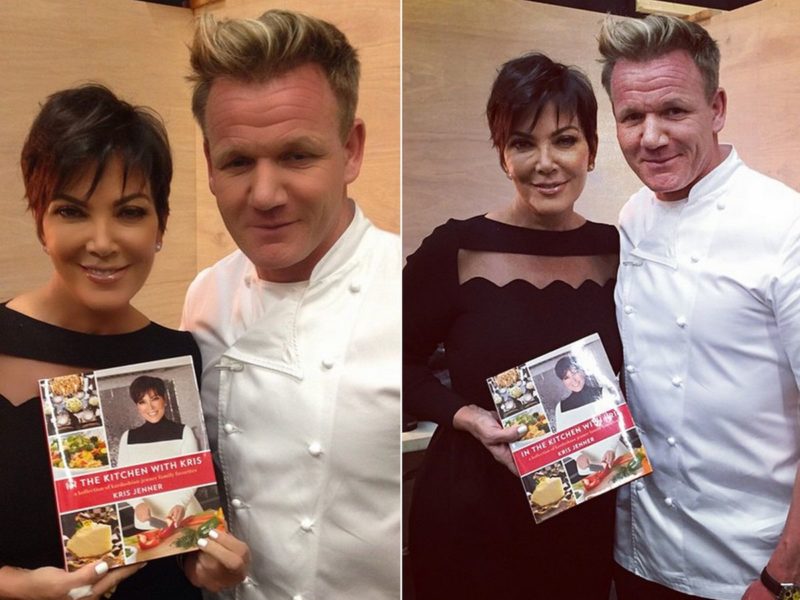 Kris then posted another photo taken at the same time, which was really poorly edited. You can see the difference when you look at the photos side by side. She even took the time to edit Gordon Ramsay’s wrinkles, but she didn’t pick the photo of him with his eyes fully open.

Kim Kardashian was once accused by fans of photoshopping her daughter North West to look thinner. She was five years old at the time. Back in 2019, one Instagram account posted a before-and-after pic of Kim with her kids. Here’s the photo Kim posted. It was taken by paparazzi during a Kardashian vacation in Bali. 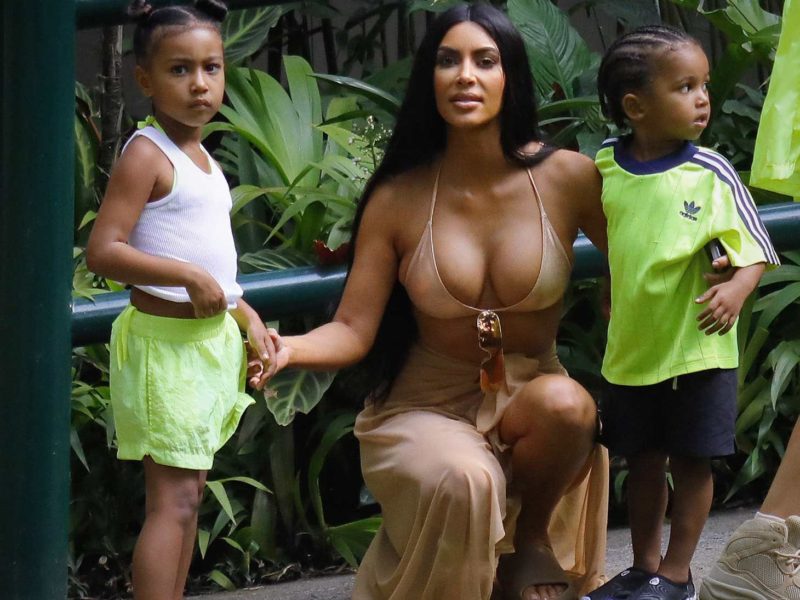 Now check out the original photo. You don’t see much of a difference, but north west’s tummy does look a lot flatter in the photo Kim posted. Social media users were angry with the fact they edited a child’s picture.

Kim shut down the claims that she photoshopped this picture, and instead, she said that she accidentally posted the edited photo without realizing it had been edited. She supposedly took it from a fan’s account.

Read Also: Catherine Zeta-Jones ‘Tears off’ Michael Douglas’s Leg in Photoshop and Returns It After Fans Noticed It

The Real Reason Why Khloe Kardashian is Seen With Her...

7 Things You Need To Know About Juicing Your Veggies