Every mother loves her child, and Kim Kardashian is no different. During a lunch session with her two-year-old son Psalm, she declared him the cutest boy ever. For all of you gourmets out there they were eating peas, carrots, shrimps, and noodles.

The day on Instagram started for Kim K with a photo of her lunch. She was in good company as her son Psalm was there accompanying her. They were having an outdoor eating session, that brought joy to the reality TV star. Psalm is the son of Kim Kardashian and famous rapper and her long-time husband Kanye West. Luckily for his mom, Psalm was wearing an orange bib which protected his clothes from getting dirty while he was going through peas, carrots, shrimps, and noodles. 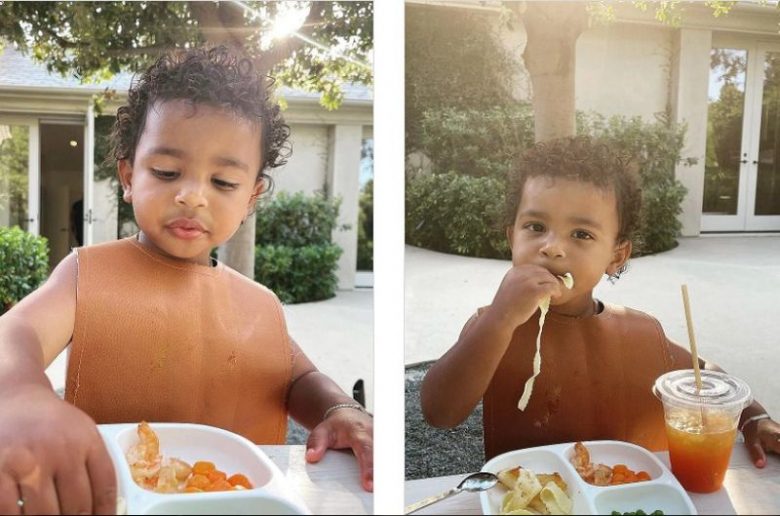 Kim was quick to snap the photo and share it on Instagram. Her caption was: “No one cuter.” She wasn’t the only one thinking the same as Kris Jenner commented: “No one!” Comments kept on piling as his aunt Khloe added: “He’s the best.” Nicki Minaj also entered the conversation by adding emojis that show classic emoji with hearts instead of eyes. In addition to Pslam Kim has another three children with Kanye and they’re North, and eight years old, Chicago, who is three years old, and Saint, the five-year-old.

After her split from Kanye, Kim often shares pic of her children. We can’t tell if this is due to divorce, or it’s just a coincidence. A few weeks ago she shared a pic from the gym where she was interrupted by both Psalm and Saint. It was an affordable picture that will be a fond memory down the line as both kids are seen kissing and hugging their mother. This post was captioned with: “Little visitors in the gym today.”

Their parents started going out in 2012 only to get married two years later. Their relationship started going sideways one year ago, and Kim shortly filed for divorce. They were married for six years, and we can say that they managed to build an empire together.

Psalm celebrated his second birthday in May, and this was yet another story his mother shared with her followers. This time she had a precious birthday wish: “My Taurus baby Psalm. He turns 2 today on Mother’s Day. Such a special day to share. He’s my child that looks most Armenian to me as my grandpa and reminds me so much of my dad. Psalm- you have brought such calmness and evenness into all of our lives! All of your cousins and siblings love you so much! You really are the joy of our crew! Mommy loves you SOOOOOO much!!!”

You can see how much little bot means to his mother, so it is no wonder he’s been dubbed as the cutest baby ever by his mother. We’re sure we’ll be seeing more and more pics of Kim’s children as it seems she’s on a hot streak when it comes to sharing photos of her babies.

Critics Love Dwayne Johnson: Jungle Cruise Could Be His Best Film Ever