Whoopi Goldberg has been making us laugh with her raw humor for the last four decades, but her sixth sense, when it comes to investing in real estate, is no laughing matter. Whoopi made some smart moves regarding buying and selling at the right time bloating her bank account even more.

A native of New York lives in New Jersey, believe it or not. When her business partner Tom Leonardis approached her with the idea to move to NJ, Whoopi said: “I gave him the stink eye”. Naturally, like every true Newyorker would. Still, after seeing a couple of properties, the actress settled in the quiet community of West Orange, New Jersey. 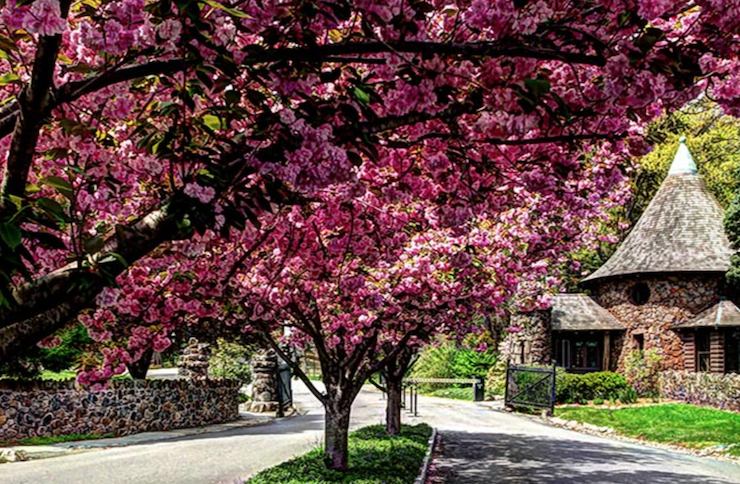 The gated community of Llewellyn Park is the perfect spot for a bit agoraphobic Whoopi. Not that the actress doesn’t like connecting with her fans, but some people should really learn some boundaries. In her book “Is it just me? Or is it nuts out there?” Goldberg talked about people sticking a pen and paper through the public bathroom stall for her to sign. Not pleasant when you’re just trying to do your business, to say the least.

Anyways, unexpectedly, New Jersey gave Whoopi the peace of mind that she was looking for and became her permanent home. The neighborhood of Llewellyn Park saw some famous residents in its day, like Thomas Edison, the inventor and a fierce competitor to Nikola Tesla. The secluded community gives privacy to its homeowners with guarded gates and a 24/7 surveillance system, as well as some breathtaking lushly landscaped lanes.

Goldberg’s home is a Georgian Colonial–style, mansion, built in 1927 by a wealthy mogul she identifies only as “the chicken king”. The comedian and a TV host of the widely popular “The View”, shelled out $2.8 million in 2009 for this little piece of heaven plot. The house itself is an 8-bedroom estate spread out on 9,486 square feet, to be precise. The hardcore, a long-time resident of  New York, who owned homes on the West coast as well but we’ll get to that in a bit, said she felt right at home in Jersey suburbs: “I felt I am supposed to be here. I just felt it had been built for me”.

Whoopie, being a multi-layered person herself, decorated her home to be complex as well. In every corner, there’s a bit of history, either her own family’s heritage or photos of events that forever changed modern society. The actress made a home out of a house by giving it a personal stamp and making it a reflection of her life path.

The City of Angels home

Before becoming a fixture in a quaint Jersey neighborhood, the comedian wondered the US, buying properties left and right, investing in an attempt to find seclusion. In 1993, Goldberg purchased a house in Los Angeles, for $2.5 million. The 7,000 sqft home had 6 bedrooms and 7 bathrooms. Originally, it was built for Vicky Baum, in 1933, hosting several prominent inhabitants like David Niven, an Academy Award Winner.

Regardless of holding it in her property portfolio, the actress never really lived in it. The house, located on 1461 Amalfi Drive, Pacific Palisades, CA 90272, turned up to be a financial burden. Goldberg spent most of her time on the East coast, so she sold it in 2018 for $8.8 million. A renovated edition was quickly back on the market but was pulled off since there were no interested parties. 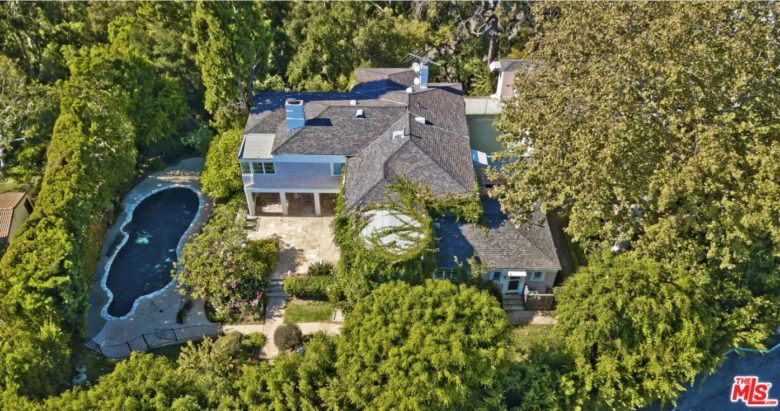 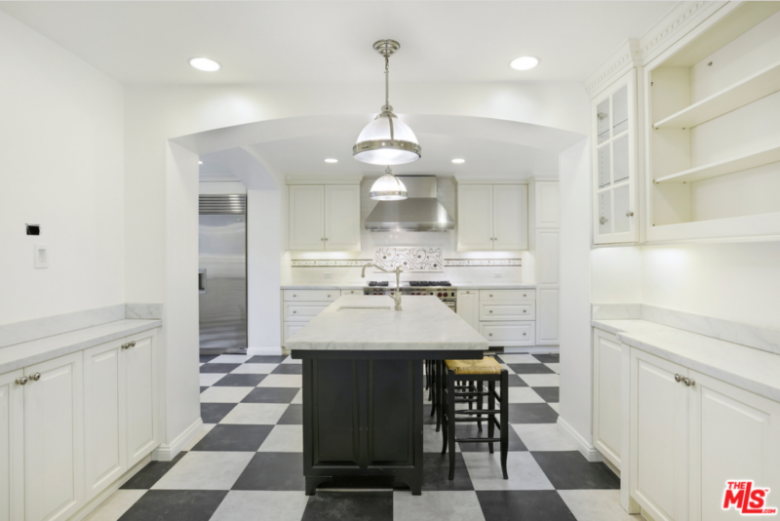 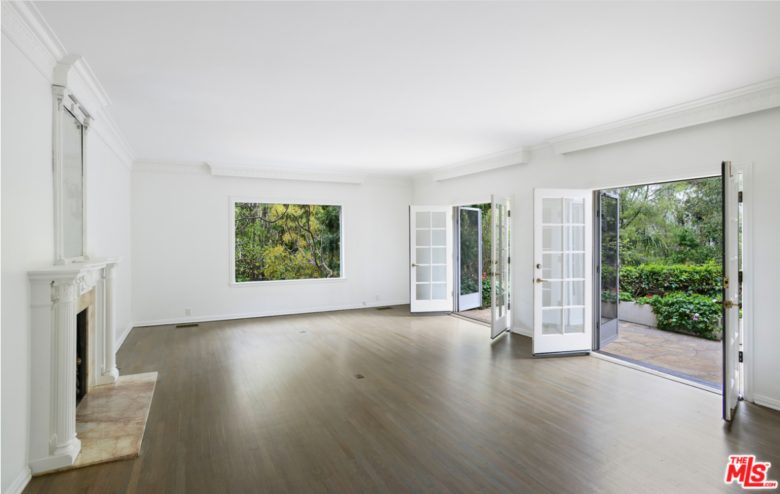 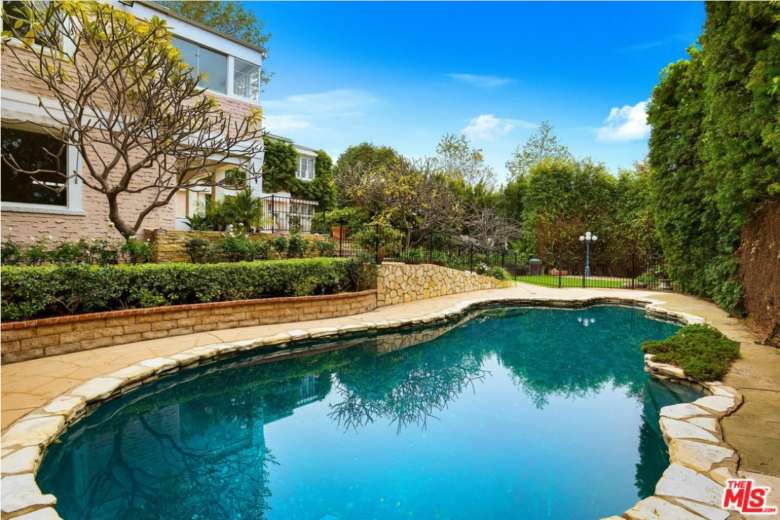 The house in Berkley, California was one of the early endeavors of Whoopi. She purchased the home in an unappealing Berkley for $335,000 in 1985, at the verge of her breakthrough. The property is made out of two units – one being the main quarters with 1,400 sqft, and the barn that was probably housing servants back in the year it was built in 1890. The actress turned it into modern real estate while still keeping that rustic charm. In the end, the property panned out as a great money maker. Whoopi sold it for $2.25 million in 2015. 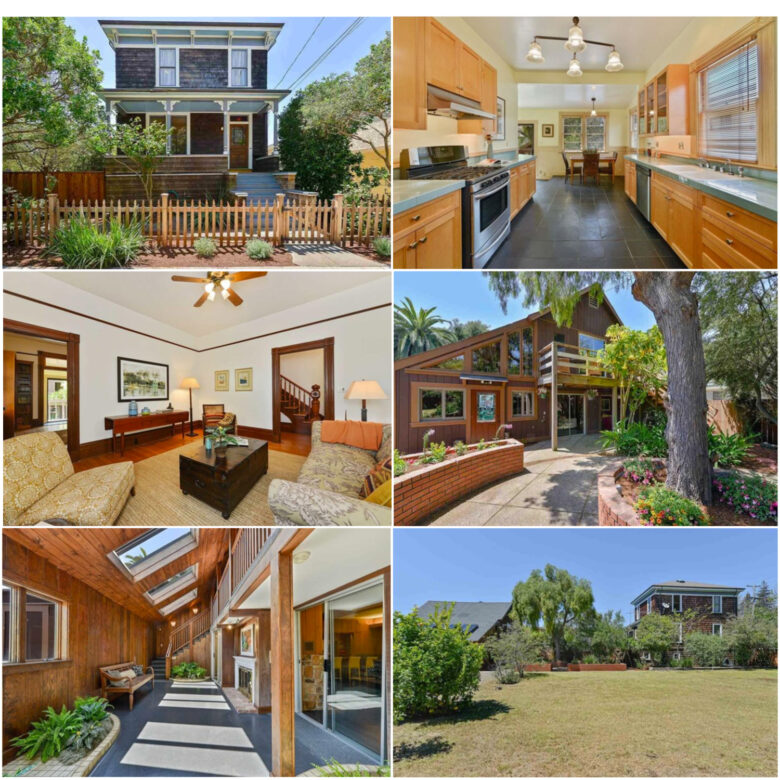 The Vermont property was a financial flop for Goldberg. In 2003 she purchased the lot for $960,000 and did partial remodeling in the house. However, this real estate’s real value lays in the land – 745 acres, that is. The house lingered on the market before finally going for $1.5 million in 2016, down from the $2.3 million asking price. 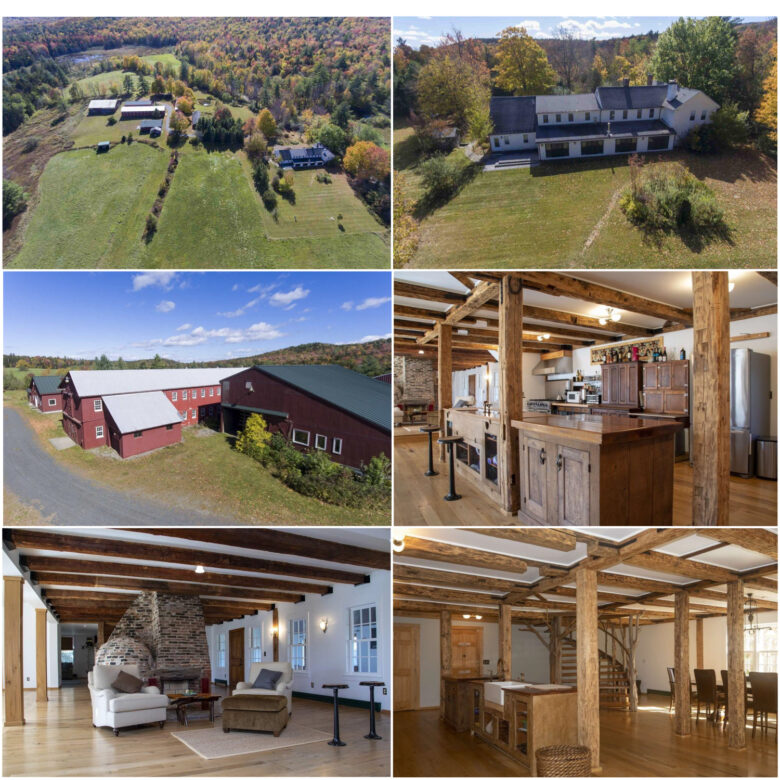 The New York loft Whoopi purchased in 2007 is in the posh neighborhood south of Houston St. Two bedrooms and three baths might not seem like a lot, but think of it in New York standards – that’s a mansion! Spreading across the whole floor, this place has everything. Vaulted ceilings, exposed brick walls, a bar, and a master suite. The kitchen is equipped with modern appliances, which is not exactly the selling point since the majority of Newyorkers eat out. Whoopi offloaded the place in 2010, and the condo has been changing hands several times ever since with some minor changes. 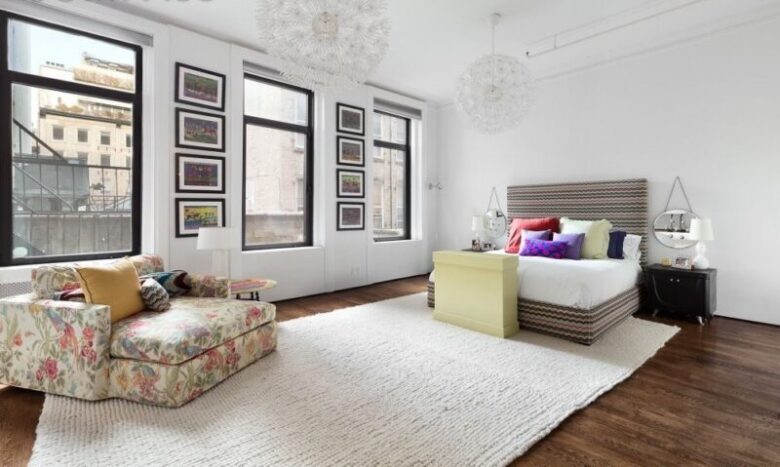 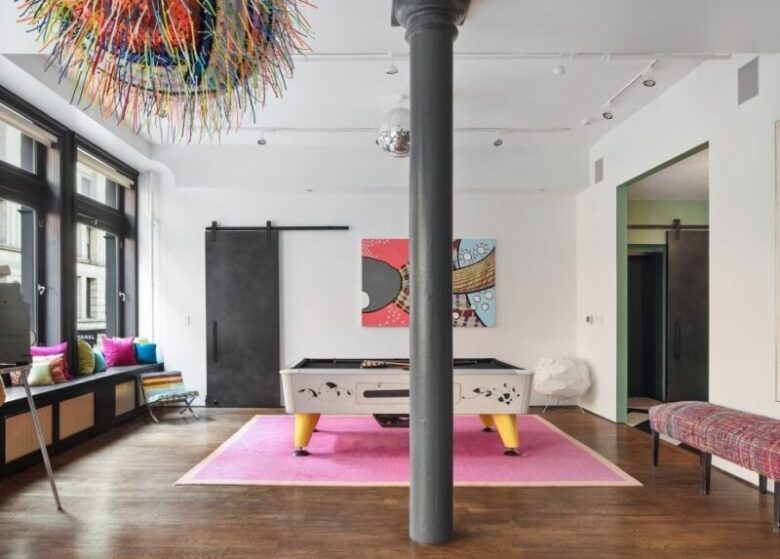 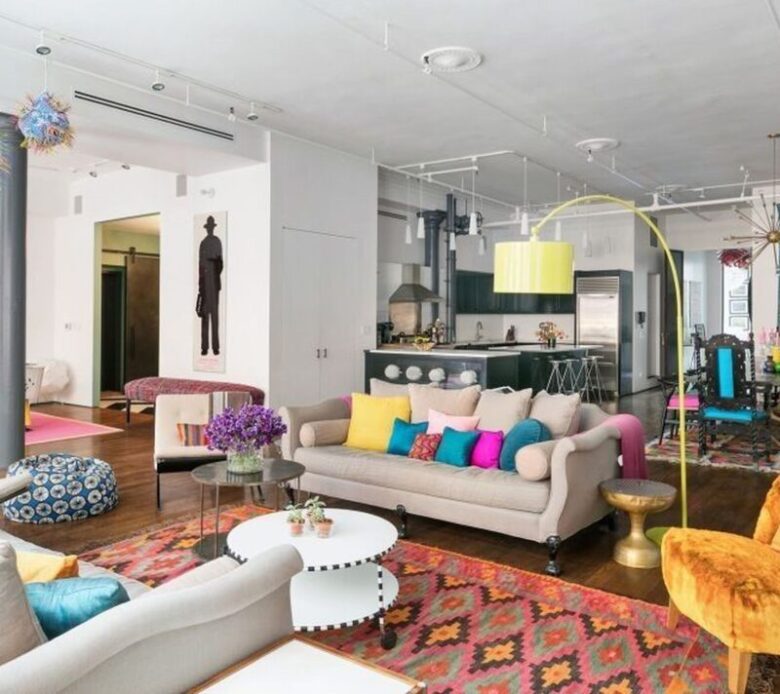 A wide smile and no-nonsense humor have been Whoopi Goldberg’s trademark for decades. Mostly she’s known for her roles in some legendary movies like “Ghost”, but the audience also loves her for expressing her views about social and political issues without tiptoeing around anyone’s attitude or comfort level. Whoopi’s genuine approach to ordinary people made her relatable and accessible instead of just being looked at as a Hollywood star.

Whoopi Goldberg is one of the rare celebrities who have won an Oscar, Grammy, Emmy, Tony, and Golden Globe. Impressive achievement from a once hopeful stand-up comedian. However, her childhood was filled with uncertainty and poverty. Her mom, Emma Johnson, being a single parent, did her best to get Whoopi and her younger brother on the right path. Life was hard and unpredictable. The roof over their heads was not taken for granted and every crumb of a normal life was greatly appreciated. Every day fight for a better life was the hand they were dealt until Whoopi decided to try and turn the wheel of fortune. 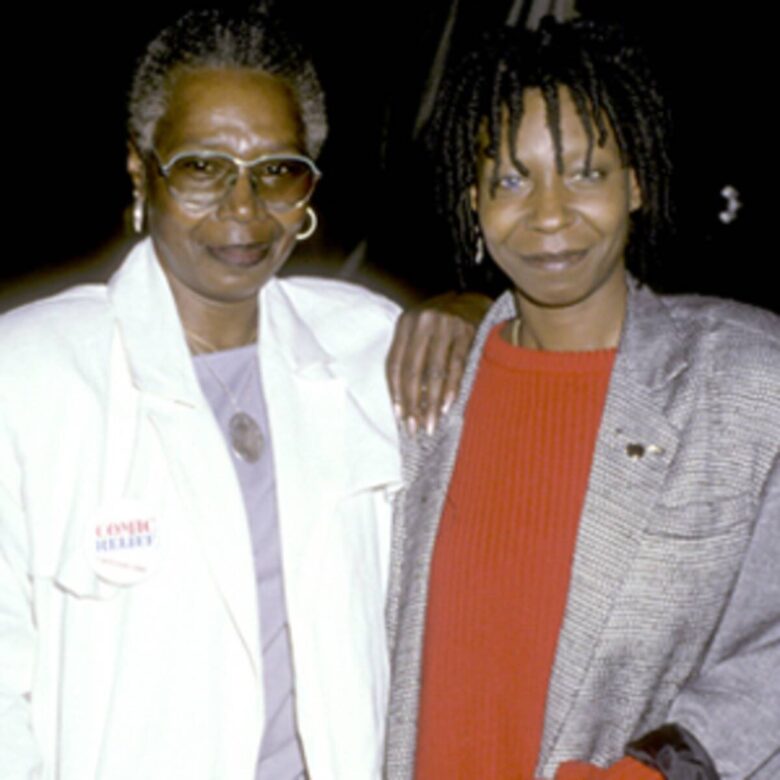 The origin of the stage name

Whoopi being Whoopi, she had to come up with a recognizable name. To be honest, when someone says “Whoopi” the majority of us would say “Goldberg”! No one can imagine calling her Caryn Elaine Johnson, which is her real name. 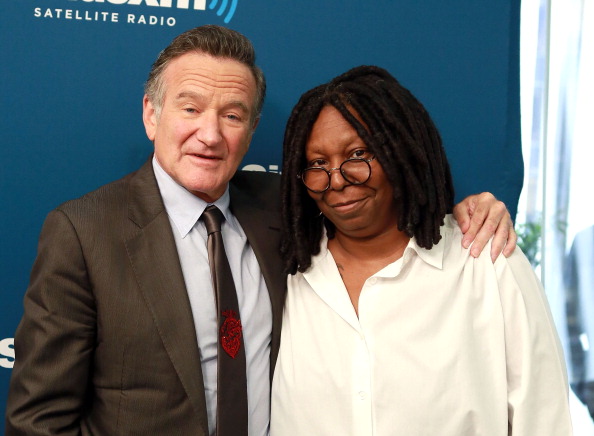 In the 70s, Goldberg moved with her daughter to California in pursuit of a better life and possibly a career in the show business. During the first few years that Whoopi worked odd jobs, including a funeral home assistant and a bank teller. During that time, her co-workers noticed that she passed gas frequently and they gave her the nickname, “Whoopi Cushion”. Her mother found that disgraceful and urged her to change it. Imagine being Whoopi Johnson. Weird and plain at the same time. So, witty Whoopi figured that she would be better accepted in Hollywood if she had a Jewish last name. She chose Goldberg since it was the most common surname. So, there you have it, as late Robin Williams, the great friend of Whoopi, used to announce her on the stage: “The Jewish black girl, Whoooooopay Goldberg!”.

As long as someone has fewer ex-husbands than awards, all’s good. Whoopi raked in three husbands throughout the years. Alvin Martin lasted from 1973 to 1979, David Claessen from 1986 to 1988, and Lyle Trachtenberg from 1994 to 1995. In 1973 Whoopi gave birth to a girl, Alexandra Martin. That is her only child from whom she has three grandchildren and a great-granddaughter. Her family always comes first, and Whoopi often hosts family cookouts that are famous for being grand since she enjoys having people over to her home instead of going out. 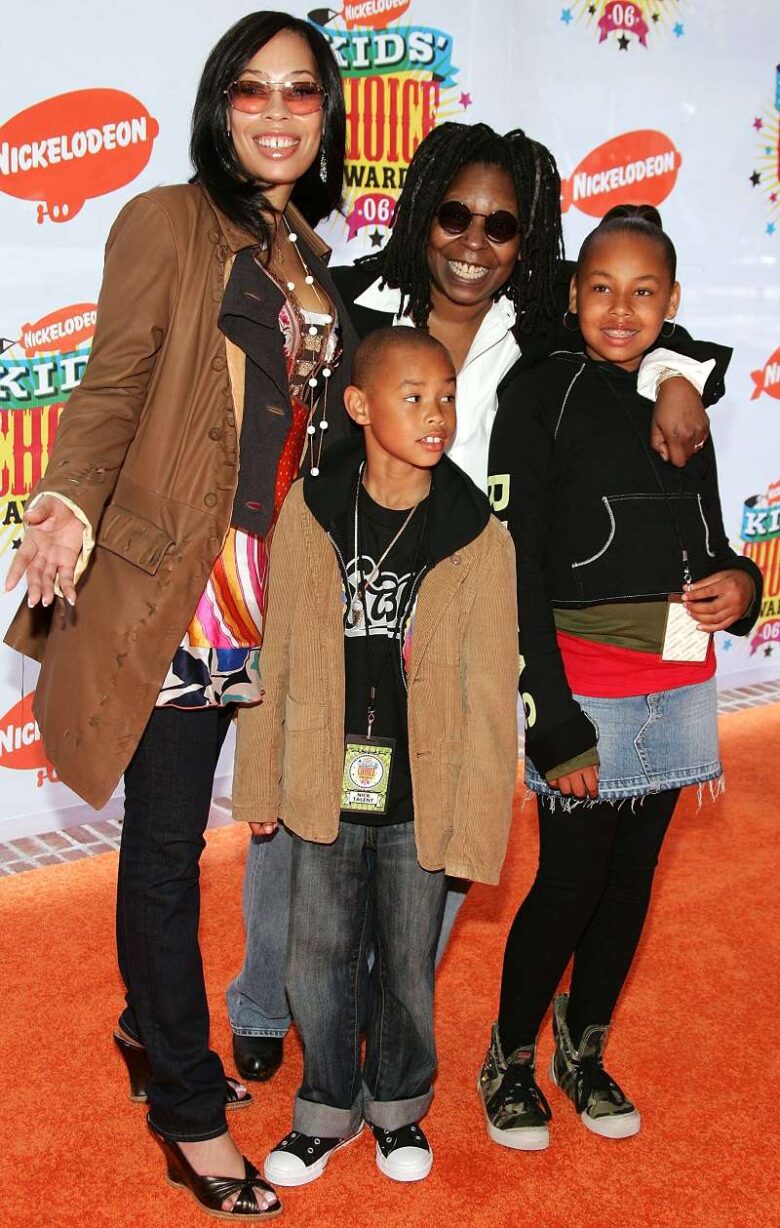 Her worth and her legacy can not be measured in banknotes. Still, if you prefer numbers, the official monetary worth is estimated at around $60 million. Aside from paying taxes, here’s where she spends her wealth on – charities! As of today, Whoopi supports 34 charity organizations, including UNICEF, Nelson Mandela Children’s Fund, AIDS LIFE, and Cancer Research Institute. She has a special soft spot for children coming from less-privileged backgrounds, thus funding many smaller foundations that are focused on education and human rights.