This is the second time in history we noticed that a human-made object has been near the stars. A few days ago NASA’s Voyager 2 probe has entered the heliosphere, which is a special creation of Sun that consists of the protective bubble of particles as well as magnetic fields.

NASA’s mission scientists found out that the probe went through the outer edge of the heliosphere on November 5th. At that moment hot solar wind crossed with the very cold, much denser interstellar medium. 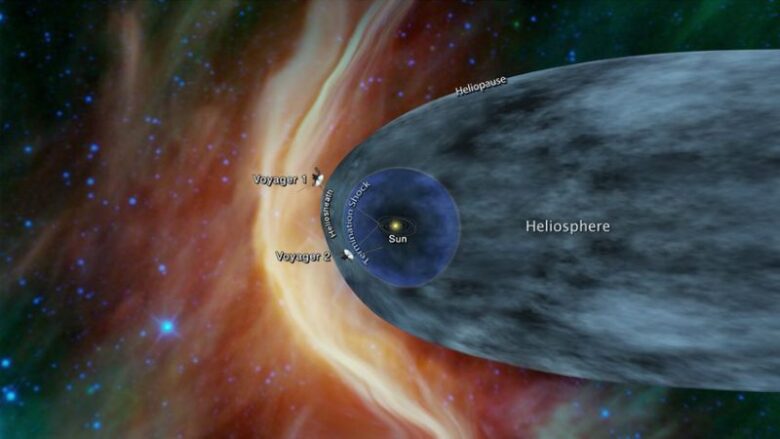 Voyager 2 has a twin known as Voyager 1, which has crossed the boundary in 2012. Voyager 2 consists of a special working instrument that should present an amazing view of the nature of this boundary into the interstellar space. It is already about more than 11 billion miles away from Earth.

There is still a decent communication between our mission operators and Voyager 2, but the information takes more than 16 hours to travel from space to our planet. That is a very long period of time considering that Sunlight takes only about eight minutes to reach the planet Earth.

The evidence of Voyager’s crossing came from the special onboard Plasma Science Experiment (PLS) that is placed within the Voyager 2. Until November 5th the space surrounding this object was filled mostly with plasma flowing out from the Sun. That solar wind creates a bubble known as the heliosphere which envelopes all the planets from our solar system. Since November 5th, a special plasma instrument has detected no solar wind flow from space around Voyager 2, which is how scientists know this object has left the heliosphere.

“Working on Voyager makes me feel like an explorer because everything we’re seeing is new. Even though Voyager 1 crossed the heliopause in 2012, it did so at a different place and a different time, and without the PLS data. So we’re still seeing things that no one has seen before, ” said John Richardson, who is a famous research scientist from the Massachusetts Institute of Technology situated in Cambridge.

Our scientists have evidence from three additional instruments: the magnetometer, the cosmic ray subsystem as well as the low energy charged particle instrument. That helped them confirm the fact that Voyager 2 has crossed the heliopause. They are now working on using the data from the instruments in order to get a clearer picture os the space surrounding the Voyager 2.

“There is still a lot to learn about the region of interstellar space immediately beyond the heliopause,” added Ed Stone, Voyager project scientist from California.

Voyager 1 and Voyager 2 together provide us with information about our heliosphere as well as interstellar wind. “Voyager has a very special place for us in our heliophysics fleet,” added Nicola Fox, who is a director of the Heliophysics Division at NASA Headquarters. “Our studies start at the Sun and extend out to everything the solar wind touches. To have the Voyagers sending back information about the edge of the Sun’s influence gives us an unprecedented glimpse of truly uncharted territory,” added Fox.