The Hollywood star made a joke about Tysons handshake: ‘Notice Mike accidentally almost breaking my hand in the second shot. His hands are like sledgehammers. Luckily I didn’t get mad!’.

Mike Tyson also posted one of the photos on his Instagram page with the rhythm of the Rocky theme song in caption. Both Stallone and Tyson fans rushed to comment and suggest a match between the big-screen and a real-life boxing legend. 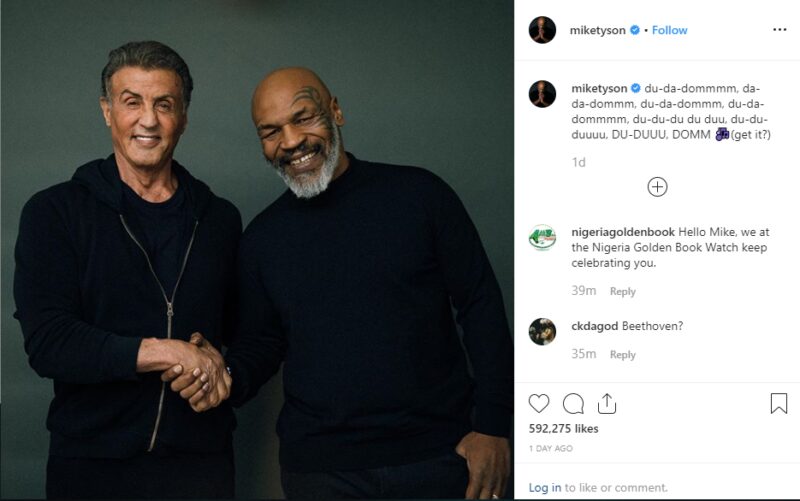 However, the occasion for the photo is not a clash between these two, but a new Stallone’s documentary.

The Hollywood actor and producer Sylvester Stallone invited Mike Tyson to be interviewed about the night when undefeated champion Anthony Joshua got dethroned by Andy Ruiz on June 1 at Madison Square Garden. ‘One Night: Joshua vs. Ruiz’ will be the first documentary in Sylvester Stallone’s Balboa Productions and DAZN new feature documentary series called ‘One night’.

The great @MikeTyson being interviewed for the upcoming special documentary about the battle between the Mexican #Rocky, @andy_destroyer13 and the undefeated champion @anthonyjoshua! Soon to be seen on the @dazn_usa NETWORK. Notice Mike accidentally almost breaking my hand in the second shot. His hands are like sledgehammers. Lucky I didn’t get mad! #balboaproductions

487.1k Likes, 2,043 Comments – Sly Stallone (@officialslystallone) on Instagram: “The great @MikeTyson being interviewed for the upcoming special documentary about the battle…”

The film will premiere November 20, three weeks before the anticipated rematch between Joshua and Ruiz in Saudi Arabia on December 7.