Home Movies The Latest Review of the Popular UglyDolls
Movies

The Latest Review of the Popular UglyDolls

UglyDolls, animated, musical, magical story, is telling us how to embrace everything that we are, and that the ugly is the new beautiful. When we embrace ugly in us we are becoming truly happy in life.

In this amazing animated movie, toys are tossed off the factory because they are ugly for some reason, and has a unique flaw. Those flaws cannot please the corporate standards, and can not be sold in stores.

Moxy, voiced by talented Kelly Clarkson, is a pinky toy with ugly teeth (they have a huge gap, and Ox, voiced by Blake Shelton, green toy with ugly X where his left eye should be. In this animated movie, we will also meet Ugly Dog, voiced by musician Pitbull, a cyclops, ugly, mascot, with the peeper at the forehead, and Wage, voiced by Wanda Sykes, ugly toy with the vampire`s teeth.

The film is based on the line of plush toys which was launched in 2001, and the characters are so individual and unique in their ugliness. The specific characters live in Uglyville, and all dolls accept their outcast fate.

One of the main characters, Moxy, cannot accept this fate, she wants to go to the Big World and become a playtoy for a child. This is her dream and that what fulfills her life. We already saw this in Toy Story when we mett Woody. 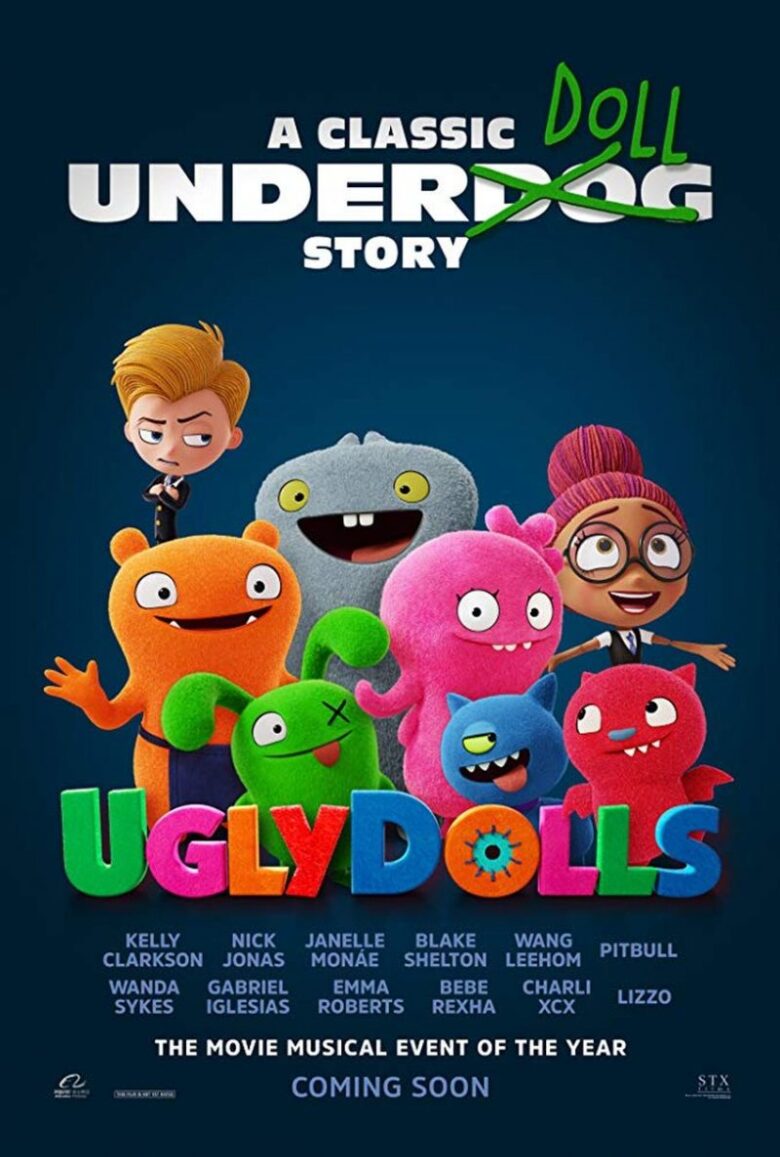 Some of the fans said that UglyDolls are a mix of the Toy Story, Trolls and The Smurfs.
UglyDolls many of the fans compare with The Trolls because the movie is full of singing, dancing, everything is in rainbow colors, and the movie has an amazing singing duo, Kelly Clarkson and Nick Jonas. Someone said that Prince Gristle and Bridget from Trolls are sophisticated versions of the Ugly Dolls, voiced by Christopher Mintz-Plasse and Zooey Deschanel. In the years that follow maybe, we will watch UglyDolls Lite. 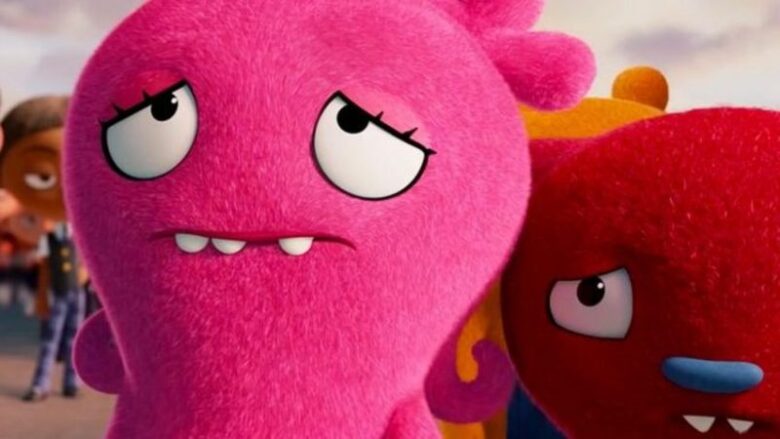 At the end of the comparison, this is a great animated film for children, and they will enjoy watching every second of it. It is much better than the Missing Link because a small child can easily identify with characters from the Ugly Dolls.

The film is produced by STX`s Family division and directed by Kelly Asbury, the same person who directed Gnomeo & Juliet and Smurfs: The Lost Village. You can not compare this film with Pixar`s films, but it will work for little kids.

The plot goes like this: five Ugly Dolls go through a portal, in hope that they are going into the Big World, but there is a catch, they went to the Institute of Perfection, an academy for the most beautiful and the perfect tailored dolls.

The ruler of that Institute is Lou. Voiced by Nick Jonas, who is a pop star, dictator, and all above an icon for the perfect beauty. His main feature is his beautiful hair, in honey- gold color. 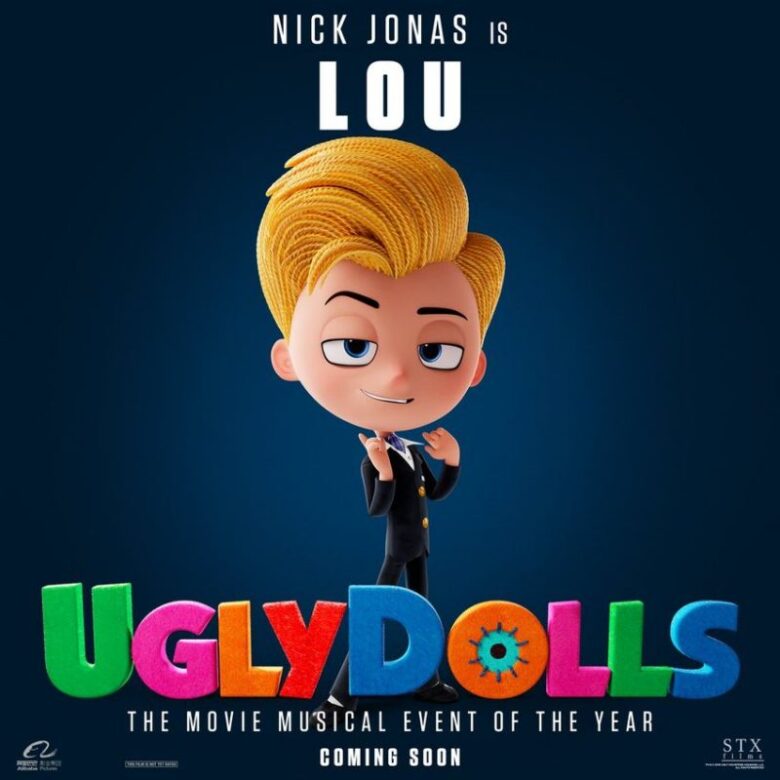 In this Institute the main rule is uniform, everyone has to wear it, from school girls to unique female dolls. The makers of the movie place conformity against the gentle soul in the center of the ongoings. Kelly Clarkson and Nick Jonas made a fantastic job and their vocal performances are stunning. Pitbull and his part is a cherry on the top. We also meet Mandy in the film, the girl from the Institute who need glasses but she is trying so hard to hide her flaw.

The message of this animated film for children is beautiful; Just be yourself in this crazy world, and everybody will love you. The film wants to show little kids that ugly can be beautiful and that too much beauty can end up very ugly. When it comes to the relationship between two people, the movie gave a message that they should meet in the middle and that everyone has a right to feel beautiful and good about it. 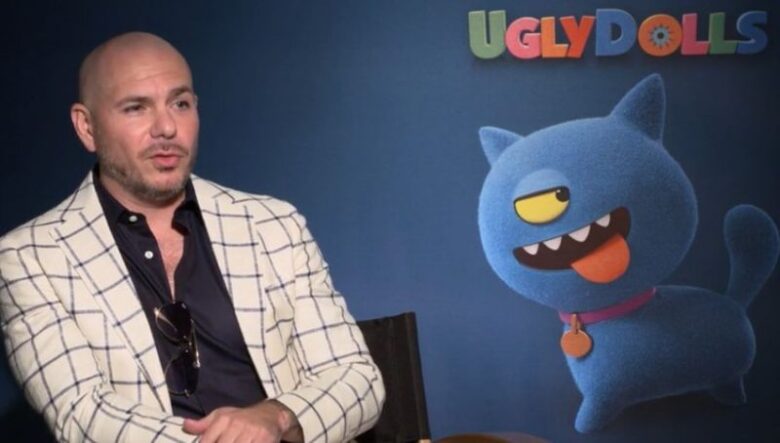 Kelly Clarkson’s Ex Won’t Be Riding Any More On MT...

Facebook`s Cryptocurrency – What Can We Expect?