CNN – 02/12/2020: Donald Trump already started his campaign for the November elections. The way things stand now, his two children, Donald Trump Jr and Ivanka Trump, will be prominent members of the ongoing campaign. POTUS decided to call them to stand during his Manchester, New Hampshire rally, for public praise. Trumps are in this together, as you will see.

Trump talked about both of them on a high note, saying that his daughter Ivanka is a powerful, smart woman, not known by many and that she’s gorgeous. President also added that he’s not allowed to call her beautiful because she is his daughter. 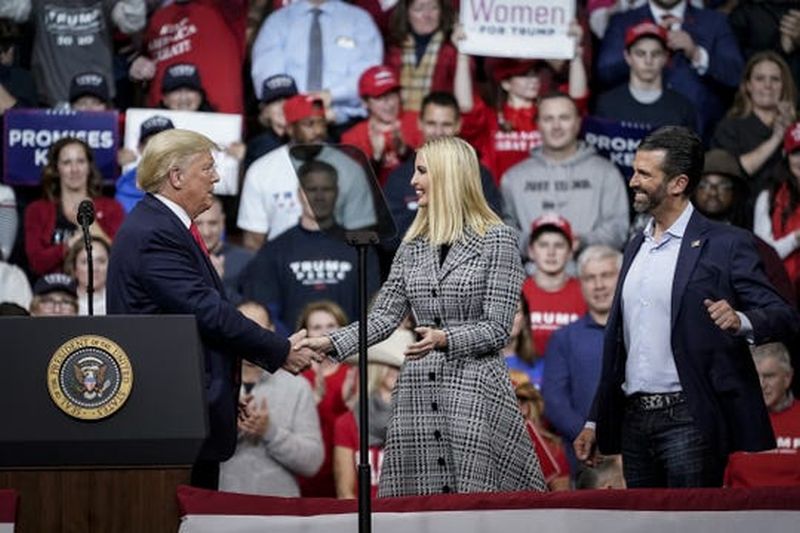 After introducing Ivanka, Donald called his son Don Jr, stating that he’s done an excellent job warming up the crowd with his speech before President took the stand. While Trump Jr was joining his father on the stage, Trump supporters started chanting ’46.’ This chant was a clear indication that they are prepared for Trump Jr to succeed his father.

This notion is not far away from happening. Donald Trump is in pole position to win the upcoming elections. This win would give him a spot in the office until 2024. The US Presidents are limited to two terms in the office, so after 2024, Donald would need a successor. We are sure he the same as his supporters would love to see Donald Trump Jr in the office.

He’s been by his father from the 2016 campaign. Trump Jr will be there in the next four years. This period is enough time for him to be groomed for the Presidency. If you believe that this is unlikely, think again. A reality star businessman, playboy, and billionaire became President a few years ago. I think you get the point.

This idea, of Trump dynasty, is deeply embodied in all Trump supporters, and to people close to him even more. Brad Parscale, Trump 2020 campaign mange already stated: “The Trumps will be a dynasty that lasts for decades.”

Queen Elizabeth wants Prince Harry and Meghan Markle back in...