EXPRESS – 04/05/2020: The First Lady Melania Trump and her husband, President Donald Trump, visited Great Britain twice last year. They were there more than once to meet with various officials and members of the Royal family. According to one expert, Melania wanted to look Royal herself, or at least to stand out among the Royals.

The wife of the 45th US President is 49 years old, and this was her first time visiting the UK in an official role. During 2019 the presidential couple visited the UK twice to meet with members of the Royal family. Upon their visit, Melania Trump used a little trick tp stood out when she met Queen Elizabeth. 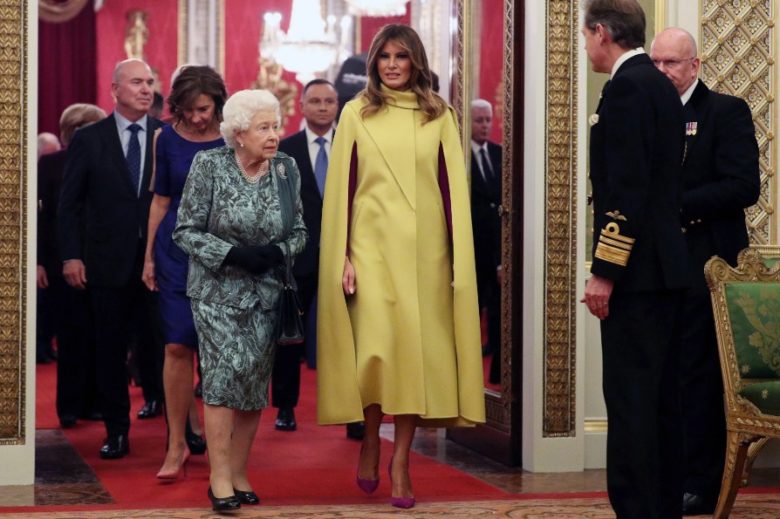 The June visit was three days long, and Donald and Melania were there on state business. Both of the attended the state banquet hosted by the Queen and other members of the Royal family. The First Lady tried to look glamorous during her stay in the UK and upon occasions when she shared the stage with the Royals.

There was a trend present in Melania’s outfits. Gianni Casagrande, who works for shoe brand Moda in Pelle spoke about this to express.co.uk: “As the old phrase goes, the clothes maketh the man, but when it comes to Melania Trump, America’s First Lady, she is certainly sending a strong message of who she is via her sartorial choices – particularly when she meets or socializes with the Queen.”

Melania was quite aware of the company she will be in and responded adequately with her choices of dresses, shoes, and other accessories: “Melania has come under criticism for elements of her pre-Trump lifestyle, including a glamour model career and a reputation for favoring revealing outfits. However, with pieces like the Mary Poppins inspired white Dolce & Gabbana dress with a navy belt she wore during last June’s state visit, she is showing an elegant side – while still showing off her figure.”

Gianni Casagrande even suggested that there are many similarities between the Queen and the First Lady: “Like the Queen, Melania is a fan of bold colors and tailoring, and isn’t afraid to stand out and wear something eye-catching.”

Is Donald Trump Trying to Make The Best out Of Coronavirus Crisis?