Is This Young NFL Quarterback a Donald Trump Supporter?

SI – 04/19/2020: A lot of strange things happen these days. But, Baltimore Ravens Quarterback Lamar Jackson certainly didn’t expect that his tweet would attract the attention of the world’s most powerful man. A quote tweet that Jackson tweeted was then commented by no other than President Donald Trump.

We can hardly remember when a stranger interaction occurred before. The video shows the reaction of Jaire Alexander to Lamar Jackson, getting drafted by Baltimore Ravens. POTUS decided to be a part of their moment and wrote: “Really nice to see this and, what a great pick!” 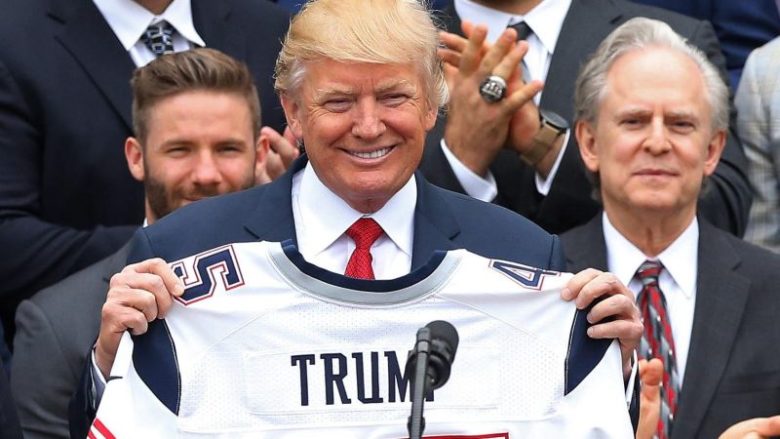 All of this wouldn’t be too strange if it were about the upcoming draft. But, we are talking about the 32nd selection of the 2018 draft. Jackson has set the NFL on fire since then, posting a 19-3 record as a starter. Besides, he now holds a record for most rushing yards in a season by a quarterback with 1,206.

Ravens QB responded to Donald Trump by writing: “Truzz Trump.” This is a slang for trust, which could point out that Jackson trusts President Trump and his administration. The young QB has this word tattooed across his chest, so it definitely has a deep meaning to him. It could be a sign that Jackson sides with Trump’s politics.

Lamar went as far as to trademark this phrase together with “Era 8 by Lamar Jackson,” and “The Lamar Jackson Experience.” In one of his interviews, Jackson also explained that Truzz could also mean thank you when someone is kind to you as Mr. Trump was, so it could mean nothing politically.

This phrase became a Baltimore Ravens mantra during the 2019 season as both players and fans started using it after Lamar Jackson. The term that became widespread among The Flock was “Big Truzz.”

The conversation between Trump and Jackson was hijacked by Carolina Panthers wide receiver Robby Anderson who wrote: “Tell em Free Yak.” The former Jets WR was alluding to President Trump that he should pardon rapper Kodak Black, who was sentenced to 46 months in prison.

Valerie Cossette’s Cat Helps Her With a Workout

Carmella Rose Wears Nothing But Paint in New Photos