EXPRESS – 04/12/2020: If you believe in conspiracy theories, there’s one that claims coronavirus pandemic was predicted back in 2008. It was allegedly foreseen by a psychic named Sylvia Browne.

COVID-19 first appeared in Chinese province Hubei, in the city Wuhan. It all started back in November of 2019, and no one could predict that the entire world will suffer from it. At the moment, its presence is felt in every corner of the globe. Almost 1.5 million people are infected, and the number keeps growing. 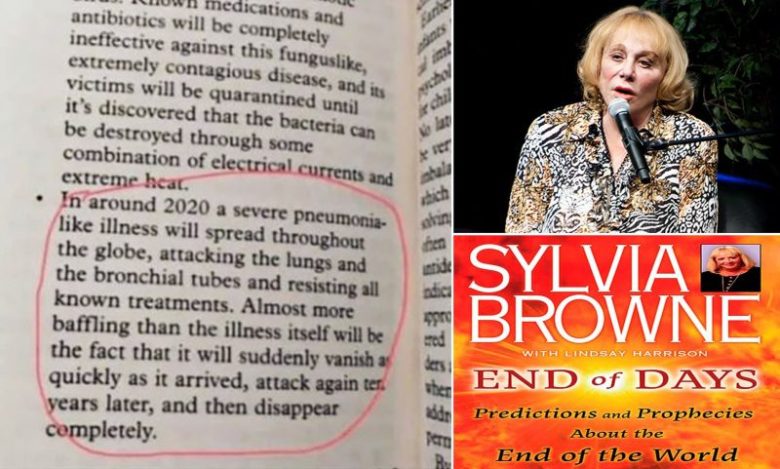 Development as this gave birth to numerous conspiracy theories. People have different ideas about wherefrom did the virus come and why. Some claim that Nostradamus knew about it back in the 16th century. Others believe that Bible had information about it if you look at the last book of the Bible, the Book of Revelation.

But, we are here to talk about what a psychic Sylvia Browne wrote in her book back in 2008. Ms. Browne wrote a book titled End of Days: Predictions and Prophecies about the End of the World, where she claimed that pneumonia pandemic would hit the world in the future.

Now, coronavirus is not pneumonia but can cause it and is deadly to people who already have pneumonia or breathing issues. Ms. Browne died in 2013, and here’s what she had to say about the future: “In around 2022 a severe pneumonia-like illness will spread throughout the globe, attacking the lungs and the bronchial tubes and resisting all known treatments.”

This is not straight on point, but it’s not far from it. This psychic has good news if you trust her writings: “Almost more baffling than the illness itself will be the fact that it will suddenly vanish as quickly as it has arrived, attack again ten years later, and then disappear completely.”

So, what do you say about this prediction? Do you believe in conspiracy theories as these?

Harvey Weinstein Accused of Another Assault