Prince Harry and Megan Markle began their three-day visit to New York and the World Trade Center, and this is their first official appearance since leaving the royal family and moving to California in 2022.

Prince Harry and Megan Markle are in New York, and their visit began with a tour of the city from a height – from the observatory on the World Trade Center building.

The couple should participate in the “Global Citizen Live” concert in New York’s Central Park on Saturday, organized to promote equal access to the vaccine against covid for everyone.

Saturday’s concert, which will feature Coldplay, Jennifer Lopez, and Lizo, among other performers, will be part of a 24-hour broadcast from cities around the world “for saving the planet and fighting poverty.”

The Royal couple’s visit to the WTO is the first public appearance since the birth of their second child in June, daughter Lilibet. 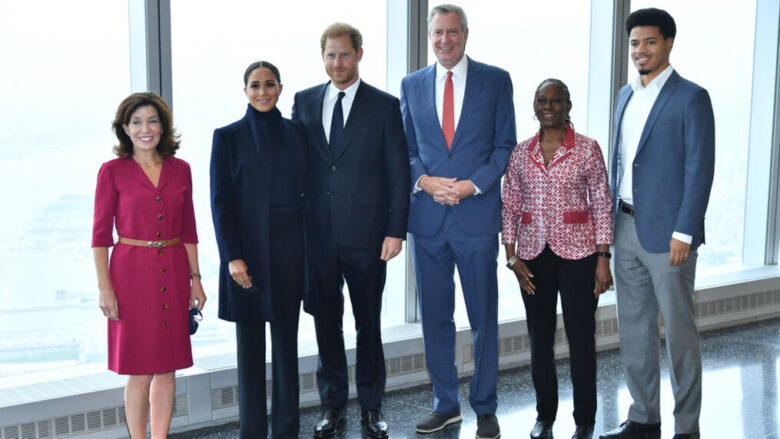 The Duke and Duchess of Sussex were accompanied by the Governor of the American federal state of New York, Kathy Hochul, the Mayor of New York, Bill de Blasio, his wife Chirlane McCray, and their son Dante de Blasio.

Mayor Blasio praised the meeting on social media and stressed that Megan and Harry paid tribute to the victims of 9/11 with their arrival.

The tragedy of September 11 touched the entire world, and it’s still felt today. We’re honored to join Prince Harry and Meghan, the Duke and Duchess of Sussex, at One World Observatory. https://t.co/bs7j2AVJsO

They paid their respects to the victims at a nearby 9/11 memorial and stopped by a nearby museum.

Dressed in black, they expressed their condolences to the victims who died in the terrorist attack on the Twin Towers on September 11, 2001, as well as to their families and friends who lost their loved ones. 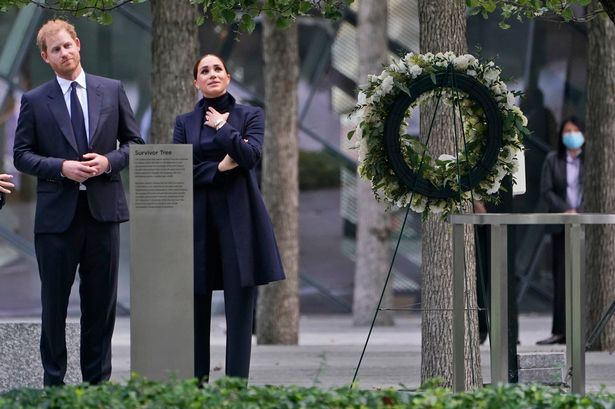 Megan wore elegant long pants and a long coat that matched with high heels, along with feminine pearl earrings and a gold watch. Her makeup was discreet, and she tied her hair in a low ponytail. Everything looked very effective, powerful and chic, according to the comments of fashion experts.

Harry wore a black suit, white shirt and tie, as befits an event like this.

As usual, Megan and the prince held hands all the time, and Harry waved to the fans who called him by name.

The couple abdicated their Royal duties in early 2022 and now live in California. Harry went to the UK several times, but Meghan has never visited the Royal family after leaving the UK.

Since the travel ban imposed by former President Donald Trump should be lifted in the United States after 18 months, Megan and Harry are planning their visit to England and Queen Elizabeth.

That trip, unlike this one, would be a private family visit since Queen Elizabeth has not yet met her great-granddaughter Lilibet, and she rarely sees her grandson Harry.

It is rumored that Megan and Harry should baptize their daughter Lilibet in England, as well as her older brother Archie, but it seems that Megan will not allow it.