President Donald Trump Calls For the Arrest of Nancy Pelosi

POLITIC FLARE – 02/07/2020: Donald Trump didn’t have a good relationship with Nancy Pelosi, to begin with. Now, after the House Speaker ripped Donald Trump’s State of the Union speech in front of the entire Senate, it’s taken a turn for the worse. After he was acquitted, Mr. President stated that what Pelosi did was terrible, very disrespectful, and above all, illegal.

After Donald Trump was acquitted, he was asked what measures will he take to unify the country. POTUS stated that the unification would be achieved through success, which he brings on the table. The failed attempt of impeachment is now behind Trump, and he looks forward to future achievements and November elections. 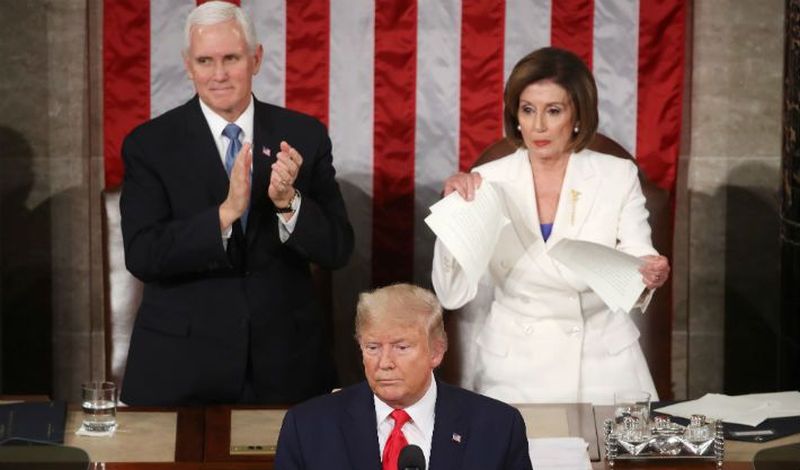 The reason why Donald Trump called what Pelosi did an illegal act is that she might be prosecuted for ripping an official government document. This only remains a theory, as there is a chance it will be done, but it’s on a short rope. You are not allowed to shred government documents if your intentions are corrupt. Another reason why it will be hard to accuse Pelosi is that she ripped the copy of the document and not the original.

After all, Donald Trump is known for ripping official documents. There’s a team of people in the White House who are tasked with putting back together documents that Trump tears apart.

Trump on Pelosi ripping up his SOTU speech: "It's illegal what she did. She broke the law." (Ripping paper, believe it or not, is not illegal.) pic.twitter.com/yLElQfWsQO

Trump received a backslash from on Twitter after his comments started spreading on the Internet. For someone who was just acquitted for crimes he did commit, but it was deemed that it’s not enough to end his presidency shouldn’t talk about legal or illegal things. Internet users commented that for Trump, it’s illegal to rip a couple of papers, but it’s not to bribe an official of a foreign country. Double standards, but we are used to it by now, especially regarding Trump and his stance on Democrats.

Rita Ora Wears a Torn See-Through Sweater in a Library