At the moment, Miami Dolphins have two quarterbacks on their roster fighting for a starting job. They are Ryan Fitzpatrick and Josh Rosen. Neither of them managed to cement their place as the leader of the Dolphins squad. Fitzpatrick is by no means long term solution. Rosen, on the other hand, failed to show his talents in the NFL so far. Any way you put it, Dolphins are on the market for a QB.

Dolphins are having a terrible season, and they will have a chance to pick from one of the first three places in the 2020 draft. During the season, experts claimed that Miami franchise is aiming to pick Tua Tagavailoa of Alabama. Other prospects on Miami’s radar include Oregon’s Justin Herbert or Utah State’s Jordan Love. Despite deep draft at the QB position, we believe that Dolphins shouldn’t pick a QB in 2020. 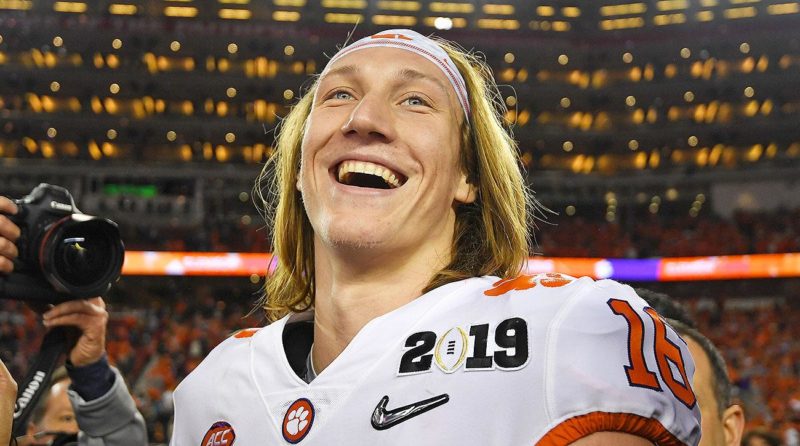 2020 QB class is good, but if Dolphins want to bring back good old days, they should skip QB’s next year at the draft. At the moment their O-line is no good, and any of the quarterbacks mentioned above would be put in a bad situation.

Instead of picking a QB Dolphins should look to build their offensive line by drafting Iowa’s Tristan Wirfs or Georgia’s Andrew Thomas. Both players are regarded as franchise cornerstones at their respective position.

After taking O-lineman in the first round, they should improve their run game. This could be done through drafting D’Andre Swift from Georgia. Behind a solid O-line, this man could be a force in the NFL. Fins are stiff at WR position, so with improved O-line and running game they could set up their future QB for success.

This brings us to what we are suggesting Dolphins should do. They should wait another year for a QB and select Clemson’s, Trevor Lawrence. Trevor is touted as No1 pick in the NFL draft since his high school days. He’s a perfect QB prospect. People even claim that he is better than Andrew Luck was before his draft night. Some people go even further and compare him with another Colts legend Peyton Manning.

Lawrence would make any team instant contender with his presence. His stats say it all. During his college career, Trevor hasn’t lost a game. He has 28 wins, 64 touchdowns, and 12 interceptions on a 66.9% completion rate.

That says it all. Miami, please wait for Trevor Lawrence. You will do yourself a favor.