Melania Trump Gets Compared To Joe Biden’s Wife, And Here’s Why!

ECONOTIMES – 03/09/2020: Melania Trump is a former supermodel and President’s wife, so the following comparison might offend her. Netizens believe that the First Lady is not as good as Joe Biden’s wife. The likeness between the two women came into focus after an event that happened during Super Tuesday.

During his victory speech after he won in ten out of fourteen states on Super Tuesday, Joe Biden was attacked by two protesters while on stage in front of TV cameras. She was protected by his wife, who shoved of the protester with her bare hands. Biden had his back turned and was in the middle of his speech, realizing what’s happening a moment too late. 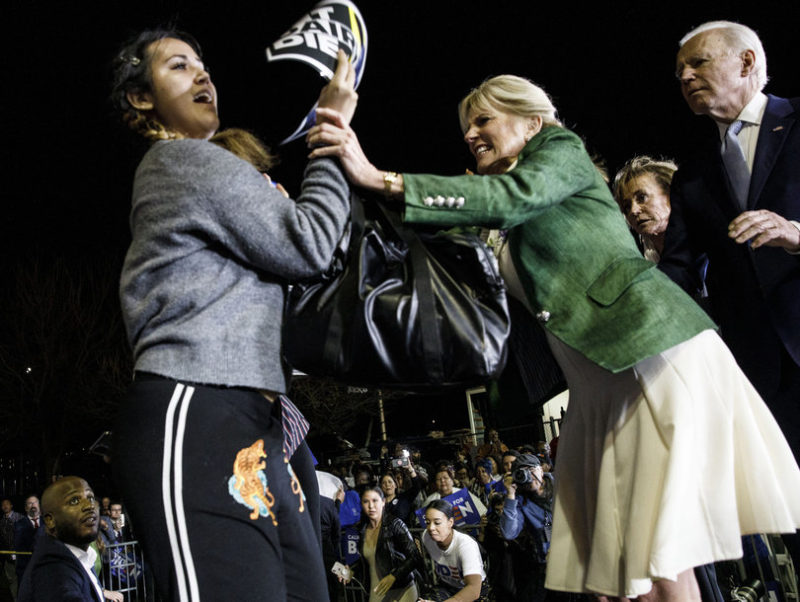 The first protester was handled by security, and everyone thought she’s the last one, only to have another one moments later on stage. The second one was pushed back by Jill Biden, who stood up to protect her husband.

Joe Biden’s wife was helped by his senior adviser, Symone Sanders, who grabbed the women and escorted her of the stage. Jill Biden told her followers on Twitter that during the altercation with the protester, she broke a nail.

Because of this conflict that happened, many people rushed to compare Jill Biden to Melania Trump. Beware this comparison is unfavorable to the First Lady. Most netizens believe that she would never jump to protect her husband this way.

Twitter user @mmpadellan was the first one to conclude this: “YO, Jill Biden is FEARLESS. These two protesters rushed the stage, and Jill had her man’s back. Nice to see that. You’ll never see Melania do that.”

YO, Jill Biden is FEARLESS.

These two protesters rushed the stage, and Jill had her man's back.

Nice to see that.
You'll never see Melania do that. pic.twitter.com/wG0xHobFyk

A Twitter user named @Amy_Siskind shared the same sentiment: “I was trying to imagine what Melania would do in this scenario. Move out of the way? Help the protesters?”

I was trying to imagine what Melania would do in this scenario. Move out of the way? Help the protesters? pic.twitter.com/7SQqR4SwjW

Now, we can’t be sure what Melania would do in a situation like this one, but considering Donald Trump’s recent behavior, it’s only a matter of time before someone attacks him. When this happens, Melania will have her chance to prove doubters wrong.

Donald Trump Accused of Being Emotionless After Tennessee Visit