Kurt Angle is out there with yet another hard claim. Former wrestling champion claims that his boss Vince McMahon would have tried to fight Mike Tyson. Of course, he’s talking about a scenario where both men work for the WWE company. The reason is quite extraordinary: Vince would like to know how does it feel to be knocked out by a former heavyweight champ Mike Tyson.

It is not out of the ordinary for Mr. McMahon to try something like this. He is known as a man who likes to set new standards and move boundaries of what’s to be expected. It is how he came into the situation to wrestle Kurt Angle, but for real. It happened back in the 2000s when the two men wrestled on an airplane on Vince’s insistence. Of course, he lost to a professional fighter such as Angle, but the jaws of defeat didn’t stop him from trying. Not many people would go out against a former Olympic gold medalist. 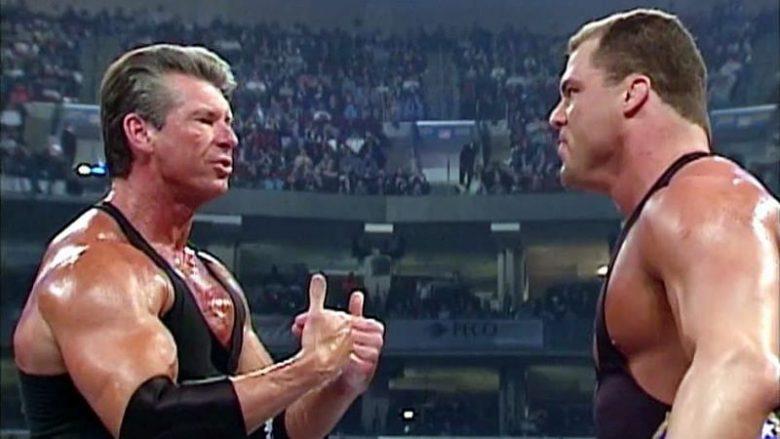 Angle was recently interviewed with Fightful, and one of the subjects was Vince McMahon. Kurt revealed that for Vince, going against the best in the business was his thing. Talking about his employer former Olympian said: “No, Vince will only try once. If he doesn’t succeed, he’s not gonna try again. Vince is one of those guys that wants to feel what it’s like to be up against an Olympic gold medalist or a World Champion boxer. He wants to feel that knock out.”

If you didn’t know just how competitive Vince is, there you have it. But, that’s not all. The owner and CEO of World Wrestling Entertainment received some more praise from Angle. Kurt continued by saying: “He wants to feel getting slammed. He’s crazy. The guy always tests himself. He wants to test himself against the best.”

This is where the story brings us to the former world heavyweight champion Mike Tyson. Kurt Angle claims that Vince would like to try his fists against one of the best ever. Talking about this fictional situation Angle said: “If Mike Tyson was there, Vince would say, ‘Hey, let’s go one round,’ and Vince would do it. He really would. He would want to know how it feels to get knocked out by Mike Tyson. That’s just how Vince is.”

Kurt also took time to talk about his wrestling prowess. He’s also not one to shy from a challenge and is really confident in his abilities. Talking about real wrestling down on the mat, Angle believes that rarely who in the company could beat him. On this subject, he said: “It wouldn’t take me long to finish them off. But, someone like Charlie Haas or Shelton Benjamin would take me a while. ‘Cause those guys are experienced wrestlers.”

This should all be taken as a compliment from a guy who managed to win a gold medal at the 1996 Atlanta Olympic games, wherein final match he fought with a broken neck. After all, Kurt Angle knows a thing or two about wrestling and one on one match-ups.

The Benefits And Harms Of Boxing