Madonna went overboard this time, or did she? You can judge it by yourself, from the photos she shared on Instagram. After all, she’s an artist, and the photos are sensational to say at least. Like one could have guessed the Internet as quick to react.

You should visit Maddona’s Instagram page if you haven’t already, as there’s a danger people in charge could remove even the censored photos. After all, our society can’t be exposed to a little nipple from the Queen of pop. Are we going to ignore that Madonna looks amazing at the ripe age of 63? The latest set of photos she released is an artist expressing himself, and we are all for it. In the pictures, the American Pie singer is wearing fishnets and black Louboutins while in others she’s completely naked with intimate parts of her body being exposed. 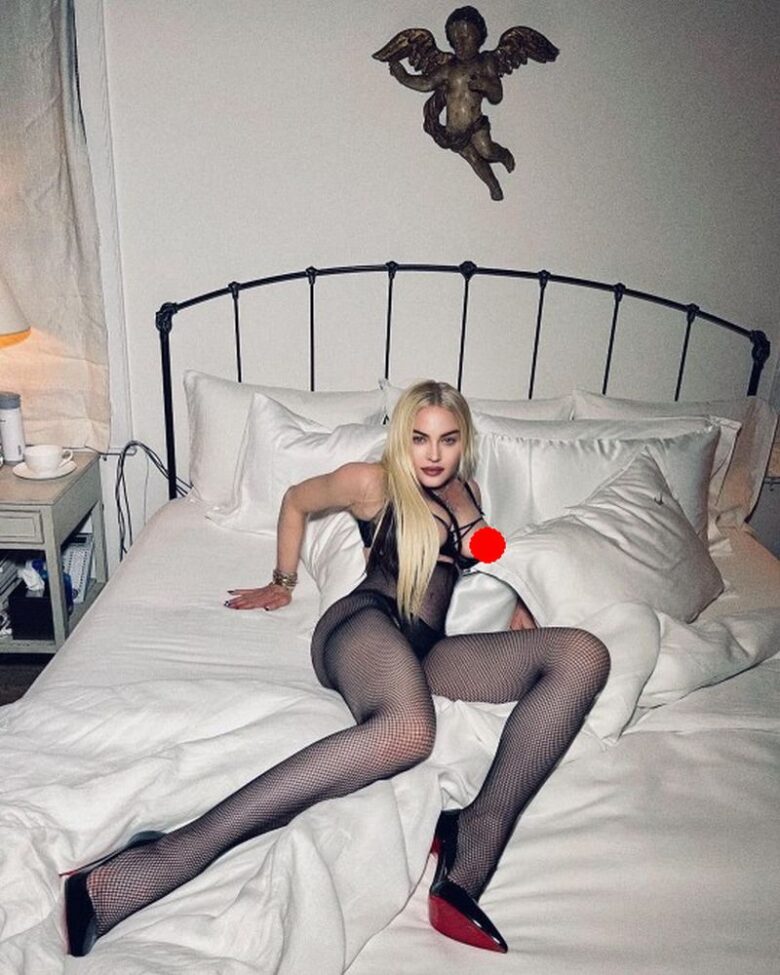 We are thrilled Madonna shared these photos with the public. She never shied too much from controversy and it’s too late to change now, nor she should. The first to criticize her was Piers Morgan who described the photos as “rock bottom.” At the same time, Anneka Rice wrote: “Madonna and I are exactly the same age. I presume she’s searching for her phone charger. If I tried that I’d never be able to get up again …”

But, the one interaction which was funniest to us, was made between Kate Beckinsale and her daughter Lily. The Underworld actress sent the photos to her daughter Lilly Sheen that was mesmerized by what she saw. The Pearl Harbor actress made it look like she shared intimate photos of herself. Kate sent the photo and wrote:” Do you think it’s too much that I posted this? The thing is my a** looks good.” Lily answered with: “I’m a little confused I must say. I do think it’s a little much but it’s also very arty.”

Luckily, Kate wasn’t prepared to let her daughter be in disbelief for too long and she quickly revealed who is behind the photo: “Like I’d ever… I can’t believe you can’t recognise your own mothers a*us from under the bed (sic).” While Kate was having a good tie, her daughter was practically dying from disbelief. Lily described the situation like this: “I couldn’t even sign onto Instagram and check I was so confused. I’m so relieved. I legit sat down to deal w that. My coworker came up and asked if I was on break (sic).”

But, after the shock has passed away, Lily did admit that she wouldn’t be surprised or embarrassed even if that was indeed her mother. What she said, is that she would above all else be concerned. Kate couldn’t believe that her daughter actually fell for it: “As if I’d take and post that you maniac. Also, what am I doing under the bed and when did I get that rug.”

While we find Kate’s joke is right on spot, we wouldn’t be surprised if she pulled something like this on her won. After all, she knows to share racy photos of her posing on Instagram in high heels and latex pants. In addition, she’s also very flexible, as her Instagram proves, so she could pull these Madonna under the bed moves.