Kate Beckinsale went off to show off and she did just that. It is amazing to see that the actress has a toned body, and she even blessed our views with her set of abs. Instagram is a nice place if you’re following the British actress.

The Underworld actress has a lot of appeal and she showed most of it with her latest post. Leather pants, a tube top, and platform boots with the highest of heels were her outfit of choice. Her legs were tied very carefully by this Christian Louboutin product. She spiced it all with a long fur coat, that interestingly was paired with her cat. The cat Clive is getting a lot of publicity these days, and it’s all well deserved. The photo was a bit aggressively captioned with: “Bi**h u get 2 and that’s it.” It is a three-set photo, and there’s plenty to enjoy if you value beauty. 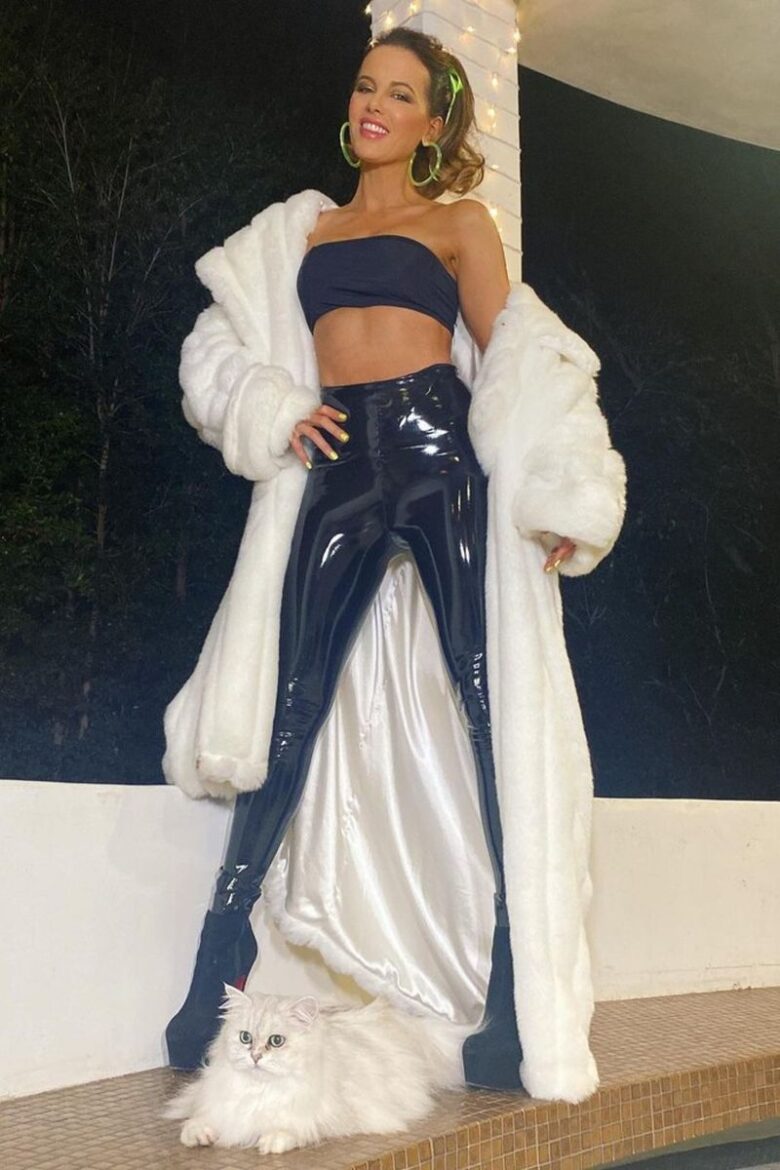 While our redaction simply adores Kate, she was under a lot of media scrutiny in the latest weeks as she wasn’t shy talking about her IQ. Many people were offended as she claimed that her high IQ was the reason she isn’t a bigger star in Hollywood. She described her intelligence as one of the principal reasons why she was handicapped from the start in Hollywood.

During her most recent Howard Stern interview she addressed this by saying: “Every single doctor, every single person I’ve ever come across has said, ‘You’d be so much happier if you were 30 percent less smart.’” The Pearl Harbor actress also revealed that she has an IQ of 152, which sets her in the 1% of the population that we consider very gifted.

Further elaborating her stance, she added: “It’s no good to me, though. It’s really not helpful to me in my career. I just think it might have been a handicap actually.” Back in the day, she enlisted at Oxford University to study French and Russian literature. She eventually dropped out to pursue a career in acting. As we said, many people took her words the wrong way, and The Cut even published an article titled Sounds Hard To Be This Hot and Smart.

Beckinsale, isn’t the one to stay silent when called out, so she responded to the news outlet by saying: “Are we really jumping on women for answering a question truthfully about their intelligence or education? Are we really still requiring women to dumb themselves down in order not to offend?”

This is not something Kate is prepared to leave in the dust, so she added: “When I said it has been a handicap in Hollywood it’s PRECISELY because being female AND having an opinion often has to be quite carefully packaged so as not to be offensive or, as in this case, deliberately twisted into signifying ones perceived superiority or arrogance. IQ doesn’t actually mean s– – t,” she added. But stop performatively supporting women while pulling crummy s – – t like this.”

Unlike the good people at The Cut, we at demotix.com side with the actress. Go get them, Kate.

Why Is VPN One Of The Most Secure Ways To Secure To The Internet While Maintaining Complete Privacy?