Football Skill You Never Seen Before – NFL Must Take Notice!

These days everyone thinks they’re a star. But, in reality, it’s not easy to be one. You need to stand out one way or another. Today we have a real star in his domain. Quade Cooper is a rugby player from New Zealand. Although he’s a New Zealand citizen, he played for Australia on the international level. It’s a shame he wasn’t noticed by NFL scouts as he has actual skill.

Cooper shared a video on Instagram, showing him throw a football with unparalleled skill. The no-look throw practiced by Patrick Mahomes II is nothing compared to what Quade demonstrated to us. 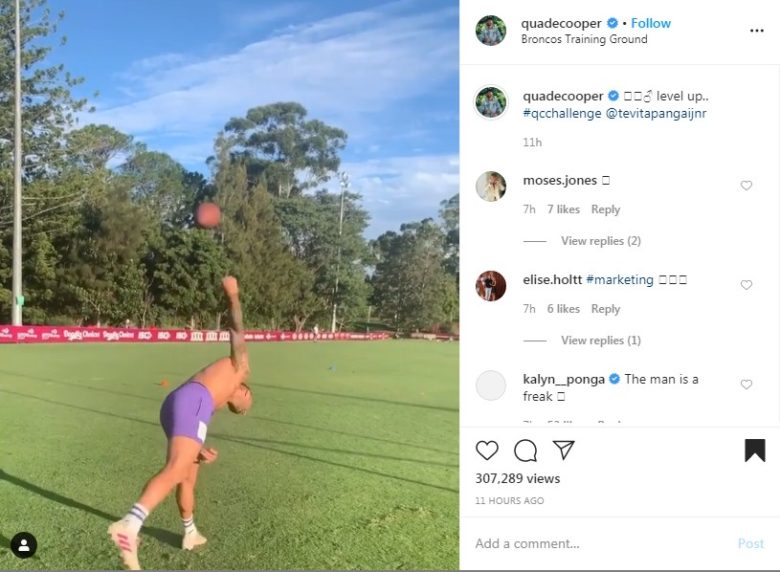 His throws are a response to fans who criticized him for lack of skill. He proved the doubters wrong. Cooper’s video is currently going viral because what he did can’t be done by many, even professional NFL quarterbacks.

Read Also: Unnatural Baseball Bat Trick That Needs to be Seen More Than Once!

Ten clip in question has more than 3 million views on all social media platforms. The US public started paying attention after a popular Instagram page, @sportscenter shared his video.

While this is a tricky skill that can hardly be applied to the gridiron, it’s still amazing. Cooper and his receiver are in sync, and it’s no wonder the video attracted so much attention.

THESE ARE WILD. ?? (via @quadecooper)

Quade Cooper is still an active player currently being employed by Kintetsu Liners from Japan. While it’s probably too late to sell his trade at the NFL level, some of the people who commented on this post believe he has the needed quality. One of the funnies comments stated that he has better accuracy than Dallas Cowboys quarterback Dak Prescott.

We’ll leave you to enjoy the clip, as you probably have it on replay and well-deservedly so.

Shakira’s Son Photographs Her Without Makeup