Home Celebrities Donald Trump – The Weddings And The Brides
Celebrities

Donald Trump – The Weddings And The Brides

Donald Trump is an interesting person, you can’t deny him that. The man who rose through the ranks of real state moguls even managed to become the president of the United States. Somewhere in between, he got married three times. His wives were and are Ivana Trump, Marla Maples, and Melania Trump. The two of those failed to last forever, but the last one with the Slovenian supermodel is still going strong. In this article, we are going to talk a little bit about his marriages and the weddings that preceded them.

For forever, Mr. Trump had a thing for eastern European chicks. Back in 1977, the one who took over his heart was Ivana Zelnícková. The pair quickly fell in love and got married in a secretive ceremony. Back in the day predating the Internet, no photos of this event were leaked. But, there was proof that they’re together and they’re called Donald Jr, Eric, and Ivanka. While the start of this marriage was a secret its fourteen-year tenure was not. Trump and Ivana were under the spotlight all the time, as tabloids weren’t prepared to leave them alone. 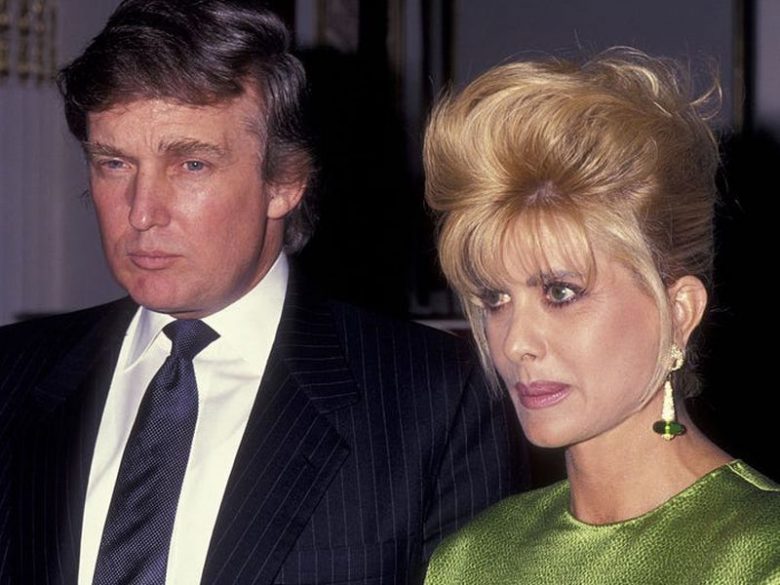 Their divorce became the talk of the town in 1989 when he was caught cheating on Ivana with his future-to-be wife Marla Maples. The second wife of Donald even commented on the whole thing to vanity fair in 1990 saying: “I feel for her. I think she must have known in her heart it wasn’t about me. There would never have been any discussion of my and Donald’s friendship if things had been good… I was his friend for so long and I constantly said to him, ‘Stay and make it work. Don’t give up the marriage—you’ve got your kids.'”

At the same time, Ivana didn’t see things the same way, nor she does today. Even in 2017 she still holds a grudge towards Marla: “I don’t talk about her. She’s a showgirl. Never achieve anything in her life.” the split between Donald and Ivana was worth $14 million which wasn’t considered as enough by many people, but considering that the 45th US President was on the brink of a bankrupt it had to suffice. 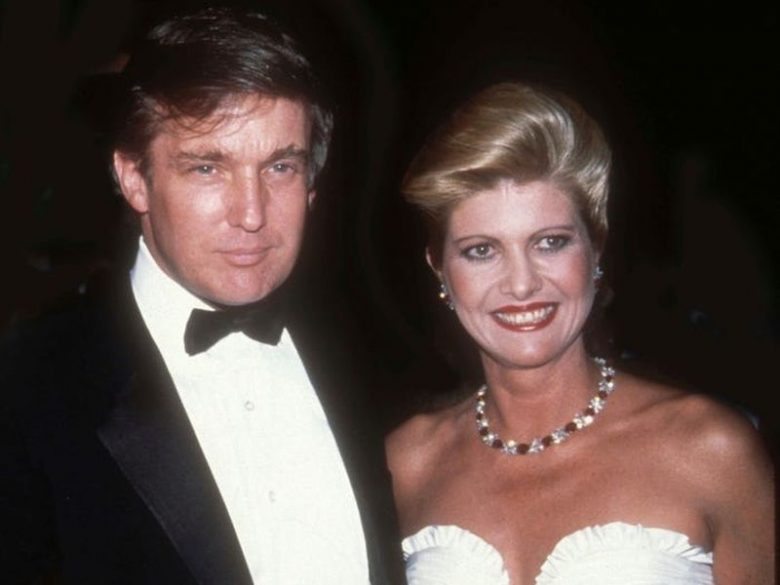 Once Ivana was in the past it was time for Trump to move one. His former mistress was now about to become his legal wife. In an interview with Vanity Fair Maples described their first encounter: “I had seen him at different places throughout the years, and just said hello, I was just somebody he shook hands with.” The first time they faced, the location was Madison Avenue.

Before getting married in late 1993, the pair welcomed their baby girl Tiffany to the world in October. The marriage only lasted for six years, not managing to come near to the one of Donald and Ivana. Talking to Access Hollywood Live maples commented on their separation: “I think you always hope in marriage to bring out the best in each other, but after many years we realized, we weren’t. And then you have to move on… And you know girls in your twenties, you think you can change them in a way.” 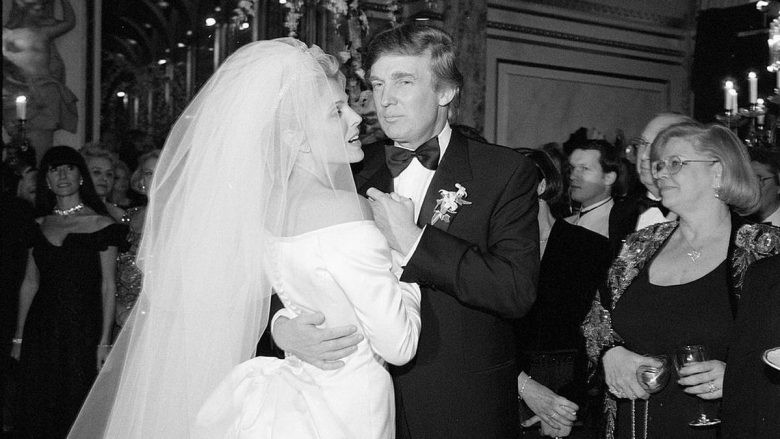 The ceremony itself, while it still mattered was held at Plaza. The gown that the bride wore on the day was a silk one finished with a tiara worth $2 million made by no other than Carolina Herrera. At the tables, the guests could enjoy various dishes including fish, caviar, lamb, and beef. The wedding cake was seven stories tall, which goes with what Trump did back in the day building stories and stories of buildings.

The marriage fell apart in 1996 when Maples was accused of having an affair with a bodyguard of hers. Luckily, this time around Trump wasn’t deemed to lose too much money as they had a prenuptial contract. After his first experience with Ivana, Donald wasn’t prepared to get married without signing one. Eventually, it managed to protect him, and Marla spent the years after the split raising their daughter in California. She didn’t exit the marriage as a rich person, with only having her $250,000 engagement ring to show for. 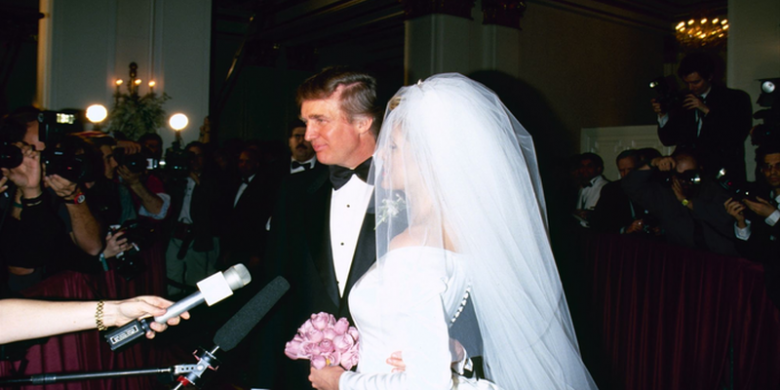 Once again Trump was back in Eastern Europe, this time instead of the Czech Republic, he was in ex-Yugoslavia. In 2005 he organized a massive 350 guests wedding for his new bride, Melania Knauss. The guest list was something else including Barbara Waters, Billy Joel, the Clinton family, and Simon Cowell. This ceremony was something else being organized in between Episcopal Church of Bethesda located in Palm Beach and Trump’s own The Mar-a-Lago Club.

Unlike Marla, Melania went with a Dior gown made out of Duchesse satin. It was so tight that Melania couldn’t walk in it for too long. Luckily she had a Vera Wang dress close by so she changed outfits. While commenting on the wedding Joseph O’Neil of New Yorker wrote: “The newlyweds looked very pleased and happy as they walked back from the altar; far was it for me, their friend, to poke a nose into what was going on in their hearts and in their brand-new, instantly opaque marriage.” 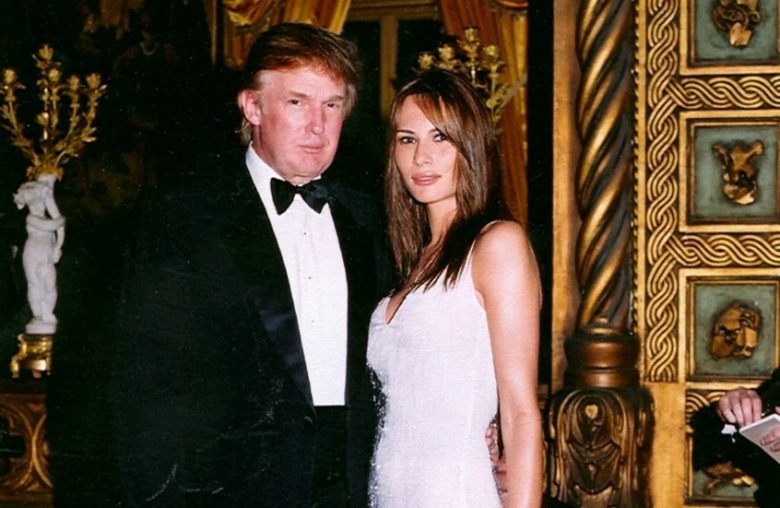 Back in the day, it was one of the biggest events of this kind as confirmed by O’Neil: “Melania looked lovely, and the fifty-eight-year-old Donald—as a friend of the family, I was bound to call him and his wife by their Christian names, even if Donald reportedly liked being called ‘Mr. Trump’—looked uncharacteristically bashful; bashful, that is, by comparison with his character on ‘The Apprentice.’ My impression was that he was in awe of some of the people who clapped as he made his way down the aisle, specifically those who exceeded him in the matter of net fame.”

The wedding was so extravagant and the guests were able to enjoy in caviar and Crystal. The best part for the sweet goers was the fact everyone got a small cake to take home.

What Are Digital Water Curtains And How Do They Work? – 2022 Guide