DEADLINE – 12/28/2019: President Donald Trump had another active day on Twitter. This time he showed his good side. POTUS decided to give praise to certain actors and their movies. A significant change from rant aimed at Nancy Pelosi. The films in question are Vampire Slayer and Midnight Cowboy. Unlike it’s usually the case, Mr. President had praise for Hollywood actors and movies. He singled out Jon Voight and Kristy Swanson for their roles in these movies.

President Trump described Voight as a ‘great guy’ whose participation in Ray Donovan didn’t go unnoticed by Trump. Trump also mentioned his two movies, Midnight Cowboy and Deliverance to The Champ, describing the latter one as one of the best boxing movies of all time. 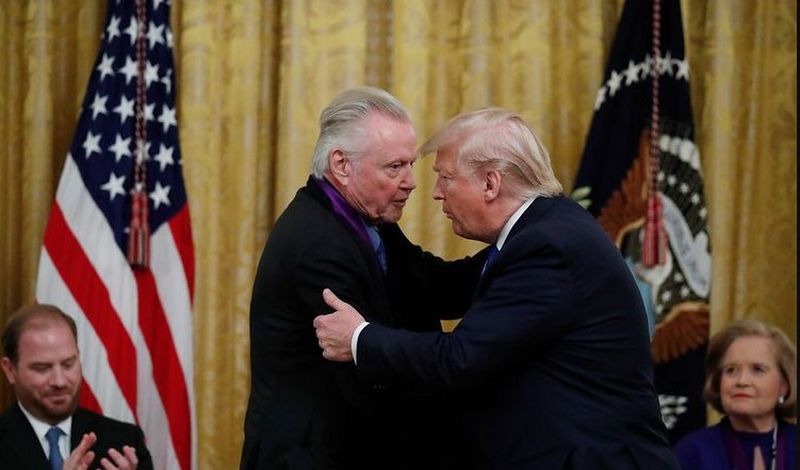 In the end, the President told us that Voight knows how to bring out the best out of a role and that he also loves the United States of America.

Academy Award winning actor (and great guy!) @jonvoight is fantastic in the role of Mickey Donovan in the big television hit, Ray Donovan. From Midnight Cowboy to Deliverance to The Champ (one of the best ever boxing movies), & many others, Jon delivers BIG. Also, LOVES THE USA!

A few days earlier, Mr. Trump shared Jon Voight’s Twitter video. In the clip, the famous actor talks about the impeachment process. Hollywood actor voiced his support for Trump, which is the main reason for Trump singling him out for praise.

Read Also: Donald Trump Can Win Again In 2022 According to Michael Moore

It seems that Donald Trump has praised only for those who support him. In addition to Voight, he also congratulated Kristy Swanson. Buffy, The Vampire Slayer actress, wrote on Twitter that she loves 45th US President describing him as ‘the best.’ This tweet prompted an answer from POTUS. Mr. Trump thanked Swanson and wished her a great year.

Thank you Kristy, have a great year! https://t.co/IahxpXNZg7

After showing us his good side, Mr. President will surely be back to his old self in no time. His Twitter account has been buzzing every day, despite the Holidays. But, unlike these tweets of praise, he is more open to threatening Russia and Iran, fuming at Nancy Pelosi or rumbling about no-good democrats.