NEWSWEEK – 01/23/2020: Donald Trump is all about setting records during his presidential term. On Wednesday, he broke his record for the number of tweets during a period of 24 hours. During the second day of his impeachment trial, he tweeted 140 times.

Donald Trump also set a previous presidential record for a number of tweets during one day, and it was 123 tweets. This info was confirmed on a website called Trump Twitter Archive. 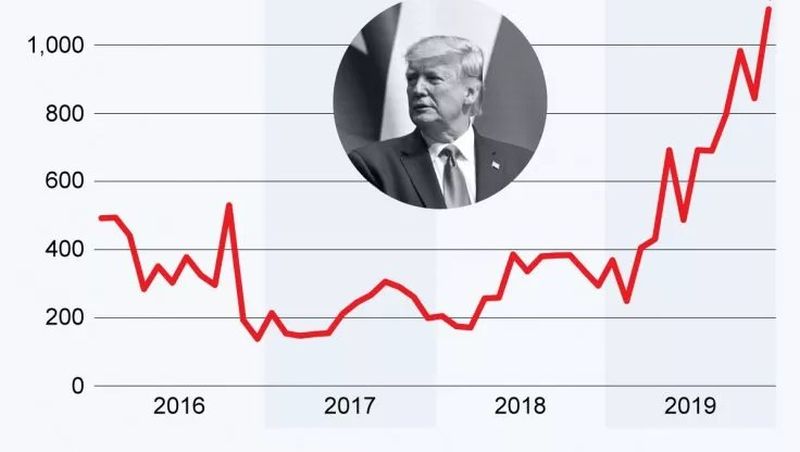 The official presidential Twitter account of Donald Trump, @POTUS, released the first tweet 50 seconds after midnight. This was early in the morning on Swiss time, as President is currently in Davos. Mr. Trump and his daughter Ivanka Trump are attending the World Economic Forum in Davos.

By 1 a.m. ET, Trump already had 41 tweets. By 2 a.m., he had 48 tweets. After this surge of Twitter messages, he paused until 7:30 a.m. when he continued to tweet restlessly. The last post for the day was at 6:18 p.m. Most of his tweets were re-tweets, but nevertheless, he was the most active user, probably in the World.

Considering that his impeachment trial is underway and he’s not present most of his tweets were regarding the trial. He simultaneously attacked Democrat lawmakers, the impeachment process, and Rep Schiff.

“This is all about undermining the next Election.” Liz Peek, @FoxNews

Of course, Trump didn’t want to spend all of his tweets on his enemies. As usual, he used Twitter to brag about his achievements. One of the subjects was the trade deal with China. He also talked about his visit to Switzerland, the US economy, and other matters he personally was responsible for.

Despite the vast number of tweets coming from Donald Trump, he didn’t break his personal record. His 140 tweets are the most by him after he became the President. During his pre-presidency days, he managed to tweet more than 160 times in 2015. At that time, he was working on his TV reality show, The Apprentice. All of his tweets were regarding that show.

Vin Diesel Takes His Shirt off and Shows His Ripped Body