Conor McGregor Rises Above The Likes of Messi, Ronaldo, And LeBron

Conor McGregor is a record-setter. We already know this. But, for someone who is not in the top tier of people in his sport, he’s making crazy amounts of money lately. According to the latest Forbes list of wealthiest athletes, he is the cream of the crop among all sportsmen in the world. When it comes to fighters from MMA, he’s the only one in the top 10, making his accomplishment even bigger. It is funny to see it, considering his personality, thirst for money, and the fact he’s not into one of the better-paying sports such as basketball, football, or even Formula 1.

Forbes releases its list once a year, and the one that came out a few days ago has the MMA fighter towering above such names as Lionel Messi and Cristiano Ronaldo. During the previous year, he’s the one who made the most money. The period in question is the one from May 1st of 2022 to May 1st of this year. During the last twelve months, the Irish fighter amassed a staggering $180 million. Most of his money came from endorsements and the sale of his whiskey brand. We are talking about a combined sum of $158 million. 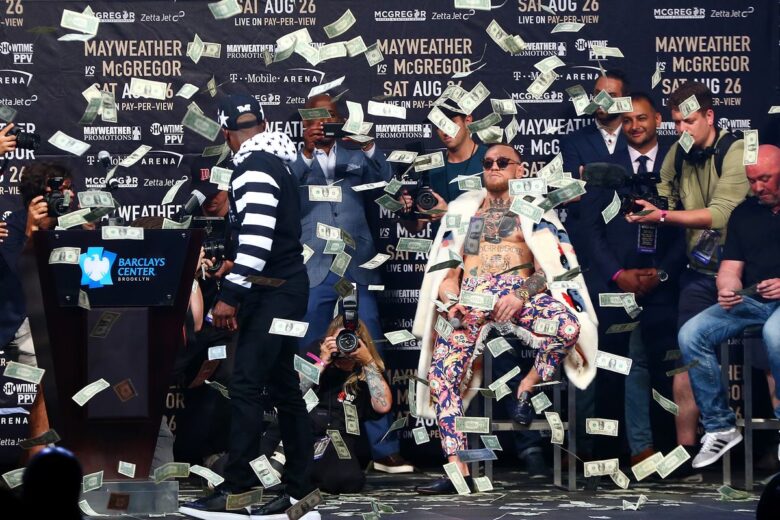 Trailing behind him are the Argentine ace from Barcelona with $130 million earned in the last year and Portuguese superstar Ronaldo, who made only $120 million. These three men are the ones that lead the top ten list of the world’s best-paid athletes. The list moves to the United States from here. It is interesting to see that the fourth place is occupied by one Dak Prescott. For you not invested in NFL, he’s the quarterback for Dallas Cowboys. It is a good investment to be the QB for the world’s biggest sports franchise. Cowboys turn led to gold, and Prescott who only recently signed his multi-year extension is already making millions out of endorsements. The amount he earned is estimated to be $107.5 million. Behind him, we have a legendary basketball player from Ohio, LeBron James. King James took home only $96.5 million. Looking at the top five, we are only surprised that Prescott rakes such high income, considering his short tenure in the league, and the fact that NFL is not a global sport such as football or MMA.

Conor McGregor is the world's highest-paid athlete, according to Forbes ? pic.twitter.com/kKqZNZ7cQ4

The next five spots on the list are occupied by PSG forward and Brazilian superstar Neymar who made $95 million, tennis legend Roger Federer with $90 million rankings above his piers such as Novak Djokovic and Rafael Nadal, Formula 1 racer Lewis Hamilton who made $82 million, another QB, the legendary Tom Brady who made $76 million after his transfer to Tampa Bay, and NBA player Kevin Durant who rakes in $75 million annually. Forbes makes this list by counting in all income an athlete makes which is a combined sum of all salaries, prize money, bonuses, sponsorship deals, licensing, and other incomes. McGregor wasn’t too active in the octagon, but he has a fight coming in July against Dustin Poirier at UFC 264. Conor’s only fight during the last year was also against Dustin, and he lost it by a knockdown.

We can say without a doubt that Conor McGregor only has two things on his mind in the next year. Win a few more matches starting with his bout with Dustin Poirier, and earn some more money. By now we know that Conor is an excellent fighter and a successful businessman in his own right.

Top 5 Streaming Services: Choose the Best one for Germany 2022