INDY 100 – 01/12/2020: The Trump family seems to be an inspiration to comedians in the United States. The latest member of the famous family to find himself targeted by comedians is Donald Trump Jr. They are mocking him for calling people to enlist themselves to the army while he is not prepared to do the same by himself.

At Armed Forces Career Center in Brooklyn, New York, you can find photos of Donald Trump Jr. The pictures show him with parole that says: ‘I’m not enlisting but you should.’ Below the image, you can see additional text that says: ‘There’s weak and then there’s Trump weak.’ 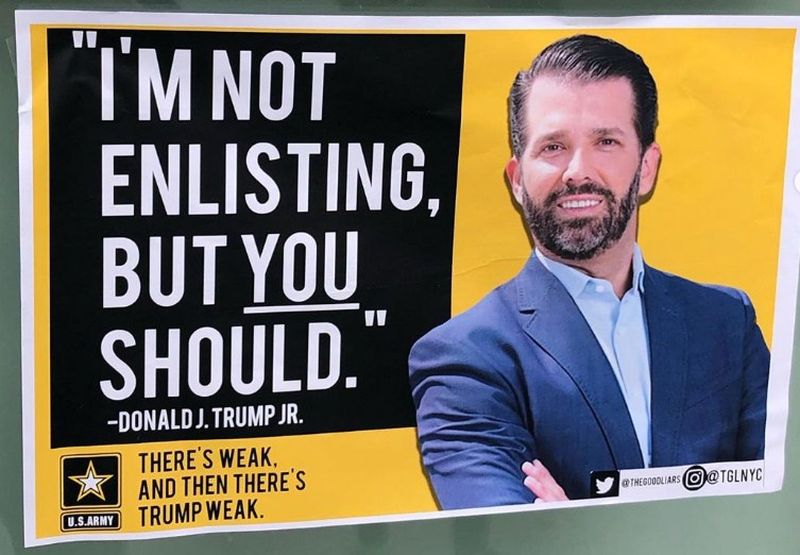 These photos started making rounds around many recruitment centers in response to the emerging USA/Iran conflict. The comedians that created pictures of Donald Trump Jr consider his father responsible for a possible war, which will result in sending more troops to the Middle East.

In a case of war, Donald Trump Jr certainly won’t be seeing Lut desert up close. It is a known fact that his father, the POTUS also skipped draft when it was his turn to defend US interests in Vietnam.

Trump Jr is more likely to go hunting than to defend America as a member of the US army. As you know, Donald Jr is a passionate hunter, who doesn’t even shy from taking down endangered species. He also loves to pose with weapons in his hands designated for the hunt, sending political messages rather than standing up for your country as many young lads will.

The photo in question was created by comedians who call themselves The Good Liars. Their names are Jason Selvig and Davram Stiefler, and they explained the meaning behind their work. According to this duo, they want to show the US public what kind of people Trump’s are. Donald Trump Jr will do everything in his power to avoid military service, the same way his father did; It’s something that runs in their family, concluded the duo.

How Will Prince Harry and Meghan Markle Make £34 Million a Year?