Queen Elizabeth II has four children, eight grandchildren, and twelve great-grandchildren. She became the queen in 1952 making her the longest-reigning monarch in British history. 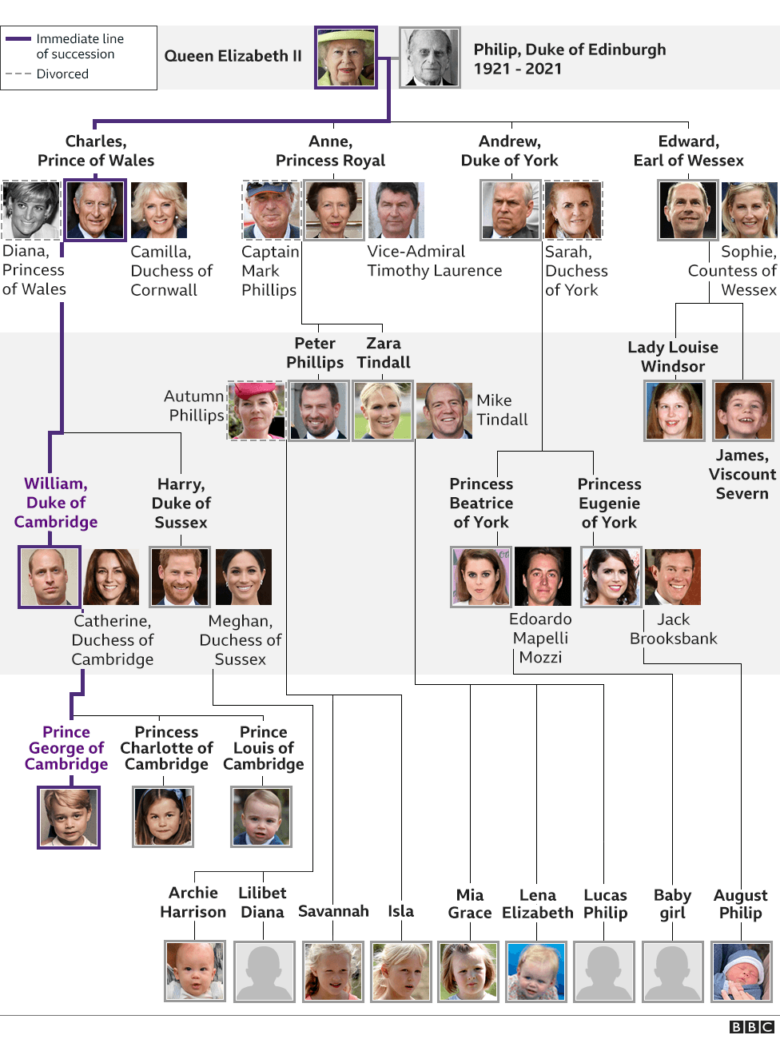 Meet the new generation of Royals and find out more about the line of succession.

The Queen and Prince Phillip 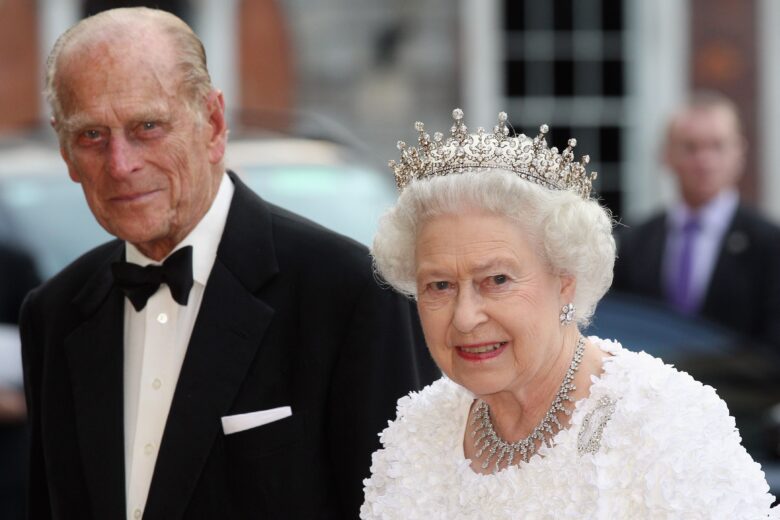 Princess Elizabeth became the Queen when her father King George VI died in 1952. Five years prior, in 1947, Princess married Prince Phillip, a former Prince of Greece and Denmark, who became the Duke of Edinburgh. They were married for 74 years before Prince Phillip died on April 9h, 2022. The Queen and Prince Phillip have four children – Charles, Anne, Andrew, and Edward. Prince Charles was born in 1948 and is first in line to the throne. In 1981, Charles married Diana Spencer, who became Princess of Wales. The couple had two sons – William and Harry. Following their messy divorce in 1996, Lady Diana passed away in a car crash in 1997. Seven years later, in 2005, Prince Charles married his long-time confidante Camilla Parker Bowles with whom he had an affair while married to the late Princess of Wales. The biggest question imposed by the public is will the Duchess of Cornwall become a queen once Prince Charles is the king? The answer is no. Camilla will have the role of “Princess Consort”. For now, Prince Charles’ duties revolve around helping the Queen with her royal commitments. Anne, Princess Royal was born in 1950 and is the 17th in the succession line to the British throne. her job is to perform the official duties in the name of her mother, Queen Elizabeth. However, Princess Anne was always very involved with sports and is the first member of the Royal family to compete at the Olympics. She married two times. First, in 1973, Anne married Captain Mark Phillips who declined the title of earl, leaving their children – Peter Phillips (1977) and Zara Tindall (1981) without titles. They divorced in 1992. That same year, Princess Royal married Sir Timothy Laurence. 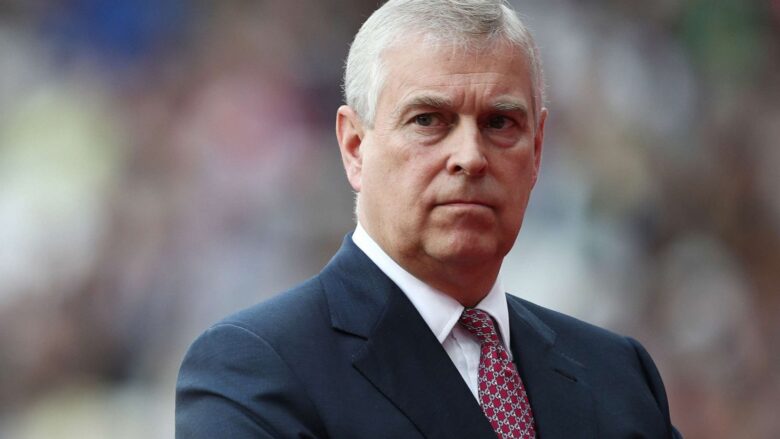 Duke of York was born as the third child and a second son to the Queen and late Prince Phillip in 1960. He married Sarah Ferguson, Duchess of York in 1986 and the couple had two daughters – Princess Beatrice and Princess Eugenie. The royal couple divorced in 1996. Even though Prince Andrew is the ninth in line to the throne, he withdrew from his royal duties following a damaging interview in 2019 after his public figure was tarnished by the affair involving pedophilia. 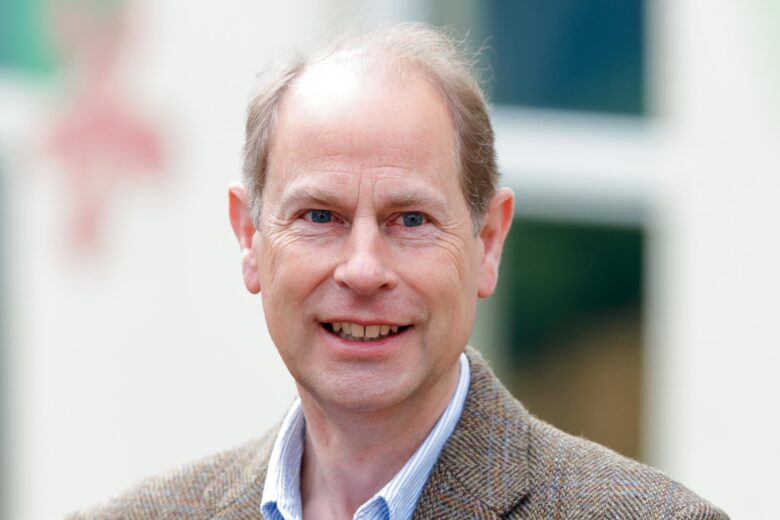 Earl of Wessex was born in 1964 and is the youngest child of Queen Elizabeth II and late Prince Phillip. He is 14th in line to become the king. Prince Edward married Sophie, Countess of Wessex with whom he has three children – Louise, James, and Viscount. In 2002, Prince stepped back from the duties in his film production company and took on full-time royal duties in helping the Queen with her engagements.

The new generation of Royals 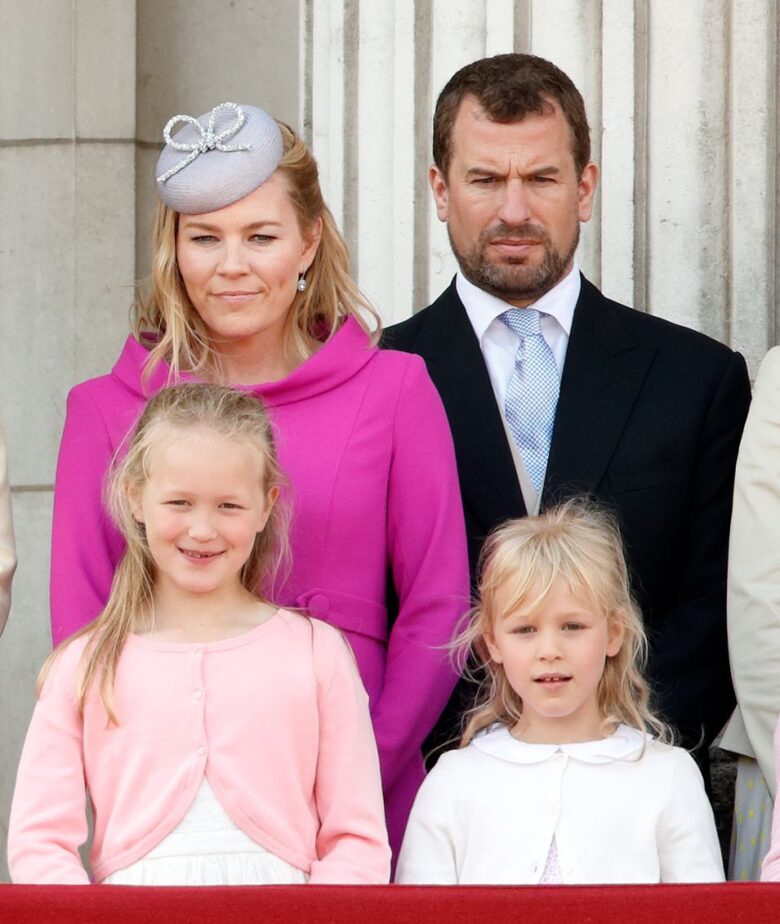 Savannah Anne Kathleen Phillips was born in December 2010 to Peter Phillips and Autumn Phillips. She is the first grandchild of Princess Anne and the first great-grandchild to the Queen. Peter and Autumn married in 2008 and divorced in 2022. However, the estranged ex-spouses remain on the royal premises, in Gloucestershire raising Savannah and Isla (2012), their younger daughter, together. Savannah and Isla are 19th and 20th to the British throne, respectively. 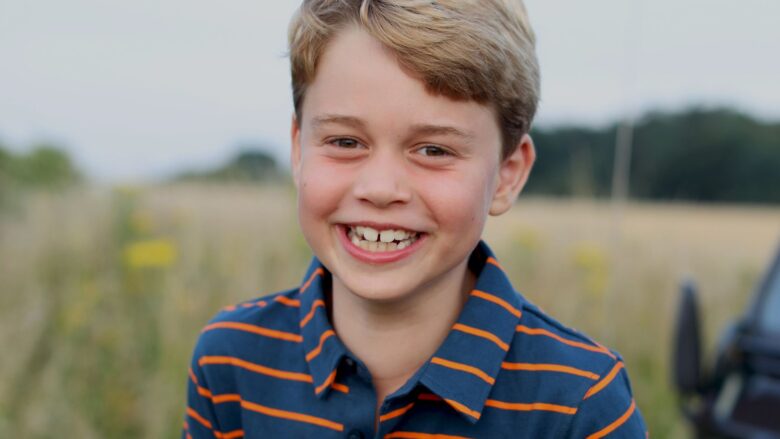 Prince William and Kate Middleton, Duke and Duchess of Cambridge, married in 2011. On July 22nd, 2013 they welcomed their first child – Prince George Alexander Louis who became the third in line to the throne, right behind his father, and grandfather, Prince Charles. The world celebrated the arrival of the future king, joining the delight of the Royal family. Despite the usual protocol, when Prince George was christened in October 2013, Prince Harry was not asked to be his godfather, nor was Kate’s sister, Phillipa Middleton. Zara Tindall, née Phillips, the daughter of Princess Royal Anne, married English rugby player Mike Tindall in 2011. Three years later, they welcomed a daughter – Mia Grace. She is currently the 21st in succession to the throne. Duke and Duchess of Cambridge had their second child in May of 2015. Due to the change of the succession rules in 2013, Princess Charlotte Elizabeth Diana became fourth in line to the throne. Two months later Charlotte was christened at St. Mary Magdalene Church in a small ceremony of only 30 guests. 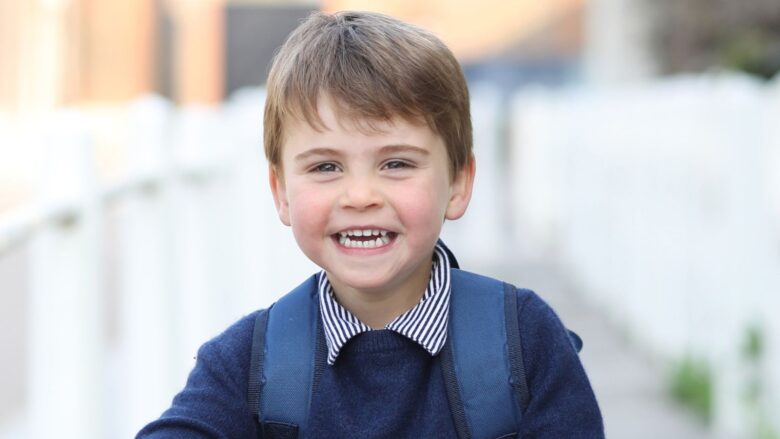 Prince Louis Arthur Charles was born in April 2018, at the St. Mary Hospital, just like his older siblings. Prince William brought George and Charlotte to meet their younger brother at the front steps of the hospital just hours after being born. Duchess of Cambridge went home with a baby only several hours after she gave birth to her third child. Prince Louis is the first male heir to lose his succession to the British throne to his sister Charlotte since the change to the Succession to the Crown Act of 2013. He is now fifth in line, after Prince Charles, Prince William, Prince George, and Princess Charlotte. Prince Louis was christened at two months old, at Chapel Royal. This was the first time that the family was seen in public together. However, Charlotte stole the show when she turned to the media saying: “You’re not coming!”. Just a month before, little Princess stuck her tongue out to the photographers at Prince Harry and Megan Markle’s wedding. 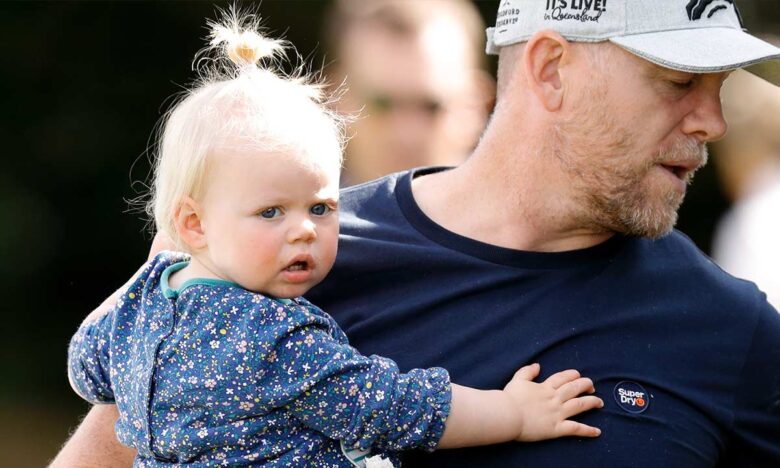 In June 2018, Mike and Zara Tindall had their second daughter Lena Elizabeth Tindall. Zara Phillips suffered one miscarriage before delivering Lena. The newest Tindall addition who was named in honor of Queen Elizabeth takes 22nd place in line to the throne. Archie Harrison Mountbatten-Windsor was born in May 2019 and is the first child to Prince Harry and Megan Markle, Duke and Duchess of Sussex. Next year, in 2022, his parents decided to step away from the royal duties and moved their family to the US. Still, little Archie has rights within the Royal family and is the 7th in line to the British throne. 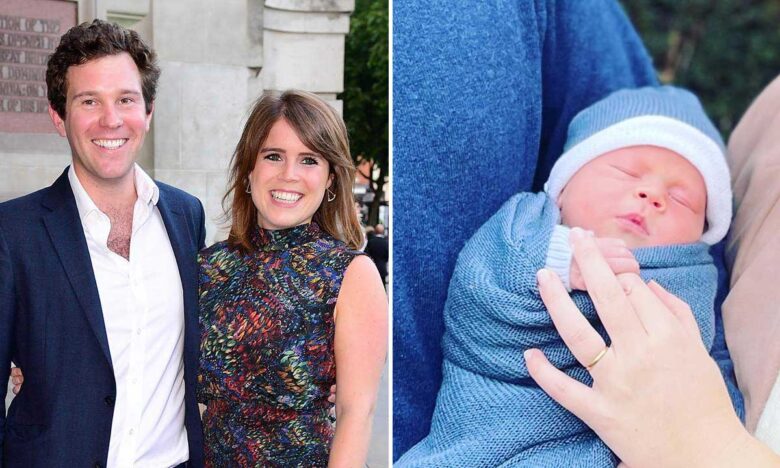 Princess Eugenie, daughter of Prince Andrew and Sarah Ferguson, and Jack Brooksbank welcomed their son August Philip in February 2022. He is currently in 12th place in the cue to the British crown. “Her Royal Highness and her child are both doing well,” read Buckingham Palace’s statement at the time, noting that the queen, Prince Andrew, and Sarah Ferguson were all “delighted”. 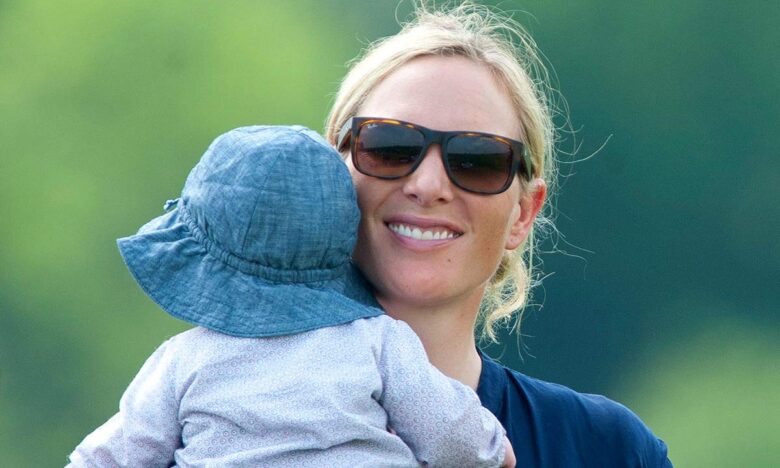 Zara and Mike Phillips welcomed their third child, a son Lucas Philip, on the bathroom floor of their home. The little surprise baby arrived in March of 2022 and became the 13th successor to the throne. 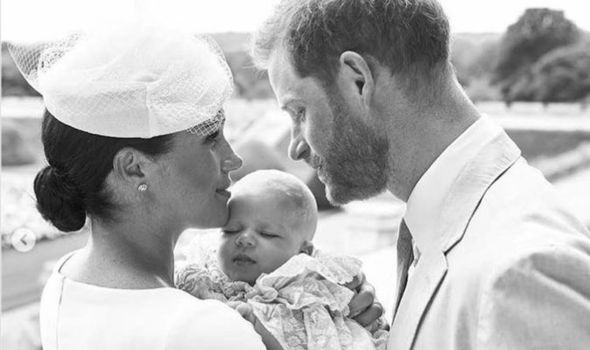 Lilibet “Lili” Diana Mountbatten-Windsor was born on June 4th, 2022 to Duke and Duchess of Sussex. She became 8th in line of succession to the British throne. Prince Harry and Megan Markle named the little girl in honor of the Queen and late Princess Diana. Lili was born in Los Angeles, where her parents currently reside. Sienna Elizabeth Mapelli Mozzi was born on September 18th, 2022 to Her Royal Highness Princess Beatrice, the daughter of Prince Andrew and Sarah Ferguson, and Mr. Edoardo Mapelli Mozzi, who is already a father to a son from a previous relationship. Sienna is the twelfth great-grandchild of Queen Elizabeth II and is currently 11th in the line of succession.