THE GUARDIAN – 02/09/2020: The feud between Donald Trump and Nancy Pelosi won’t end anytime soon. Considering Trump’s nature, it has only begun. During the President’s State of the Union speech, there was an incident involving Pelosi ripping apart her copy of Trump’s speech. Now, POTUS shared a video of Pelosi shredding the document while he’s giving an address on Tuskegee Airman.

Nancy Pelosi asked of Twitter and Facebook to remove the named video as she ripped the document when Donald Trump was done speaking and not during the speech. But, her request was denied. 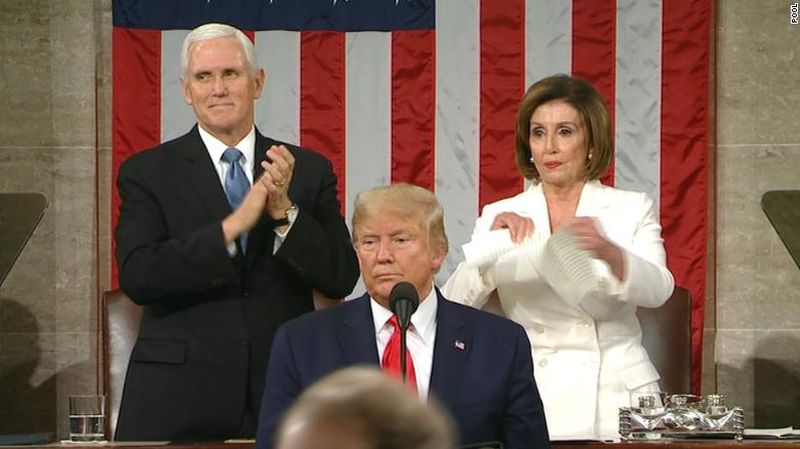 Pelosi’s supporters are furious, and deservedly so, as the video is trying to make House Speaker look like the bad guy. They claim that this is not the first time Trump is lying to people and that it needs to be stopped. Drew Hammill, who is chief of staff for Pelosi, claims that the clip is misleading and that hundreds of thousands of Americans who are not aware of what genuinely happened are going to side with President Trump.

Hammill went on to criticize the two social networks in question, Twitter, and Facebook. He stated that they are obviously more interested in clicks, money, and shareholders’ interests rather than with truth.

The video is five minutes long, and Pelosi is ripping the speech through the entire length, while the themes of Trump’s speech shift from subject to subject. This edition makes it look like Pelosi had total disregard to every part of Donald Trump’s State of the Union speech. The truth is that Pelosi waited for President to end his presentation to rip what she called a manifesto of lies.

While Facebook’s and Twitter’s decision to reject Pelosi’s request doesn’t seem like a big deal right now, it will be one in the foreseeable future. The general elections are in November, and we can expect more misleading, misguiding, and merely false information about the candidates to start circling the net. This needs to be stopped before someone once again lie his way into the White House.

Kim Kardashian Thinks Psalm West Is the Reincarnation of Her Father