EXPRESS – 02/29/2020: It is not often these days that a famous person defends Donald Trump. POTUS isn’t popular among celebrities, but in certain circles, they do cherish him. The chairman of UFC, Dana White, went out of his way to speak about President Trump and their friendship.

The two of them have been friends for over two decades. This is the reason why Dana White decided to defend the President and attack those who criticize him. A few weeks ago, the UFC director was also criticized for appearing at Donald Trump’s rally in Colorado. White was a guest speaker on that occasion. It seems that having a pro-Trump opinion is not allowed if you are famous. 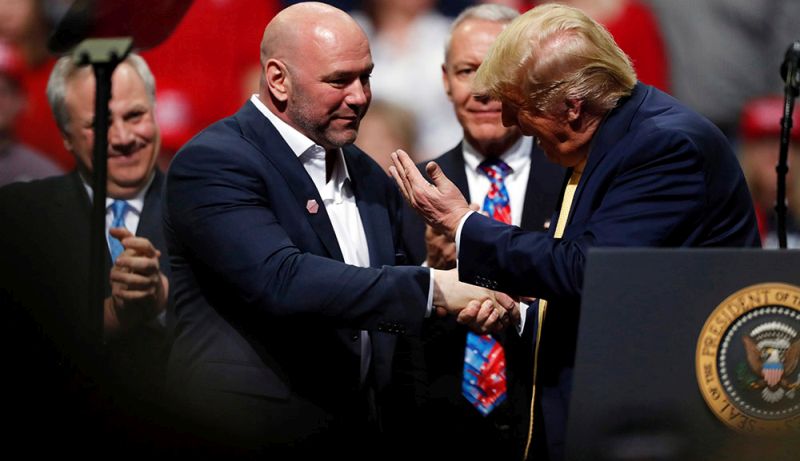 White is known for endorsing Donald Trump publicly. He did it in the past a couple of times, and his appearance in Colorado only shows that he’s still with POTUS. If you remember, he was also giving a speech at Republican National Convention in 2016. His speech helped Trump get the nod to be the Republican candidate.

Some people in the UFC don’t look at White’s behavior kindly. He received backslash every time he endorsed Trump. But, this is not something that worries Dana too much. He’s been friends with Donald Trump for some time now, and he stated that he doesn’t care what his or Trump’s critics have to say.

Talking to TMZ, White said: “If you don’t like me because I’m friends with this guy, that’s your problem, not mine.’’ Dana made it perfectly clear that his friendship with Trump is beyond politics. The UFC director continued by saying: “Yeah, I wasn’t really campaigning. He called me and asked me if I wanted to go to Colorado. He said, ‘Wanna go to Colorado?’ I said, ‘Yeah.’’’

Trump and White have been friends since the early 2000s, and Dana is only returning him favors from the past. Speaking about their beginnings, Dana said: “This guy — when I say this guy, I’m talking about President Trump — is such a good friend and such a loyal, amazing guy, man. He’s a great guy. He’s been a friend of mine for a long time.”