Angelina Jolie Is Seen In Beverly Hills After Her Instagram Debut

Angelina Jolie broke the record when she joined Instagram on August 20th. In only five days, the 47-year old actress gained almost 10 million followers. In the description, Jolie wrote: “Mom, filmmaker, Special Envoy for UN @refugees” followed by a link to the UNHCR website.

The actress opened her social media account with a letter from the Afghan girl talking about the hardships under the new Taliban government. The letter continues to explain the distress the girl’s family and those around it experience every day. Angelina, being the UN ambassador for years, was moved by it, thus sharing it with the world. The little girl’s personal information was censored for obvious reasons.

“This is a letter I was sent from a teenage girl in Afghanistan. Right now, the people of Afghanistan are losing their ability to communicate on social media and to express themselves freely. So I’ve come on Instagram to share their stories and the voices of those across the globe who are fighting for their basic human rights”, the actress’ first post read. She continued to relieve her personal experience in Afghanistan with refugees from twenty years ago.

“It is sickening to watch Afghans being displaced yet again out of the fear and uncertainty that has gripped their country”, the actress and human rights advocate said. Jolie also subtly accused the US government of the evident failure, saying: “To spend so much time and money, to have bloodshed and lives lost only to come to this, is a failure almost impossible to understand”.

The second post was titled “The Displaced”. Jolie continued to express her passion for helping people who were chased away from their homes with violence. She captured the photos: “Today, 1% of the world’s population – 82.4 million people – is displaced. That’s nearly twice as many as a decade before”. She appealed to her followers to join her fight for human rights and join the UN refugee account.

Jolie also followed three accounts – NAACP, Doctors Without Borders, and UN refugees. Her posts, on the other hand, were seen more than 5 million times with fans leaving almost 200K comments. The actress definitely made a splash and for a good cause.

Right after making the headlines with her social media appearance, Jolie was seen on the streets of Beverly Hills. The actress, producer, moviemaker, and activist was wearing a long, high-neck black dress coupled with this season’s popular nude pumps. The actress quickly jumped into the black SUV and was on her way without leaving any comment to the paparazzi. 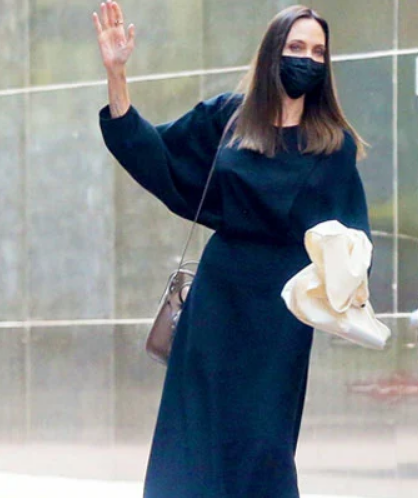 Among many things that Angelina Jolie is busy with, she still managed to work on “Eternals” which is set to come out in November of 2022. It’s one of Marvel’s action flicks directed by Chloe Zhao. Jolie will be playing alongside Kit Harington, Richard Madden, and Gemma Chan. The movie has a budget of $200 million, so the expectations are running high.