Home Celebrities Who Is Lindsay Lohan’s Fiancé, Bader Shammas? Plus The Details On Engagement Ring!
CelebritiesEntertainment

Lindsay Lohan is engaged! The actress announced the amazing news on her Instagram page with selfies of the couple hugging and kissing while Lohan flaunts her engagement ring.

The 35-year old star captioned the set of photos: “My love. My life. My family. My future”, tagging Shammas.

Who is Bader Shammas? He is an investor who graduated in 2010 from the University of South Florida and is currently working at Credit Suisse. Lindsay talked about her 34-year old boyfriend a couple of years ago saying that he “doesn’t like Instagram”, and “hates being in the spotlight”. In fact, the couple is so private that we can’t say for sure for how long they have been together. The newly-engaged pair lives in Dubai, where Lindsay has been residing for the past 7 years.

The “Mean Girls” actress giddily showed off her Harry Winston sparkler on Instagram. Page Six went into depth regarding the ring and based on experts’ opinions it’s a five to seven-carat diamond. “With high color and high clarity, I would estimate the retail value at a cool quarter of a million dollars – $250,000”, said the COO of Rare Carat. Mike Fried, the CEO of The Diamond Pro says that the band is made out of white gold or platinum, and the stone is perhaps “a radiant cut, cushion cut or princess cut”. “The biggest difference is that this time she didn’t have to pay for the ring herself”, the CEO joked about Linday’s last engagement. However, the last time Lindsay got engaged to Russian Egor Tarabasov, it was no laughing matter. The Eastern-European socialite has no real occupation and was living off of the small endorsements. So, Lohan had no choice but to pay for the engagement ring. However, the romance fell apart two years after it started. In 2016 an onlooker filmed Lindsay Lohan and Egor Tarabasov on the beaches of Mykonos, Greece. At one point, the couple was quarreling when Tarabasov physically assaulted Lohan. 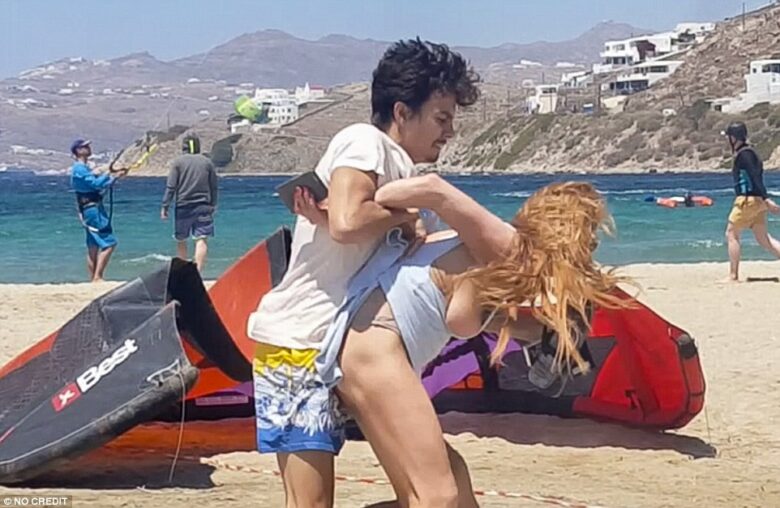 This ended their engagement immediately. It took a couple of years for Lindsay to come to terms with what happened. The troubled Hollywood star talked in 2019 to USA Today, almost three years after the incident. “If anyone has gone through being abused, it was me on that beach, and now I own it. That’s my revenge”.

As far as her career, Lindsay has been under the radar of many Hollywood producers. The last movie she starred in was in 2019, the horror “Among the Shadows”. Before that, Lindsay’s roles were few and far between due to her complicated private life. “Acting scared me for a long time because every time I was doing a movie, people would look at my personal life and that would overshadow the film”, the actress explained.

Still, it appears that the actress is coming back. She is currently filming a Christmas romantic comedy for Netflix. Lohan plays a spoiled hotel heiress engaged to a blue-collar guy that caught the case of “complete amnesia”. Lindsay’s new chick-flick is due in December of 2022.