EXPRESS – 01/14/2020: Twitter users once again attacked Melania Trump. It seems nothing she does can’t satisfy these people. This time around the reason was her video that shows the latest restoration of the White House. We don’t need to tell you that they are happening under her watch.

In recent weeks Melania is often under attacks from various critics and people who only want to troll her. As we said, the most recent debate on her profile was instigated when she shared the video of the White House. East Room, red Room, and Blue Room are all under renovation, and the First Lady decided to share a speed-up video of work being done. 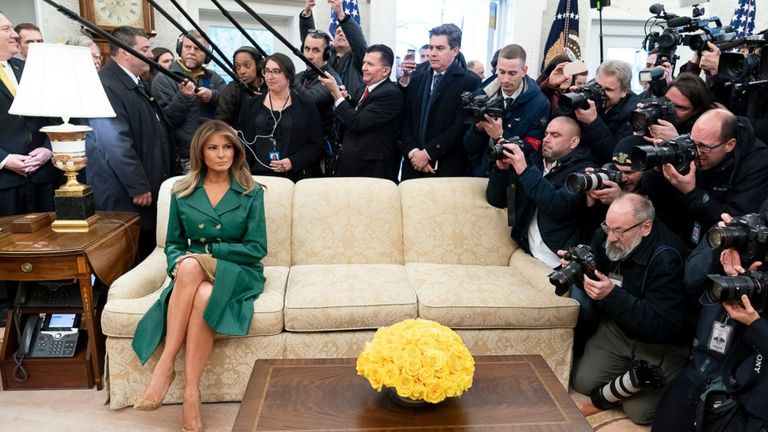 In the description, she wrote that she feels honored with the work being done on the East Room floor restoration and with upholstery in Blue and Red Rooms. All work so far was done in 2019, while the renovations will continue this year, according to the First Lady.

Melania used this post to announce further works and to give praise to all craftsmen of this nation. She believes that work on People’s House and its new look will inspire a sense of pride with the US citizens. But, as it’s usually the case, not everyone can be pleased with someone’s else accomplishment.

One user commented that the White House is going to need exorcists after Donald Trump and Melania leave. Another stated that there are better ways to spend taxpayers’ money. The comments kept going, and there’s seems to be many people dissatisfied with the First Lady.

We were honored to complete the East Room floor restoration along with the wall upholstery in the Red & Blue Rooms in 2019. The work continues in 2020 to display the People’s House as a reflection of the excellence of the nation’s craftsmen and a source of pride for its citizens. pic.twitter.com/89Pl0m2e0d

Some went even further to claim that the White House is going to be restored to its former glory by another First Lady, implying that Trump is going to lose the upcoming elections.

It remains to be seen what will happen after 2020 general elections, but Melania should look to stay away from Twitter in the next few months. She’s not as good at it as her husband.

Donald Trump Was Cheered During Anthem at LSU-Clemson Game

Brad Pitt Was Barely Recognizable in His New Outfit