POP CULTURE – 01/14/2020: Donald Trump was left almost speechless after the National Championship game. This is not something that happens too often. Mr. Trump was cheered by the crowd at the Mercedes Benz Superdome, and they were joyfully screaming ‘USA,’ at the President. This prompted a two-word answer from POTUS: Thank you!

It was known prior to the game that both Donald Trump and his wife Melania Trump are going to attend the National Championship game between Clemson Tigers and LSU Tigers. Security measures around the city and the stadium were heightened. Because of this, many expected that the crowd would be mad at the President thanks to the all additional checkups. 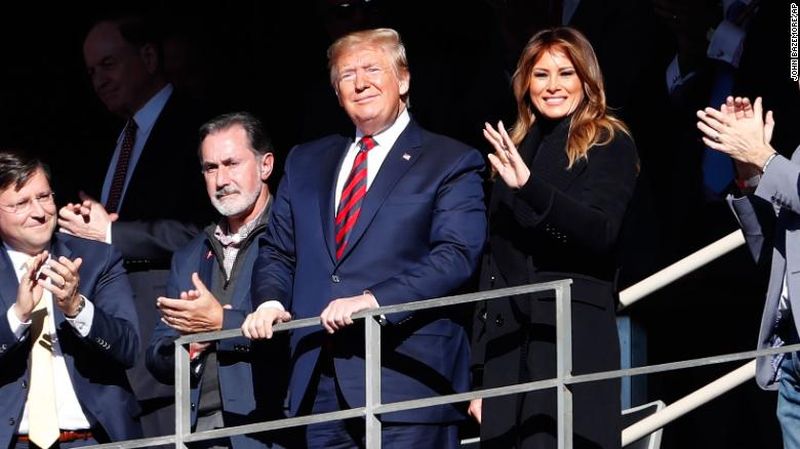 But the fans were on his side. Yes, there were occasional boos, but they were in the minority. Unlike the people in the crowd, those who watched the game from their homes were critical of Trump and his wife. As most appearances that POTUS and FLOTUS make together, this one wasn’t without controversies.

There were those who commented on Melania’s poor taste in fashion because of her coat. Other stated that she needs to stop wearing her super-pricey engagement ring everywhere she goes. Regarding Trump, there were those who didn’t want to see him in New Orleans at all. One Twitter user noticed that Melania, at one point, aggressively pulled her hands from Trump’s, which made it look like she didn’t even want to be there in the first place. Donald was quick to take her hand back.

According to football rules, Trump should be the one to receive a holding penalty for clinging to Melania for too long. The referees didn’t spot it, and the night continued for the pair. Unfortunately, Twitter users did.

The night was not only about football, thanks to the President. But, on the sports side of the evening, LSU Tigers took home the win beating Clemson 42-25.

Brad Pitt Was Barely Recognizable in His New Outfit