Home Celebrities Kanye West And Jay-Z Friendship, Feuds, And All in Between
Celebrities

The fans of rap music pray for the two men to reconcile, and create some amazing music like in old days. Yes, they were good friends, and they weren’t, and today we’re not sure where they stand. This is why we’ll try to take a more in-depth look into their relationship.

Back in 2018, Jay-Z called West his little brother, but that’s not how things are today, as Kanye didn’t forgive Jay-Z for his absence from his wedding with reality TV star Kim Kardashian. It’s strange how things can quickly fall apart. They’re not yesterday’s friends. The two rappers knew each other for more than twenty years. They’ve met back in 2000 when West was discovered by one of Jay-Z’s associates and was employed to work on one of his upcoming albums at the time.

At first, Kanye was a shy young man, trying to make a name for himself in the industry. Yes, he was lacking the confidence he has today. But after working on albums and songs such as This is the Life, Monster, Watch the Throne, and Run This Town, and shaping the hip-hop industry as we know it today he became overconfident. The West we know today is not shy at all. He loves to compare himself to the likes of accomplished individuals such as Michael Jordan, Walt Disney, and Steve Jobs. At one point West even said that he’s in pain that he’ll never be able to see himself perform live. 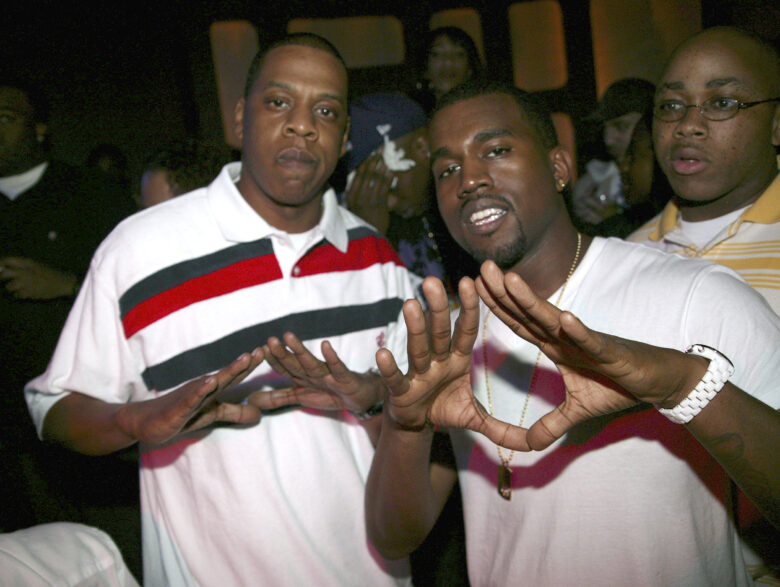 The story of Jay-Z and Kanye West is a story of hard work. When they first started working together, they’ve spent days and nights in the studio. It was all about beats and rhymes. The collaboration between the two was a perfect match. They quickly produced The Blueprint, which is an influential album even today. West did two of the standouts songs on this album including Heart of the City and Never Change. When Jay-Z first heard these songs he said: “Yo, put them joints on CD.”

After the initial success of The Blueprint, Kanye was quickly recognized as one of the brightest young producers in the business. This led to him working with many recognized artists such as Foxy Brown, Lil Kim, and Scarface. While being an established and well-respected producer was all good and well, West wanted one thing more than anything – to be a rapper!

This was not an easy path to take back in the early 2000s. The main topics back in the day were crime, poverty, violence, and streets. This brought out hard-core rappers such as Eminem, Ja Rule, DMX, and Jay-Z. For West, it was hard to align with these subjects as he was raised in the upper-middle class, hardly encountering any of the subjects of the Noughties. 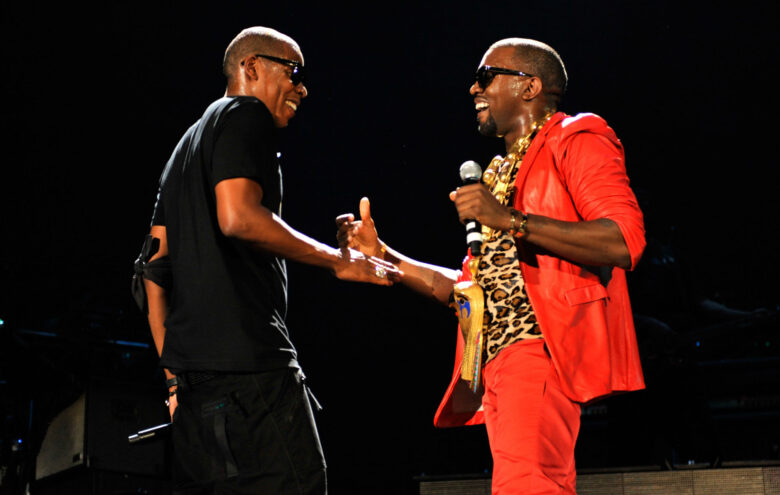 The idea of West being a rapper wasn’t greeted with encouragement by his mentor Jay-Z. Back in 2005, jay had this to say about the subject of Kanye being a rapper: “We all grew up street guys who had to do whatever we had to do to get by. Then there’s Kanye, who to my knowledge has never hustled a day in his life.” But, this was not to stop Kanye. He even thought about leaving Jay-Z’s producing house, and sign with the rival Capitol. This almost came to fruition in 2002. The people from Capitol had this to say about West: “Kanye was never down on himself. He’d be ready to rap on the spot, ready to tell his story on the spot, ready to make a record on the spot. He was probably the hungriest dude I ever saw.”

While the success story was ready to start with the Capitol, the deal fell apart at the last moment, as the head honchos there thought West would never be able to sell his story. Once his stance on a rapping career was evident to anyone, his drive was acknowledged by his original house Roc-A-Fella signed him through Damon Dash, who co-founded the label with Jay-Z. Talking about the event, Dash said: “People were on me like, ‘What you gonna do after this?’ I personally signed Kanye, and I wanna take credit for that because I feel good that I believed in him and I saw his vision. What I didn’t see was how big his vision was and how he was going to attack it himself. He’s like me and Jay put into one. He’s a businessman, he’s an artist, he’s a producer.”

Even after dash going all-in on West, Jay-Z was still not convinced: “I didn’t see how it could work.”These words didn’t affect West. He, for one, didn’t try to be a gangster or a rapper dedicated to social subjects. No, he was above all else – himself. For better or worse, he was a new trendsetter in the business. The subjects he covered were faith, racism, with a changed and introspective view on violence. The new wave he created with different lyrics brought out artists such as Kid Cudi and Drake. He brought a change to the whole genre.

Fast forward to 2007 and West was ready to conquer the world. He already surpassed his master Jay-Z with his third album Graduation. At the same time Jay was trying to get back on track with his Kingdom Come album, but unsuccessfully. It was Kanye’s time. He was a step above Jay-Z in all metrics that mattered – critical acclaim, sales, and most of all cultural relevance. Graduation sold almost 1 million copies in the first week after its release. Some of the songs were even dedicated to Beyonce’s husband such as Big Brother. In this masterpiece West praised and criticizes Jay-Z at the same time by saying: “He got me out my momma crib/ Then he helps me get my momma a crib,” and “I guess big brother was thinkin’ a little different/ And kept little brother at bay, at a distance.”’ 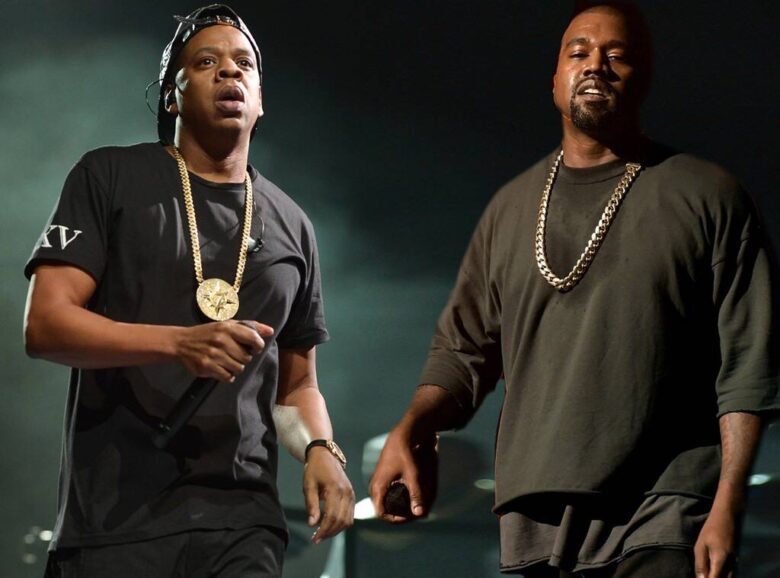 Despite the rivalry that started brewing, the two men showed the world they’re still good friends and excellent co-workers. Watch the Throne is the album they created together, and it was something unseen at the time it was released. They released 16 tracks focused on being Black and rich in America. The beast and lyrics came from both ends, with jay-Z being praised for his beats on capitalism, greatness, and success, while Kanye impressed everyone with his ideas and leadership. For everyone, the album was perfection, and on the outside it was. But, behind the scenes, it was more different at two men more than often locked their horns. One of the issues was that some of the beats were preserved by Jay-Z for his 12th album, Magna Carta Holy Grail. Despite this, the Watch the Throne tour went on and was completed with success.

This album was released in 2011, and while things seemed great back then to the onlookers, in 2014 it was clear that something is off. It all started with Jay-Z and Beyonce missing Kanye West and Kim Kardashian’s wedding. Until then it was believed that the couple was good friends. The reasons why did this happened, remain unclear. What’s clear is that Kanye was not happy: “I was hurt about them not coming to the wedding. I understand they were going through some things, but if it’s family, you’re not going to miss a wedding.”But, at the time Jay-Z was putting his family to the forefront. In 2016 it became evident that he and Beyonce were going through a rough time, caused by Jay-Z’s infidelity. Both of them released albums that contained lyrics addressing both the infidelity and their absence from Kanye’s wedding.

While Jay-Z was going through hell, at the same time, West was reaching the top. The Life of Pablo album was edited live by Kanye West, and it was viewed by millions of fans. West was basically the most famous man on the planet, which brought a lot of pressure on his shoulders, with people even suggesting he was going through a mental breakdown. At one point things turned south really quickly, and in addition to dealing with pressure, Kim was robbed of jewelry and items worth north of $10 million.

This is where it became more than evident that Jay-Z and Kanye are no longer friends. During his The Life of Pablo tour, West addressed the unfortunate events and people’s reactions: “Don’t call me after the robbery and say, ‘How you feelin?’ You wanna know how I’m feelin? “Come by the house. Bring the kids by the house. Like we’re brothers. Let’s sit down.” West was distraught, and soon after he was admitted to a hospital citing hallucinations, bipolar disorder suicidal thoughts, and depression as reasons. While two exchanged heavy words, and shots were fired both live and through songs, in 2017 Jay-Z called West ‘a brother,’ with admitting that they have a complicated relationship. At Sean Combs’s 50th birthday party in 2019, the pair were seen hugging, which was all that fans wanted to see.

Today, it would seem they have found a way to reconcile, and have a normal relationship. The old wounds were deep, but with time, it seems they have managed to heal. The proof of this was the listening session for West’s 10th studio album, Donda. The final song is a collaboration between West and Jay-Z, which opened a door for Watch the Throne part two. The two just light a fire that showed the world what they’re able to do. We’re talking about the music that is, as it once was: exceptional, appalling, and boundless.