U.S. President Donald Trump honored Jon Voight, one of his few followers in Hollywood, with the National Medal of the Arts, calling him “one of the greatest living film legends.”

“Jon is an extremely quality actor (…) and, by chance, someone I really love,” Trump added.

Jon Voight danced briefly on stage in the White House as the theme from the “Midnight Cowboy” played while President Donald Trump prepared to award him the National Medal of Arts.

A White House announced last week that Voight would be one of four recipients of the highest American government honor to artists and stated he was chosen “for his exceptional capacity as an actor to portray deeply complex characters. Captivating audiences, he has given us insights into the richness of the human mind and heart.”

The 80-year-old actor, the father of actress Angelina Jolie, became famous for his role in the “Midnight Cowboy” from 1969, starring Dustin Hoffman.

“Fantastic movie,” the US president exclaimed.

Jon Voight is also remembered for his role in the 1972 film “Deliverance” with Burt Reynolds. He received the Academy Award for Best Actor in 1978 for the Vietnam war drama “Coming Home.”

The actor announced in spring 2016 that he supports the real estate magnate Donald Trump and then in the presidential campaign, he did not cease to praise him. 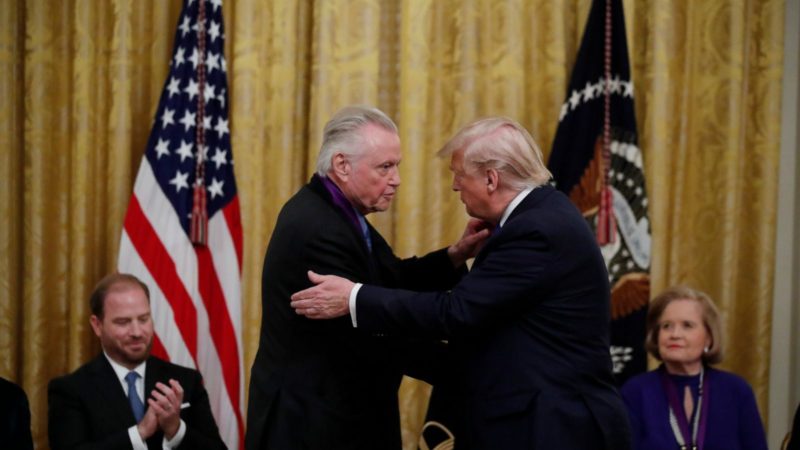 “I, Jon Voight, can say without a doubt that Donald is funny, playful, and colorful, but most of all, he is honest. He has no bull to sell, and everyone will discover the bull most politicians spew out is for their own causes and benefits”, Voight said to the Breibart News in March 2016.

He reiterated his unconditional support for the Republican billionaire many times, assessing as early as May this year that he was “the greatest president since Abraham Lincoln.”

Awarding medals to prominent figures in the art world has been a tradition during Barack Obama’s two terms, but this is the first time Donald Trump has taken it since becoming president in January 2017.