DAILY MAIL – 02/06/2020: Things aren’t going well for Ivanka Trump after her video from the State of the Union went viral. The first daughter had good intentions, we don’t doubt that, but the road to hell is paved with good intentions. Instead, her video is described as a nightmare, and Internet users feel unsettled by it.

The video looks like an amateur horror movie. It was filmed by a close-up camera with a black background. In the clip, Ivanka Trump talks about the US economy, which is thriving under the guidance of her father. She also touches on the subjects of foreign policy. But, the message was left hanging because of how it was filmed. Most people compared it to The Blair Witch Project. The movie The Ring was also mentioned. Both are scary movies. 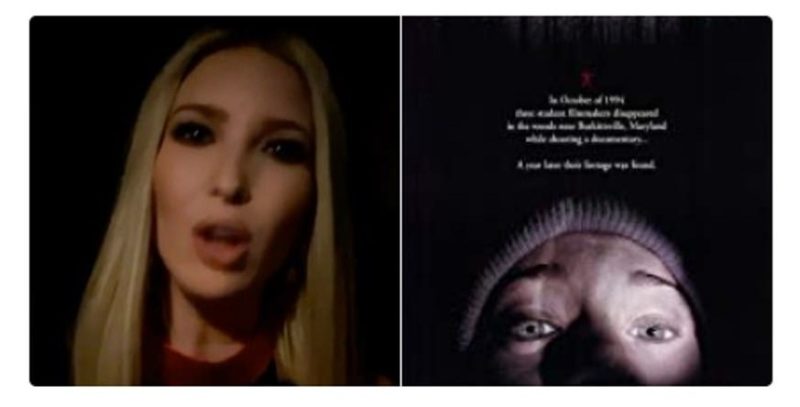 One Twitter user mentioned that it looks like Ivanka was remaking the tent scene from The Blair Witch Project. The reason the first daughter made this video was to promote her father’s politics. After finishing her statement, she sat in the care and went to see President Donald Trump giving his speech at the State of the Union.

Ivanka Trump called all of her followers to be by their TV’s and watch her father giving a speech which would describe his vision for prosperous America. But, it was hard for them to stay focused as they were already distracted by her video. The comparison to a plethora of movies continued as 1992 film Candyman entered the mix. Some claimed that Ivanka could easily pass as a member fo the Queen band in their Bohemian Rhapsody music video.

While the video was creepy, Ivanka Trump looked nothing of the sort at her State of the Union appearance where she appeared in black sateen dress and red heels. It seems Ivanka wanted to send a message to women of the Democrat block who all wore white attire.