How Will Donald Trump Explain Air Force One Blunder at Daytona?

CNN – 02/17/2020: Donald Trump visited the NASCAR race on Sunday. Just like anything else regarding Trump, there was a blunder, including his visit. Trump’s campaign manager shared a photo of Air Force One flying over Daytona. This wouldn’t be strange if the picture weren’t from 2004. It wasn’t Donald Trump in the Air Force One, but it was President George W. Bush.

The man who made a grave mistake, for unknown reasons, was Brad Parscale, Trump’s campaign manager. His Twitter post said, “@realDonaldTrump won the #Daytona500 before the race even started.” It remains unclear why did he share a photo from 2004 which shows Air Force one flying over crowded stands at Daytona. 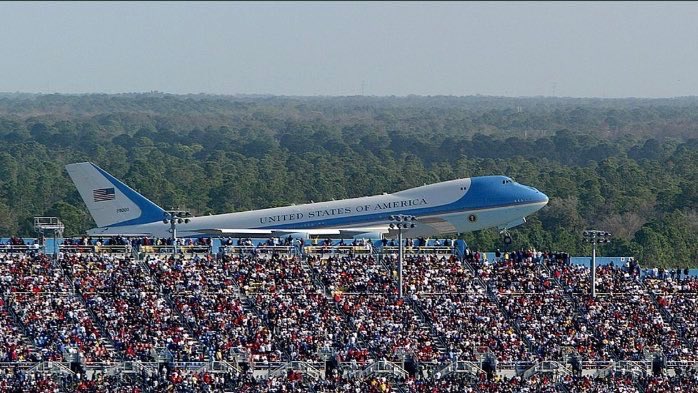 The controversial photo wasn’t removed immediately. It stood on Twitter for couple of hours before being taken off. In the mid-time, it collected 6,700 re-tweets and 23,000 likes. Trump supporters didn’t saw anything funny with the photo commenting on it proudly.

Those who follow NASCAR closer noticed that it was an old photo. It was taken on February 15th, 2004, by a photographer Jonathan Ferrey. He also gave his comment on the situation, saying: “I have a lot of talented colleagues photographing the Daytona 500 this year. I am unfortunately not there today, but apparently, I won the Daytona 500 photography before the race even started.”

The photo form 2004 was used before in numerous articles. Because of this, it is strange why they put this photo. The issues might be that the stands weren’t full when Donald Trump arrived.

Brad Parscale changed the photo in a tweet that followed. It shows Air Force One with Donald Trump on it. The one issue we can notice is that there weren’t nearly as many people for Trump as it was for George W. Bush in 2004.

lol here’s the one that brad the shitbird had to delete because it was for a different president pic.twitter.com/x0JafX6vxf

Alessandra Ambrosio Posts Stuns With a Photo With Boyfriend