After noticing a small boat capsized in the local Pagan River, Soldier Timothy Decker, who was on his morning run, dived into the water to save an older man George Gray.

Decker heard yelling coming from the river, and after he found out where is the man located, the U.S. Army Major jumped into the water and swam 75 meters to get to Gray, who was struggling to stay afloat, gripping onto the side of the boat.

The 82-year-old man from Smithfield, Virginia, managed to turn the boat upright, but the boat remained filled with water. “Once we couldn’t get the boat drained, I decided to have him hold on to it like a flotation device as I swam and pulled him and the boat,” Decker said. “After about a minute of trying that I realized we weren’t making any progress to get closer to the shoreline.” 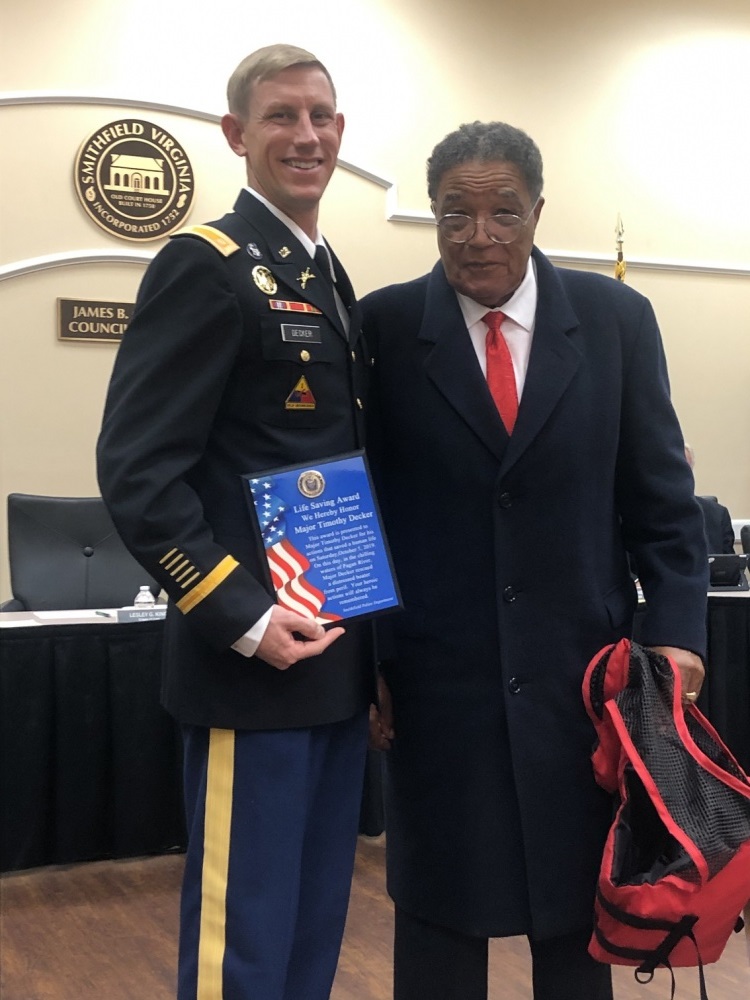 Decker than tried to swim back to where he dove in, but he failed at the first attempt because he was swimming against the current. He tried to change directions and started swimming perpendicular to the current. “I was extremely exhausted, but I could see we were making progress, so I just pushed ahead. It took us five to seven minutes to reach a dock”, Decker explained.

According to Decker, Gray remained calm during the whole incident. “It was pretty instantaneous from when he stepped foot on to the dock; he broke down in tears and gave me a big hug,” Decker said. “It was a very humbling experience.”

Police and the ambulance were waiting for the men on the shore.

Smithfield Police Department awarded Major Timothy Decker with the city’s Life-Saving Award for saving the life of a fellow citizen in an emergency. “I think anyone would have done what I did if they were in that situation. I’m just happy I was there to help”, Decker said.

“I’m just thankful to be alive,” Gray said. “I was hanging on to the boat, and I had on a really heavy coat, and if it wasn’t for Decker, I wouldn’t be here today.”

For Him – Advice on The Outfit to Wear to...

What Are The Steps In The Construction Of Floating Docks?...

Lost In Assignments – What To Do?