REUTERS – 12/30/2019: Greta Thunberg and Donald Trump were both present at the United Nations summit on global warming. But they didn’t talk to each other. Young climate change activist said that she didn’t want to talk to the US President. Thunberg told that talking to Mr. Trump would be a waste of time. She believes that 45th US President wouldn’t even pay attention to what she has to say.

Thunberg talked about her beef with Mr. Trump during a BBC radio interview. She described Trump’s attacks as ‘funny,’ and now that she is out of Mr. President’s focus going back to normal life would be nice. 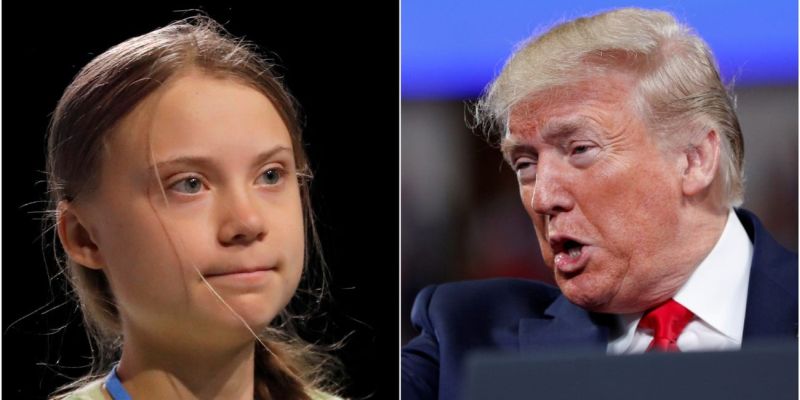 Greta Thunberg and Donald Trump shared the stage once before at a United Nations summit in New York in September. That time camera caught Thunberg giving the US President a stare with killing intent. The young Swedish climate change fighter and Donald Trump have little in common. As you probably know, President Trump doesn’t believe in climate science and has pulled the United States from the 2015 Paris Agreement.

Read Also: Ivanka Trump Not Sure That She Will Be Next To Her Father in 2020

Greta was asked what she would say to Mr. Presdient if she were given a chance. Thunberg responded that she wouldn’t waste her breath, as Trump is not willing to listen to experts and scientists, so what opportunities would a 16-year old girl have.

Trump is not alone in his attacks on Thunberg as Brazilian President Jair Bolsonara also took a dig at Thunbger by calling her a ‘brat.’ Greta isn’t paying too much attention to what these two have to say as she believes that their attacks are a sign of fear that there are going to be more and more young people pointing out the issues of global warming.

Greta Thunberg became world-famous after she started global warming campaigning in front of the Swedish Parliament every Friday, missing school in the process. Her actions inspired millions of people around the world to take part in global warming campaigns. This involvement made her Times Person of the Year.