Tesco’s Christmas ad titled “This Christmas, Nothing’s Stopping Us” might come to a screeching halt. The campaign caused an uproar on social media by the unvaccinated population claiming discrimination based on vaccination status.

The 90-second commercial is showing Santa Clause arriving from the North Pole at the London airport. In the next scene, a TV reporter is saying: “Oh, no, Santa could be quarantined!”, to which Father Christmas pulls out his CoViD Passport showing it to the border patrol. 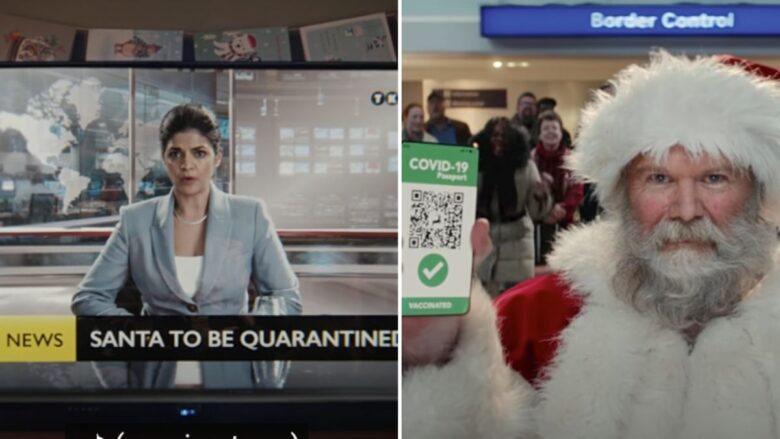 Tesco’s inspiration for the controversial ad was last year’s Christmas that was celebrated under strict limitations. The spokesperson for the company issued a statement saying: “We respect everyone’s views and we know that Christmas is a hugely important time for many of our customers and, after last year’s events, that is truer now than ever. We set out to create a campaign that took a light-hearted view on how the nation is feeling and it has been well-received by colleagues and customers. We are still in the midst of a pandemic and the advert reflects the current rules and regulations regarding international travel”.

Although the commercial creators might have the best intentions in heart, the row on social media is not settling down. In the UK, as of now, 68.5% of the population has been fully vaccinated which leaves a bit less than one-third of those refusing to get the jab. Gillian McKeith, a nutritionist, has been one of the loudest voices on Twitter urging people to not get the vaccine. She claims that the virus can be subdued by eating healthy combined with a regular intake of additional vitamins.

#tesco has a new Christmas advert that celebrates #discrimination & #segregation via a fully jabbed Santa who shows his medical status! Who in their right mind in management thought this was a good idea? If you don’t #BoycottTesco then you are #complicit pic.twitter.com/RcR8EsJC42

“#tesco has a new Christmas advert that celebrates #discrimination & #segregation via a fully jabbed Santa who shows his medical status! Who in their right mind in management thought this was a good idea? If you don’t #BoycottTesco then you are #complicit”, McKeith Tweeted.

Many joined the thread expressing their disbelief and disgust with the pretentious and suggestive commercial. “Did I really just see a Christmas TV ad on ITV for Tesco to Queen’s ‘Don’t Stop me Now’ hit with families having fun / flying abroad etc & then a guy smiling flashing up his smartphone with a COVID passport on it?? Omg, I am NEVER shopping at Tesco again #boycottTesco not ok”, one Tweet read.  “Unacceptable and despicable. HUGE mistake on your part”, another user said.

However, there were some words of support coming to Tesco’s way too. “I am fully complicit!!! Will continue to shop at Tesco and support any company that promotes the safety of its shoppers! #WellDoneTesco #TescoSavesLives”, one shopper Tweeted.

Heading to Tesco now, safe in the knowledge that all the antivaxers have decided to #BoycottTesco becsuse they got triggered by Santa showing a Covid pass in an advert.

Thanks for doing your bit to keep us all safe. Stay home. pic.twitter.com/cjTFh9VLVj

The court of public opinion is one thing, but The Advertising Standards Authority (ASA) will have the final word. Over 3,000 complaints so far have been filed against the problematic ad. The public is asking for the commercial to be taken down since it’s prejudicial towards the unvaccinated population.

A spokesperson for ASA commented on the current situation: “We’ve received over 3,000 complaints regarding this ad. We are currently carefully reviewing these complaints to determine whether there are any grounds for further action. The large majority of complaints assert that the ad is coercive, and encourages medical discrimination based on vaccine status”.

Donald Trump Again Calls For Joe Biden to do This...

4 Tips For Planning A Trip To Lauterbrunnen In Switzerland