RAW STORY – 02/26/2020: Donald Trump doesn’t always get along with the media. Coronavirus gave him another reason to blast a full-blown attack on all media outlets. President Trump accused them of spreading panic across the States. This happened even after the Center for Disease Control warned the US citizens that the outbreak is possible.

As it’s usually the case, POTUS started with a blast on CNN reporters: “Low Ratings Fake News MSDNC (Comcast) & CNN are doing everything possible to make the Coronavirus (sic) look as bad as possible, including panicking markets, if possible.” 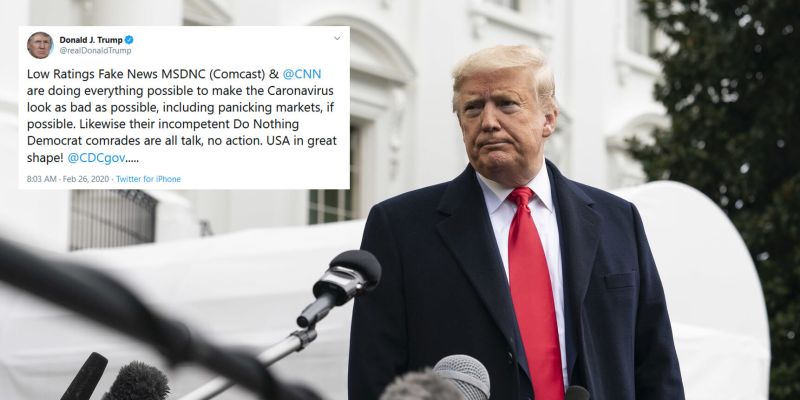 The proof that things never change with Mr. President is the second part of his tweet. Same as always, the part of the blame is on the democrats: “Likewise their incompetent Do Nothing Democrat comrades are all talk, no action. USA in great shape!”

While Democrats, together with media outlets, do complain that Donald Trump and his administration are not doing enough to prepare for possible coronavirus outbreak, President begs to disagree. Mr. Trump claims that he’s handling the crisis well, and announced a White House briefing on the subject for later today.

While there’s no outbreak of the named virus in the United States so far, the mere possibility of it is affecting the US trade and economy. In the last two days, the Dow Jones Industrial Average went down for almost 2,000 points. The fact that federal officials are giving contradictory statements is doing nothing to help with the issues on hands.

Low Ratings Fake News MSDNC (Comcast) & @CNN are doing everything possible to make the Caronavirus look as bad as possible, including panicking markets, if possible. Likewise their incompetent Do Nothing Democrat comrades are all talk, no action. USA in great shape! @CDCgov…..

Director of the National Center for Immunization and Respiratory Diseases at the CDC, Dr. Nancy Messonnier, stated that if an outbreak happens, it could be ‘’bad.’’ Just hours after her statement, Larry Kudlow, Trump’s economic adviser, appeared on CNBC with a claim that the coronavirus has already been dealt with, calling it ‘’contained.’’